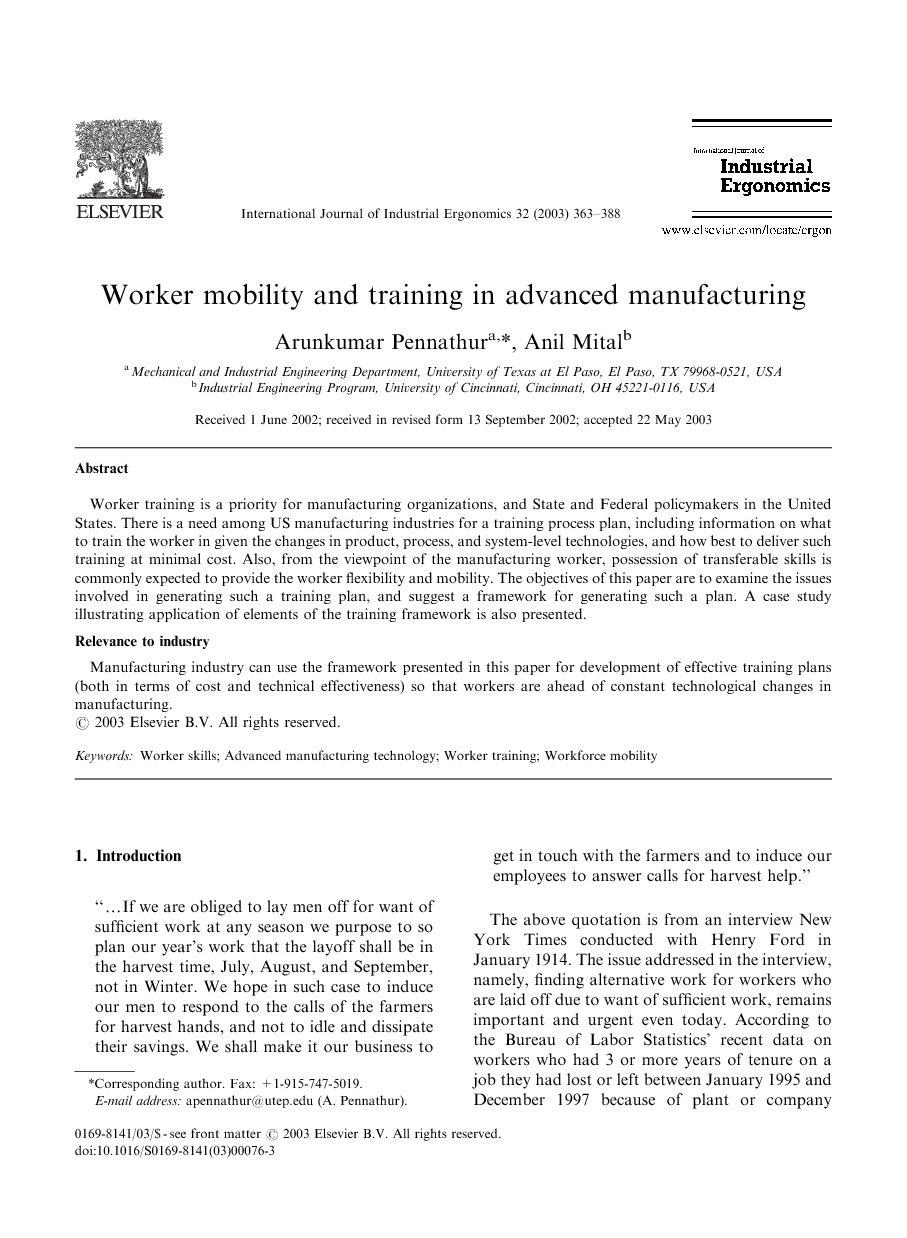 Worker training is a priority for manufacturing organizations, and State and Federal policymakers in the United States. There is a need among US manufacturing industries for a training process plan, including information on what to train the worker in given the changes in product, process, and system-level technologies, and how best to deliver such training at minimal cost. Also, from the viewpoint of the manufacturing worker, possession of transferable skills is commonly expected to provide the worker flexibility and mobility. The objectives of this paper are to examine the issues involved in generating such a training plan, and suggest a framework for generating such a plan. A case study illustrating application of elements of the training framework is also presented.

A theoretical research framework is intended to conceptualize definitions, constructs, and research variables involved in a problem, and suggest possible hypotheses for research. Research using the framework presented in this paper will be iterative in nature—development of a training plan (including the instructional contents in the plan, and the best method to deliver such instruction), followed by a determination of how effectively the plan transfers to as many industries as possible, followed by a refinement of the training plan to increase the effectiveness of transfer to any one industry or extend the transfer base by including more industries. There are a number of issues in this iterative process that need to be addressed. Foremost among these are: (a) cataloguing the specific product, process, and system technologies in current use, and that are anticipated in future (any technology in the prototype stage, for example), in the discrete product manufacturing industries that are participants in any work involving the framework; (b) based on input from each industrial participant, and based on the framework elements for skill development, developing generic skill sets containing the instructions (the meta-knowledge, the rules, and skills needed to operate technology); (c) experimentation (including all the traditional training variables from industrial psychology) with the developed skill set including determination of good training methods for imparting the generated common (to all industries) skill set; (d) development of a measurement system for determining the effectiveness of the transfer to each industry participant, and thereby, the mobility that the training plan can provide a trainee; (e) once a measure for mobility is established, one of the specific hypothesis that can be tested is: does the longitudinal training model ( Fig. 2) presented as part of the framework result in greater mobility, or does the cross-training model ( Fig. 3) result in greater mobility? (f) an important contribution of research with the framework will be integration of manufacturing engineering and cognitive engineering precepts—for instance, development of an effective training plan will provide deeper insight into how humans learn; this insight can ultimately be used in designing technology that will facilitate human operation, and not require any training for its use; the eventual goal will be the design and operation of human-centered manufacturing systems, that use the skills that humans inherently bring into an activity; (g) research using the framework can also contribute significantly to knowledge in the labor economics field, specifically, the concept of human capital (where training the human is considered an investment) and the enhancement of human capital; (h) another important offshoot of the results from this framework will be the integration of the skills and training knowledge base in the curriculum of schools and other training providers—training is a big budget activity in the USA, and the availability of an effective training plan that minimizes cost will result in a better utilization of available resources; and (i) the framework, in itself, is subject to revision and change—with the emergence of newer forms of work such as telecommuting to work, remote manipulation, etc., any framework for imparting skills and training should be flexible as well.