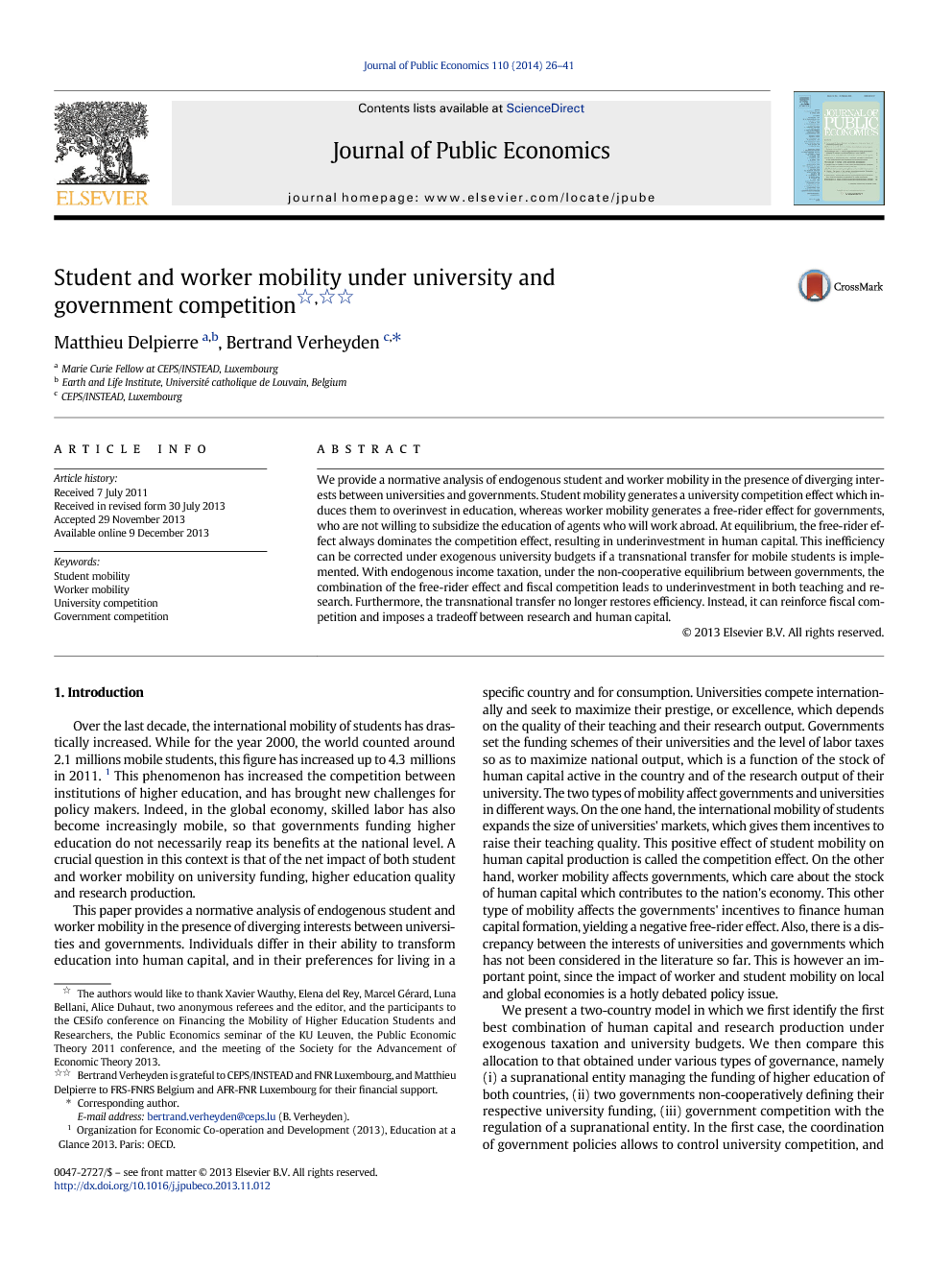 We provide a normative analysis of endogenous student and worker mobility in the presence of diverging interests between universities and governments. Student mobility generates a university competition effect which induces them to overinvest in education, whereas worker mobility generates a free-rider effect for governments, who are not willing to subsidize the education of agents who will work abroad. At equilibrium, the free-rider effect always dominates the competition effect, resulting in underinvestment in human capital. This inefficiency can be corrected under exogenous university budgets if a transnational transfer for mobile students is implemented. With endogenous income taxation, under the non-cooperative equilibrium between governments, the combination of the free-rider effect and fiscal competition leads to underinvestment in both teaching and research. Furthermore, the transnational transfer no longer restores efficiency. Instead, it can reinforce fiscal competition and imposes a tradeoff between research and human capital.

In this paper, we have analyzed the impacts of student and worker international mobility on human capital production, research, university funding and fiscal competition. In a framework in which governments and universities' objectives differ, we show that the free-rider effect between governments dominates the university competition effect induced by student mobility. This negative effect on human capital production stems from the fact that governments do not fully internalize the effect of their investment in human capital formation, because the foreign university only partially reacts to this investment. The magnitude of this effect depends on the distribution of agents' characteristics in the population, and in particular on the correlation between multicultural skills and the taste for living in the home country. If this correlation is negative, then the free-rider problem is relatively weak, since it means that mobile students are more inclined to stay in the country where they studied. If university budgets are endogenous and rely on labor taxation, fiscal competition reinforces this negative effect on human capital production, but also negatively affects the production of research. A transnational transfer made by the government of the country sending students abroad to the recipient country allows to correct the free-rider effect, but may reinforce fiscal competition. As a result, the introduction of a transnational transfer is likely to be detrimental to the production of research. The model presented in this paper integrates many important features of this literature, such as student and worker mobility, quality competition by universities, university funding and fiscal competition by governments. The model constitutes an interesting technical challenge in a relatively general setting. Indeed, the core of the analysis consists in a non-cooperative game between two principals (governments) competing by designing instruments (funding schemes) affecting two competing agents (universities), who themselves rely on a third set of players (students/workers). It is further extended by introducing a second policy instrument (taxation) affecting individuals, and a supranational planner attempting to correct the two principals' inefficient policies. Still, the model does not allow for the possibility for universities to compete simultaneously in quality and prices, which are assumed to be zero. In the European context, this is an acceptable simplification, although integrating tuition fees into the analysis would be an interesting avenue for future research.