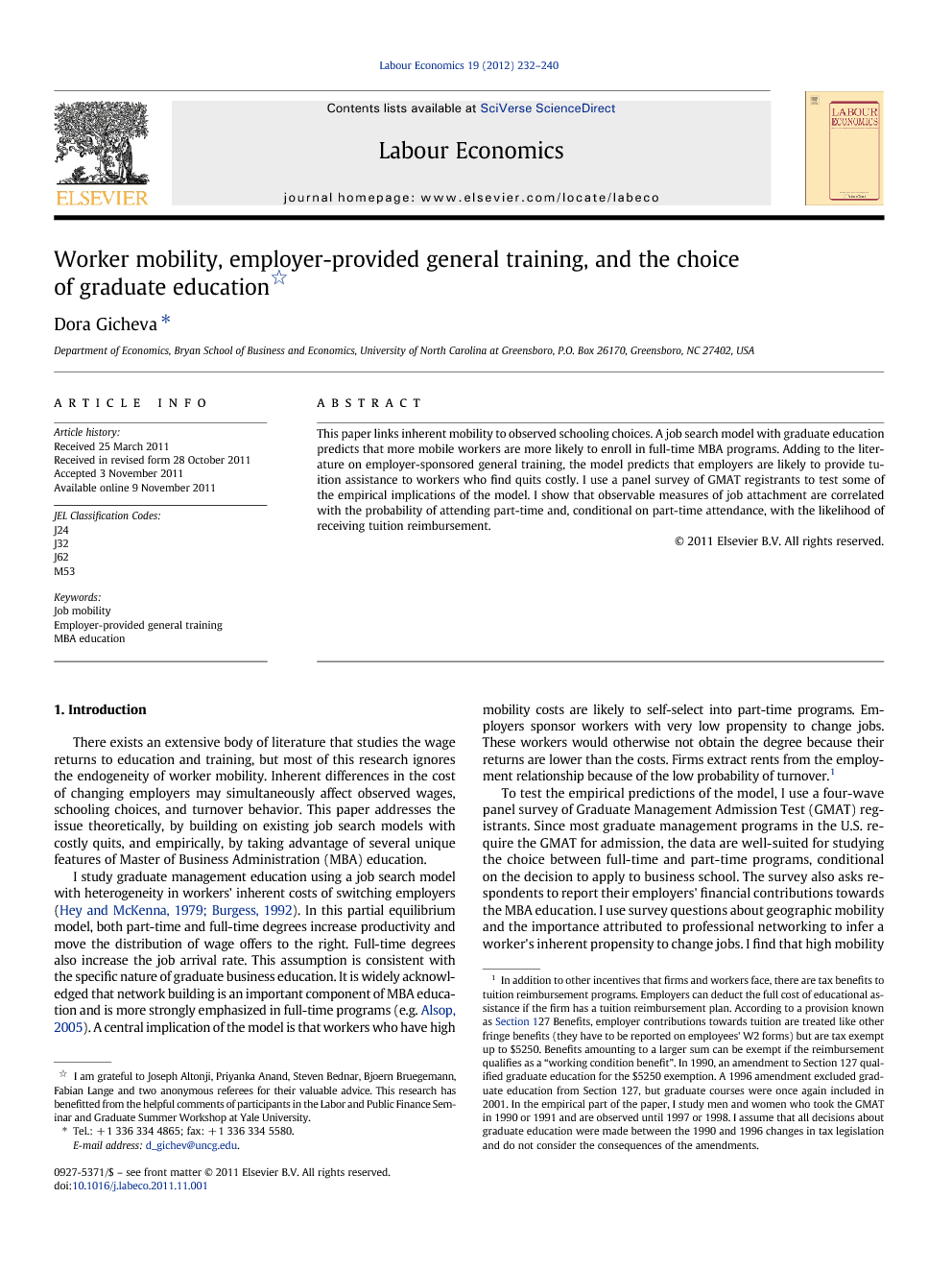 This paper links inherent mobility to observed schooling choices. A job search model with graduate education predicts that more mobile workers are more likely to enroll in full-time MBA programs. Adding to the literature on employer-sponsored general training, the model predicts that employers are likely to provide tuition assistance to workers who find quits costly. I use a panel survey of GMAT registrants to test some of the empirical implications of the model. I show that observable measures of job attachment are correlated with the probability of attending part-time and, conditional on part-time attendance, with the likelihood of receiving tuition reimbursement.

There exists an extensive body of literature that studies the wage returns to education and training, but most of this research ignores the endogeneity of worker mobility. Inherent differences in the cost of changing employers may simultaneously affect observed wages, schooling choices, and turnover behavior. This paper addresses the issue theoretically, by building on existing job search models with costly quits, and empirically, by taking advantage of several unique features of Master of Business Administration (MBA) education. I study graduate management education using a job search model with heterogeneity in workers' inherent costs of switching employers (Hey and McKenna, 1979 and Burgess, 1992). In this partial equilibrium model, both part-time and full-time degrees increase productivity and move the distribution of wage offers to the right. Full-time degrees also increase the job arrival rate. This assumption is consistent with the specific nature of graduate business education. It is widely acknowledged that network building is an important component of MBA education and is more strongly emphasized in full-time programs (e.g. Alsop, 2005). A central implication of the model is that workers who have high mobility costs are likely to self-select into part-time programs. Employers sponsor workers with very low propensity to change jobs. These workers would otherwise not obtain the degree because their returns are lower than the costs. Firms extract rents from the employment relationship because of the low probability of turnover.1 To test the empirical predictions of the model, I use a four-wave panel survey of Graduate Management Admission Test (GMAT) registrants. Since most graduate management programs in the U.S. require the GMAT for admission, the data are well-suited for studying the choice between full-time and part-time programs, conditional on the decision to apply to business school. The survey also asks respondents to report their employers' financial contributions towards the MBA education. I use survey questions about geographic mobility and the importance attributed to professional networking to infer a worker's inherent propensity to change jobs. I find that high mobility costs are positively correlated with the probability of attending a part-time program and, conditional on part-time attendance, with the likelihood of receiving employer-provided tuition reimbursement. It is also consistent with the theoretical model that only about one half of part-time MBA graduates who are sponsored report a new employer in their first post-graduation survey, while about 91% of full-time business school graduates change firms after graduation.2 Because an MBA degree provides more general than firm-specific human capital, my study also adds to the literature on employer-provided general training. Becker (1964) is the first to point out that in a competitive labor market firms do not have an incentive to pay for general human capital. Workers have to be paid the full value of their general skills, hence employers cannot recoup the cost of training. However, MBA education is one of many examples of a labor market setting in which firms pay for general human capital, and numerous studies have attempted to provide a justification. A key assumption in Becker's (1964) theory is that the labor market is competitive; Acemoglu et al. (1999a) relaxes this assumption and argues that distortions in the wage profile of skilled workers make general skills equivalent to specific skills. When employers earn higher rents at higher levels of human capital, they have an incentive to cover part of the cost of general training. Acemoglu and Pischke (1999a) proposes several causes of wage distortion, including quitting costs that are increasing with skill and complementarity between specific and general skills. Several other recent studies examine firm-sponsored tuition reimbursement programs in the context of labor turnover. Cappelli (2004) investigates tuition reimbursement programs for undergraduate education and suggests that such programs serve to attract and retain better workers. He argues that workers who receive tuition assistance are committed to staying with their employer until obtaining a degree. Manchester's (2008) study presents evidence that workers who do not intend to change jobs self-select into firms that offer tuition assistance. Benson et al. (2004) show evidence that tuition reimbursement programs are more effective in worker retention when employees are promoted after earning a degree. Their result is relevant for MBA education, where promotions upon degree completion are common. My study is the first to analyze schooling decisions by looking at the choice between part-time and full-time graduate management education. Unlike other studies of employer-provided general training that treat mobility as an outcome of the training program, I model the cost of changing employers as a source of worker heterogeneity. The theory can explain several stylized facts from the literature, as well as some previously undocumented empirical relationships. The theoretical model is presented in the next section. Section 3.1 describes the data used in the empirical portion of the study. I show evidence in Section 3.2 that employers do not try to recoup the cost of tuition reimbursement by paying lower wages. Using a subsample of GMAT registrants who did not enroll in an MBA program, I test the validity of the GMAT Survey mobility measures in Section 3.3. The main implications of the model are tested in Sections 3.4 and 3.5, and Section 4 concludes.

The endogeneity of worker mobility in a situation in which firms sponsor the accumulation of general human capital is addressed in this paper theoretically, with a job search model, and empirically, using survey responses that are shown to be correlated with unobserved mobility costs. I model MBA education using a search model that incorporates a specific feature of graduate management education: part-time MBA degrees are less costly but provide less networking capital than full-time degrees. This difference is modeled through variations in the job arrival rate. The model also incorporates heterogeneous costs of switching jobs. I use a unique data set of GMAT takers to perform reduced-form tests of the empirical implications of the model. The theory predicts that part-time degrees are preferred by workers with high mobility costs, who are less likely to take advantage of the increase in the likelihood of a job offer. Firms extract a positive surplus, which is increasing in tenure, from hiring MBA graduates. Employers are willing to sponsor workers with low propensity to quit, who have high reservation wages and a low likelihood of accepting an outside offer. I utilize two survey questions to measure inherent job mobility, one about the importance of location and another about the importance of the networking value of an MBA degree. I use these correlates of the cost of changing jobs to show that more mobile workers are more likely to enroll in a full-time MBA program. I also show that among part-time MBA students, those who are inherently less likely to switch employers are also more likely to receive tuition assistance from their firm. My results are in line with other studies of employer-provided general training, like Cappelli (2004), that suggest that by paying for general skills, employers change the composition of their workforce. One mechanism through which firms can target tuition assistance programs at less mobile workers is through the hiring process: Barron et al. (1997) make a similar argument and show that employers who offer extensive training programs go through a more thorough screening process to select high-ability workers. While I exploit some features specific to graduate business education, the main conclusions can be generalized to other settings in which workers and their employers invest in human capital accumulation. There is no obvious reason for mobility costs to affect only decisions related to MBA program choice. The cost of switching employers can be related to other schooling decisions, for example whether to attend college and how much to invest in an undergraduate degree.