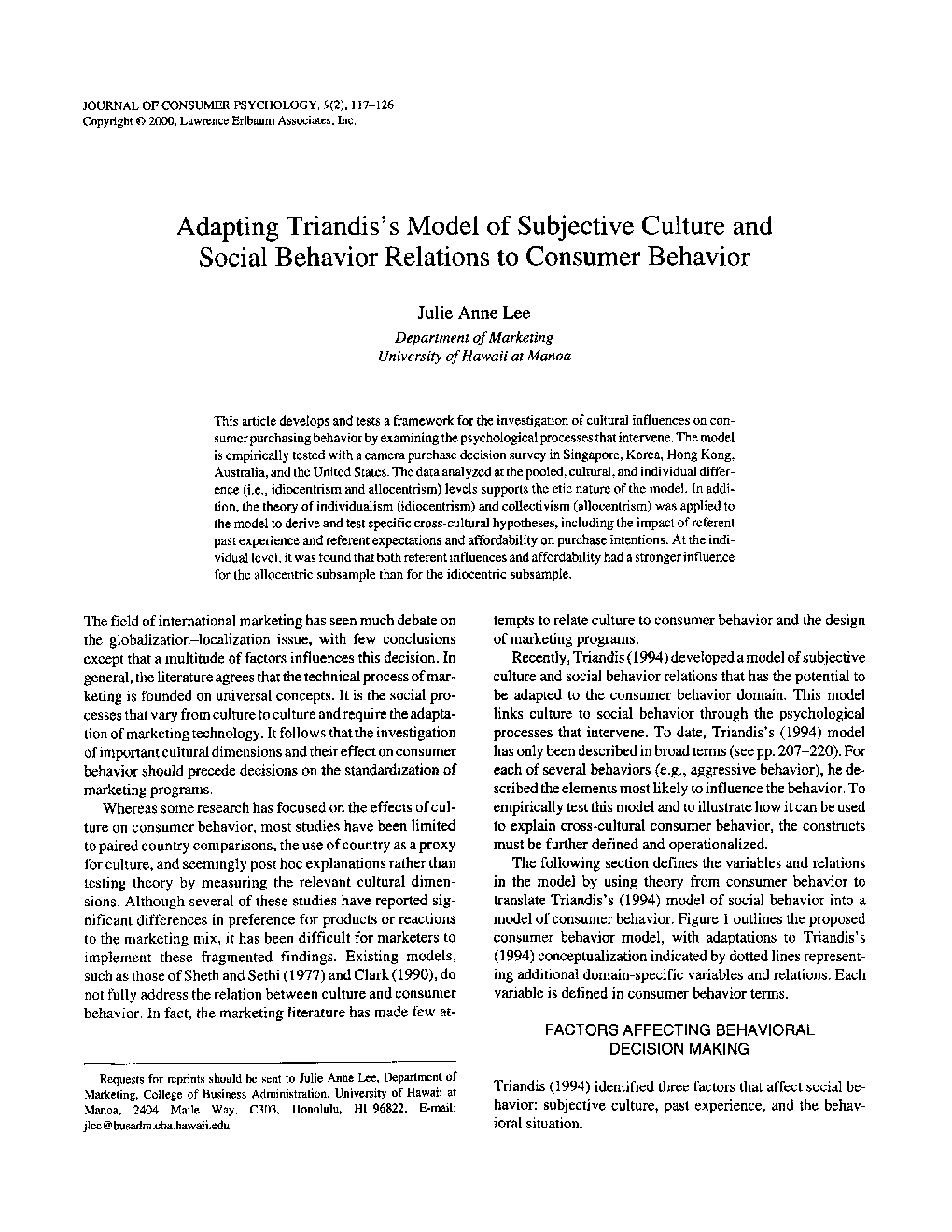 This article develops and tests a framework for the investigation of cultural influences on consumer purchasing behavior by examining the psychological processes that intervene. The model is empirically tested with a camera purchase decision survey in Singapore, Korea, Hong Kong, Australia, and the United States. The data analyzed at the pooled, cultural, and individual difference (i.e., idiocentrism and allocentrism) levels supports the etic nature of the model. In addition, the theory of individualism (idiocentrism) and collectivism (allocentrism) was applied to the model to derive and test specific cross-cultural hypotheses, including the impact of referent past experience and referent expectations and affordability on purchase intentions. At the individual level, it was found that both referent influences and affordability had a stronger influence for the allocentric subsample than for the idiocentric subsample.

This study contributes to the literature by adapting Triandis's (1994) model, which had not been fully specified or empirically tested, to the consumer behavior domain. This study, using camera category choice intentions, found strong support for the proposed model with respondents from five nations.Notably, the overall fit for the proposed model (with additional paths derived from the consumer behavior literature) was significantly better than for the original conceptualization based directly on Triandis's (1994) model.Although the data support the model at the pooled, national,and individual difference levels, the strength of relations differed for the idiocentric and allocentric groups, as hypothesized.These hypotheses were supported at the individual, but not at the country, level. This is not surprising because a high degree of variance is found within most countries at the individual level, even though there is a tendency toward allocentrism in collectivist cultures and idiocentrism in individualist cultures. In addition, the use of country as a proxy for culture does little to remove potential confounds to the theory.Referent expectations were found to have greater influence on purchase intentions for allocentrics than for idiocentrics,and attitude toward the purchase had a greater influence on purchase intentions for idiocentrics than allocentrics. This cultural difference has implications for marketing efforts, such as those directed at attitude change. These efforts may be less convincing for allocentrics than idiocentrics, especially when directed at personal benefits. In addition, referent past experience was found to have a greater influence on referent expectations for allocentrics than for idiocentrics. This cultural difference has implications for marketing efforts, such as the introduction of new products, where a first mover advantage may be stronger for allocentrics. For example, in collectivist cultures, such as Japan, people continue to purchase well-known products, even though lower priced products of equal quality exist. This may be interpreted by idiocentrics as a behavior designed to increase personal status. For allocentrics,however, this behavior may be due to a stronger in-group influence.Purchasing products that are well known to the in-group may help to decrease uncertainty about in-group approval of the purchase. Lastly, the consideration of resources also appears to have a greater influence for allocentrics than for idiocentrics. This may be due to an increased sharing of resources and consideration of the in-group. For instance, money spent by an individual to fulfill his or her own personal goals leaves less money to fulfill the needs of the in-group. This cultural difference has implications for marketing efforts, where a focus on group benefits, instead of individual benefits, may be more productive for allocentrics.More generally, cultural dimensions, such as individualism-collectivism, have almost exclusively been examined in social settings. Because allocentric behavior is more likely to be invoked in situations where in-group members are involved,the applicability of these cultural constructs to consumer behavior has not been fully explored, especially insituations when in-group members are not actively involved in the decision. In the past, it was expected that a wide variety of people would be considered in-group members, including the family, friends, coworkers, and even salespeople. More recently, research has suggested that the family is likely to be an in-group in most situations, but that close friends and coworkers are likely to be in-group members in far fewer settings,especially in collectivist societies (e.g., Rhee et al.,1996). Research needs to be conducted to explore the boundary conditions for the influence of cultural dimensions, such as individualism and collectivism, on consumer behavior.This may include the investigation of alternative product categories.For instance, it would be interesting to compare products that are likely to elicit stronger allocentric tendencies,such as high involvement, joint-use products, with those that are likely to elicit stronger idiocentric tendencies, such as low-involvement, sole-use products (Han & Shavitt, 1994).Thls line of research is especially important because only a small number of marketing studies have reported significant cultural effects on consumer behavior, when compared to management and psychology.