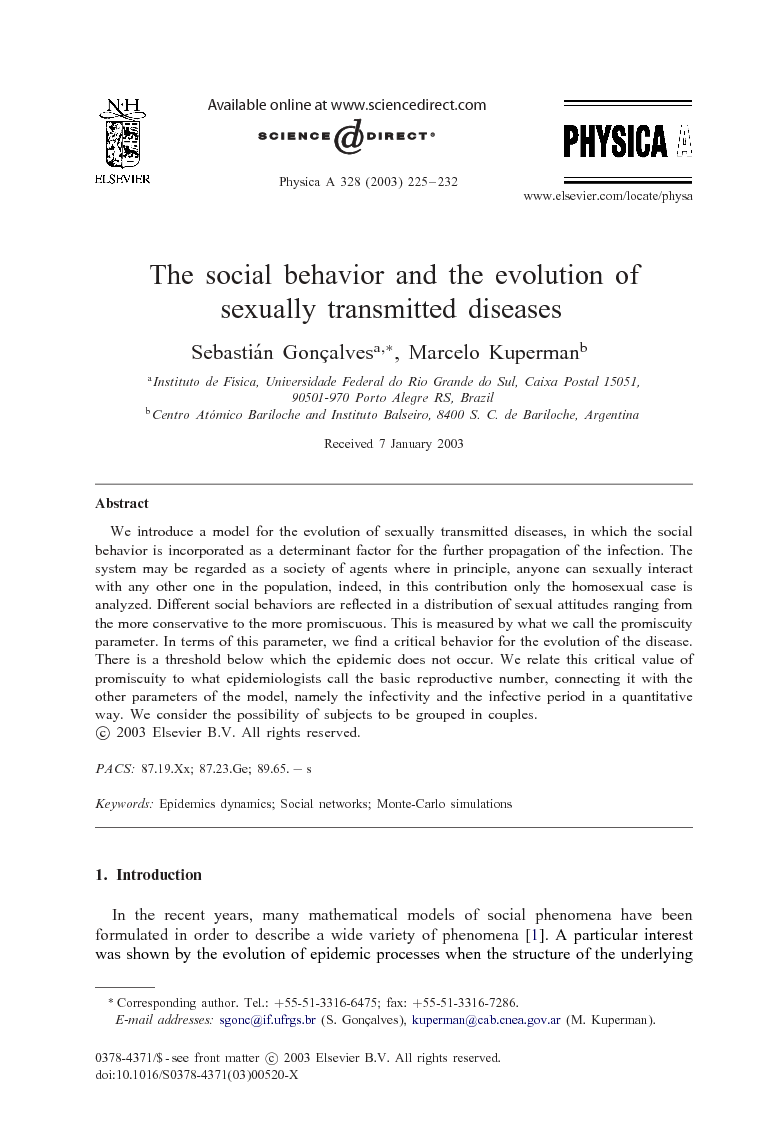 We introduce a model for the evolution of sexually transmitted diseases, in which the social behavior is incorporated as a determinant factor for the further propagation of the infection. The system may be regarded as a society of agents where in principle, anyone can sexually interact with any other one in the population, indeed, in this contribution only the homosexual case is analyzed. Different social behaviors are reflected in a distribution of sexual attitudes ranging from the more conservative to the more promiscuous. This is measured by what we call the promiscuity parameter. In terms of this parameter, we find a critical behavior for the evolution of the disease. There is a threshold below which the epidemic does not occur. We relate this critical value of promiscuity to what epidemiologists call the basic reproductive number, connecting it with the other parameters of the model, namely the infectivity and the infective period in a quantitative way. We consider the possibility of subjects to be grouped in couples.

In the recent years, many mathematical models of social phenomena have been formulated in order to describe a wide variety of phenomena [1]. A particular interest was shown by the evolution of epidemic processes when the structure of the underlying society is taken into account [2], [3], [4] and [5]. In many of these models the existence of a threshold value that determines the further evolution of a nucleus of infection was verified [6] and [7]. On the contrary, it is possible to find other situations where the absence of threshold was shown [6]. Nevertheless, the interesting feature in all of these models is that they incorporate a social aspect not taken into account in previous epidemiological analysis. In the present work, we analyze a particular family of diseases, those sexually transmitted such as AIDS, Hepatitis B, Syphilis, etc. We will focus on a particular aspect of the society very related to the propagation of these diseases: the sexual behavior. We will consider a society composed by sexually active individuals and with different behavioral patterns ranging from the most conservative or stable one, those who only have sexual intercourse with their stable and unique mate, to the most promiscuous who are continuously willing to change their sexual partner. The dynamic of the disease will be associated to the SIR case, where, at a given time, each individual in the population can be in one of the following three stages: susceptible (S), infective (I), and refractory or removed (R). A susceptible individual can become infective through contagion by an infective individual. Once an element has been infective, it enters a cycle that, after a fixed infection time, ends when the element reaches the refractory (or removed in case of death, as in the present model) state. At this stage the individual cannot be infected again or infect the others, therefore the infection ultimately leads to definitive removal of elements from the susceptible population. This family of models has been used to describe the dynamics of well-known infectious diseases, such as AIDS, rabies, and black death, by means of a mean field approximation [8].

We have presented a model for the spread of sexual transmitted diseases, taking into account the social behavior. In spite of the simplistic way of modeling the social interactions, the model produce an outcome that complements results previously reported in classical SIR models for infectious diseases: a quantitative condition for the epidemic to occur, but with a closer look at the social structure. This threshold, called by epidemiologist, the basic reproductive number, was described in the classical literature [13] and [14]. On the other hand, the present model gives a direct connection between disease and social parameters and the epidemic threshold. Being quantitative this connection could be of great utility to predict epidemics. The relevant parameters are four: two corresponding to epidemiological aspects and related to the disease, the probability of being infected in each sexual encounter β and the average life time of the infectious individual τ, and two related to social aspects: the distribution of sexual contacts of the population pi, and the fraction of people that are not in stable couples. The knowledge of the last three would led us to determine the tolerated values for the infectivity β to slow down and, why not, to stop the HIV infectious for example. At the same time, we have analyzed some effects due to the inclusion of particular features of the structure of the society, such as the density of singles or different profiles for the distribution of the sexual behavior.