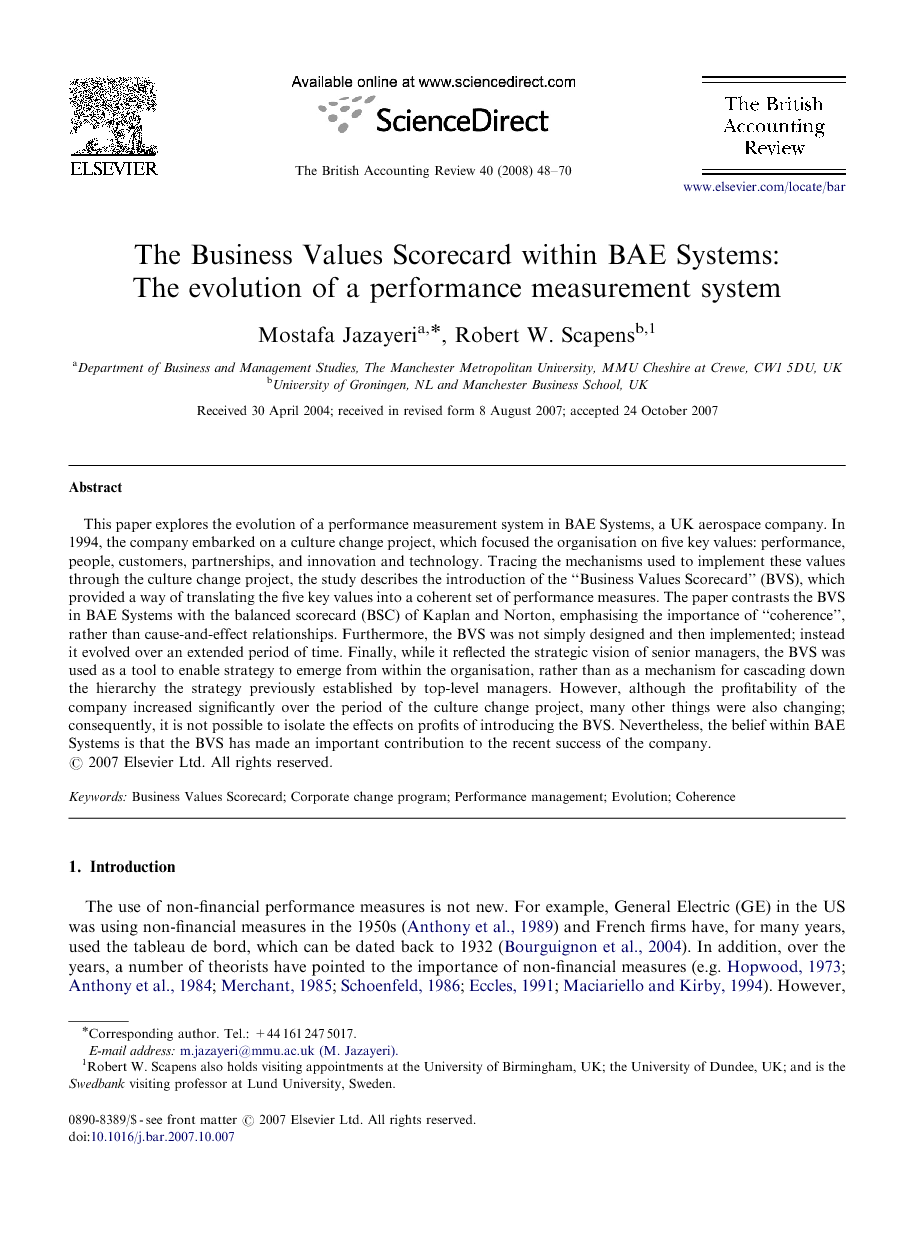 This paper explores the evolution of a performance measurement system in BAE Systems, a UK aerospace company. In 1994, the company embarked on a culture change project, which focused the organisation on five key values: performance, people, customers, partnerships, and innovation and technology. Tracing the mechanisms used to implement these values through the culture change project, the study describes the introduction of the “Business Values Scorecard” (BVS), which provided a way of translating the five key values into a coherent set of performance measures. The paper contrasts the BVS in BAE Systems with the balanced scorecard (BSC) of Kaplan and Norton, emphasising the importance of “coherence”, rather than cause-and-effect relationships. Furthermore, the BVS was not simply designed and then implemented; instead it evolved over an extended period of time. Finally, while it reflected the strategic vision of senior managers, the BVS was used as a tool to enable strategy to emerge from within the organisation, rather than as a mechanism for cascading down the hierarchy the strategy previously established by top-level managers. However, although the profitability of the company increased significantly over the period of the culture change project, many other things were also changing; consequently, it is not possible to isolate the effects on profits of introducing the BVS. Nevertheless, the belief within BAE Systems is that the BVS has made an important contribution to the recent success of the company.

The use of non-financial performance measures is not new. For example, General Electric (GE) in the US was using non-financial measures in the 1950s (Anthony et al., 1989) and French firms have, for many years, used the tableau de bord, which can be dated back to 1932 (Bourguignon et al., 2004). In addition, over the years, a number of theorists have pointed to the importance of non-financial measures (e.g. Hopwood, 1973; Anthony et al., 1984; Merchant, 1985; Schoenfeld, 1986; Eccles, 1991; Maciariello and Kirby, 1994). However, non-financial measurement systems have generally comprised loosely coupled local systems, guided by local needs and with little direct connection to the organisation's strategic objectives, and without any explicit balancing of local and organisational needs (Nørreklit, 2000, p. 66; see also Merchant, 1985). In recent years, considerable research has been directed at constructing systems of non-financial measures linked to strategy (McNair et al., 1990; Beischel and Smith, 1991; Grady, 1991; Euske et al., 1993; Ittner and Larcker, 1998; Vaivio, 1999a, Vaivio, 1999b and Vaivio, 2004; Surysekar, 2003; Ittner et al., 2003a and Ittner et al., 2003b; Malina and Selto, 2004; Chenhall, 2005; Tuomela, 2005). Probably, the most well known of these systems is the balanced scorecard (BSC) of Kaplan and Norton, 1992, Kaplan and Norton, 1993, Kaplan and Norton, 1996a and Kaplan and Norton, 1996b. Kaplan and Norton claim that “the scorecard addresses a deficiency in traditional management accounting systems: their inability to link a company's long-term strategy with its short-term action” (Kaplan and Norton, 1996c, p. 75). Whereas the BSC is intended to provide the means for putting strategy into action, in this paper we will explore an alternative approach in which a scorecard—a so-called “Business Values Scorecard” (BVS)—was used in order to develop strategy. In 1997, BAE Systems introduced its BVS to give managers financial and non-financial information covering the five key values of its culture change project. In this paper, we will discuss the linkages between the BVS in BAE Systems and the company's culture change project. We will also contrast the BVS with Kaplan and Norton's BSC. We will describe how the BVS evolved, rather than being imposed, and examine the way in which the BVS was used to enable strategy to emerge, rather than as a way to implement the strategy set by top-level managers. The paper is organised as follows: the next section will review the literature on non-financial performance measures; then after Section 3 describes our research methods, Section 4 will describe performance measurement systems (PMS) in BAE Systems; Section 5 then discusses issues arising out of our case study and Section 6 provides some conclusions.

It was pointed out earlier that one of the reasons that the BSC is so popular is that it has a wide range of different uses and it can mean many different things to different people. In the case of BAE, the BVS superficially appears similar to the BSC, and indeed some of the managers described it as a “balanced scorecard”. However, there are some important differences between the BVS and Kaplan and Norton's notion of the BSC. Rather than a means of implementing strategy set by top-level managers (as suggested by Kaplan and Norton), the BVS was introduced to reinforce a cultural change project. As such, it facilitated strategic development and enabled strategy to emerge from within the organisation, rather than being imposed from the top. In this paper we have sought to locate the BVS within the context of the cultural change project, which was taking place within BAE in the mid-1990s, and we have shown how the BVS was used to reinforce the five key values of that project: namely, performance, partnership, customer, people, and innovation and technology. In particular, we have shown that the BVS was not simply designed and implemented as a complete system, but it evolved over an extended period of time. Although there was some resistance to the cultural change project, steps were taken to ensure that the business units were fully involved and, consequently, managers throughout BAE have generally responded quite positively to the BVS. Studies which discuss the introduction of new accounting (and performance measurement) systems usually view those systems as the object of change. However, in this study the BVS was both a mechanism of change, as well as an object of change. The introduction of the BVS could be considered an implementation of a new PMS—i.e., an object of change. But in BAE Systems, the BVS was introduced to facilitate cultural change; as such, it was also a mechanism of change. As part of the cultural change project, the BVS provided a focus on the five “key values” and a process through which strategy could emerge. In this process, managers across the organisation gained a deeper understanding of the performance measures that were included in the BVS. This emphasised the importance of coherence both within the five perspectives and also across those perspectives. This contrasts with the emphasis on cause-and-effect relationships in Kaplan and Norton's approach to the BSC. However, they do recognise the importance of strategic learning, but for them this means testing hypotheses about cause-and-effect relationships. But in the BAE case we saw the need for managers to gain deeper understandings of how all the perspectives, as well as the individual measures within those perspectives, fit together as a whole—rather than focusing only on the individual elements and their cause-and-effect relationships. Furthermore, the case study illustrated how the BVS evolved over time as deeper understandings of the interconnections between the different measures within each of the perspectives were gained. Our evolutionary approach was informed by the framework of Waggoner et al. (1999). However, it was found that the distinctions between their four categories, although useful for theoretical discussions, were too arbitrary to be used to understand the complexity of the evolutionary processes in our case analysis. We found it easier, and more appropriate, to focus first on the antecedents of the change, in terms of the interactions between the internal and external context in which the cultural change project, and the BVS, was set. Then, in order to explore the process and transformation issues, we studied the adaptation and routinisation of the BVS, as managers used the five perspectives on the scorecard to develop strategies to implement the five key values, and to better understand the measures used within each perspective. We saw how, over the time, the BVS evolved to become a central feature of the management control system within BAE Systems, linking budgetary control and organisational practices with strategic intent. To summarise, there are similarities between the BVS and Kaplan and Norton's BSC, but there are also important differences. In particular, the BAE Systems case illustrates the importance of the concept of coherence. Although this concept has been discussed by some writers (see, for instance, Bourguignon et al., 2003; Bourguignon and Jenkins, 2004; Nørreklit, 2000; Nørreklit and Mitchell, 2007), far less attention has been given to it in the literature, than has been given to the notion of cause-and-effect emphasised by Kaplan and Norton. More research is needed to further explore the concept of coherence, and to examine the extent to which it could be helpful in understanding the evolution of PMS and, in particular, the use of non-financial measures. In the case of BAE Systems that we discussed in this paper, the new PMS, and more specifically the BVS, was introduced in the context of a cultural change project. The question remains whether the concept of coherence will be equally important in developing non-financial performance measures in other contexts, and this question awaits further research.