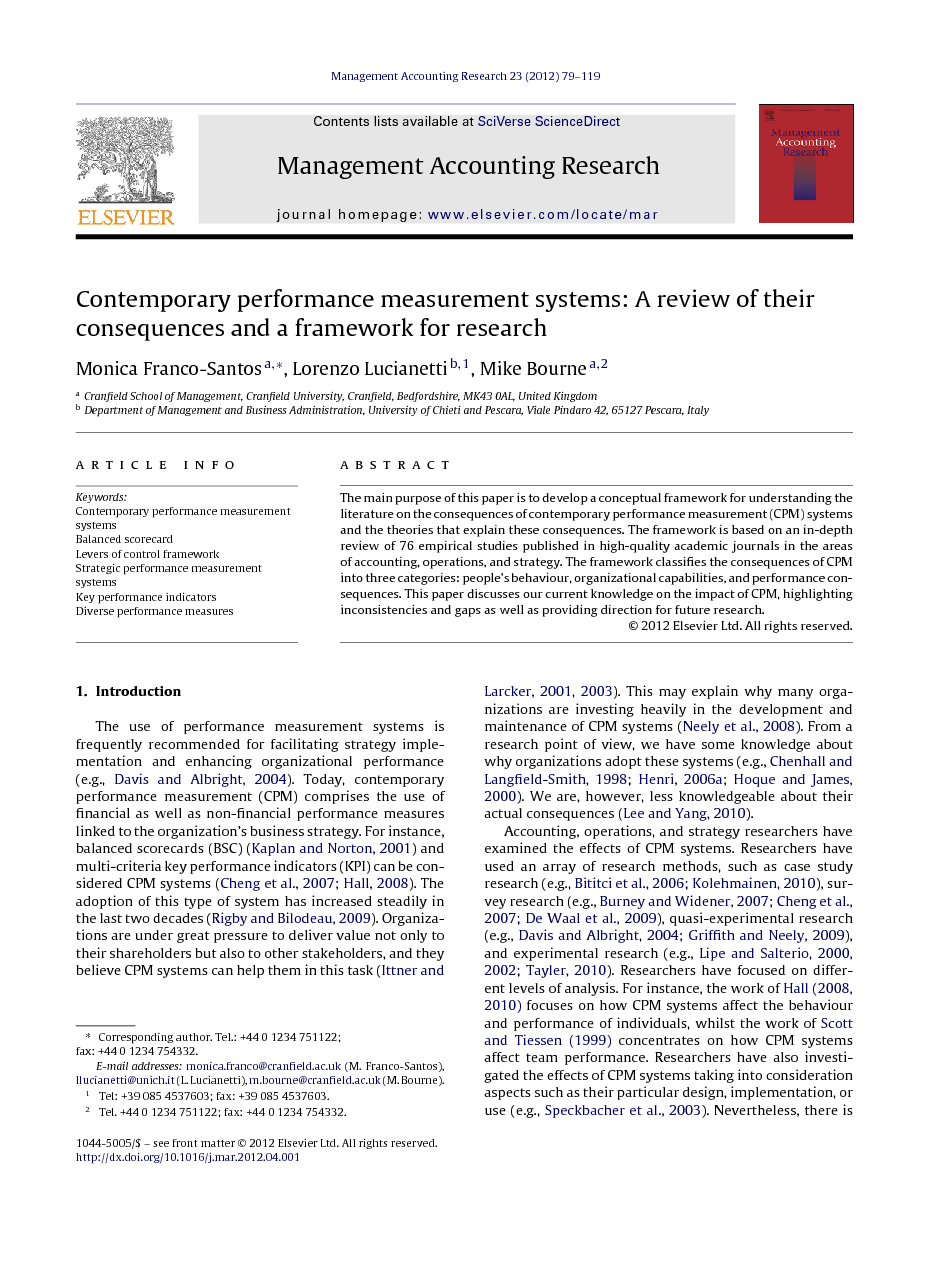 The main purpose of this paper is to develop a conceptual framework for understanding the literature on the consequences of contemporary performance measurement (CPM) systems and the theories that explain these consequences. The framework is based on an in-depth review of 76 empirical studies published in high-quality academic journals in the areas of accounting, operations, and strategy. The framework classifies the consequences of CPM into three categories: people's behaviour, organizational capabilities, and performance consequences. This paper discusses our current knowledge on the impact of CPM, highlighting inconsistencies and gaps as well as providing direction for future research.

The use of performance measurement systems is frequently recommended for facilitating strategy implementation and enhancing organizational performance (e.g., Davis and Albright, 2004). Today, contemporary performance measurement (CPM) comprises the use of financial as well as non-financial performance measures linked to the organization's business strategy. For instance, balanced scorecards (BSC) (Kaplan and Norton, 2001) and multi-criteria key performance indicators (KPI) can be considered CPM systems (Cheng et al., 2007 and Hall, 2008). The adoption of this type of system has increased steadily in the last two decades (Rigby and Bilodeau, 2009). Organizations are under great pressure to deliver value not only to their shareholders but also to other stakeholders, and they believe CPM systems can help them in this task (Ittner and Larcker, 2001 and Ittner and Larcker, 2003). This may explain why many organizations are investing heavily in the development and maintenance of CPM systems (Neely et al., 2008). From a research point of view, we have some knowledge about why organizations adopt these systems (e.g., Chenhall and Langfield-Smith, 1998, Henri, 2006a and Hoque and James, 2000). We are, however, less knowledgeable about their actual consequences (Lee and Yang, 2010). Accounting, operations, and strategy researchers have examined the effects of CPM systems. Researchers have used an array of research methods, such as case study research (e.g., Bititci et al., 2006 and Kolehmainen, 2010), survey research (e.g., Burney and Widener, 2007, Cheng et al., 2007 and De Waal et al., 2009), quasi-experimental research (e.g., Davis and Albright, 2004 and Griffith and Neely, 2009), and experimental research (e.g., Lipe and Salterio, 2000, Lipe and Salterio, 2002 and Tayler, 2010). Researchers have focused on different levels of analysis. For instance, the work of Hall, 2008 and Hall, 2010 focuses on how CPM systems affect the behaviour and performance of individuals, whilst the work of Scott and Tiessen (1999) concentrates on how CPM systems affect team performance. Researchers have also investigated the effects of CPM systems taking into consideration aspects such as their particular design, implementation, or use (e.g., Speckbacher et al., 2003). Nevertheless, there is still a lack of consensus on the actual consequences of CPM. Furthermore, to our knowledge, no integration study has been conducted to better understand the diverse effects of CPM systems as well as how these effects occur. Integrating our research knowledge in this area is important to progress the CPM field and to support evidence-based management initiatives (Rousseau, 2006). The aim of this paper is to integrate our knowledge on the consequences of CPM systems by conducting a review of the existing empirical evidence on this topic. Specifically, we pursue two objectives. Our first objective is to identify and categorize the consequences of CPM systems studied in the literature, providing a guiding framework that integrates them. We classify the consequences of CPM into three categories: people's behaviour, organizational capabilities, and performance consequences. This comprehensive yet parsimonious categorization allows us to accommodate the numerous variables that may be affected by CPM systems, thereby facilitating the understanding of this complex phenomenon. Our category encompassing people's behaviour refers to consequences related to the actions or reactions of employees (e.g., motivation, participation) and their underlying cognitive mechanisms (e.g., perceptions). Our organizational capabilities category refers to consequences associated with specific processes, activities, or competences that enable the organization to perform and gain competitive advantages (e.g., strategic alignment, organizational learning). Finally, our performance category comprises the different effects that CPM systems can have on financial and non-financial results at all levels of the organization (e.g., firm performance, managerial performance, and team performance). Our second objective is to explain the different mechanisms by which CPM is presumed to affect people's behaviour, organizational capabilities, and performance. In the literature, several theories have been proposed to explain the consequences of CPM. Theories such as agency theory and goal-setting theory present strong arguments as to how the use of CPM affects behaviour and motivation. However, there are other less widely used theories that have also been adopted in the literature and deserve some attention. For instance, Schiff and Hoffman (1996) use attribution theory to explain how executives use multi-criteria performance measures and how these measures affect their decision-making processes. Another example is the work of Malmi (2001), who adopts neo-institutionalism theory to explain why companies adopt CPM systems and the consequences of these decisions. Understanding the underlying mechanisms that generate the different consequences of CPM is critical for determining how to maximize the effectiveness of these systems. The remainder of this paper is structured as follows. In Section 2, we provide a definition of CPM and a full description of the three categories of CPM effects. In Section 3, we discuss our method of literature review, explaining in detail the process adopted and our research selection criteria. In Section 4, we present our framework for research, comprising the findings of our literature review. In Section 5, we discuss the findings of our review, along with their implications for practice and suggestions for further research. We also outline here the limitations of our study. Finally, in Section 6, we draw our research conclusions.