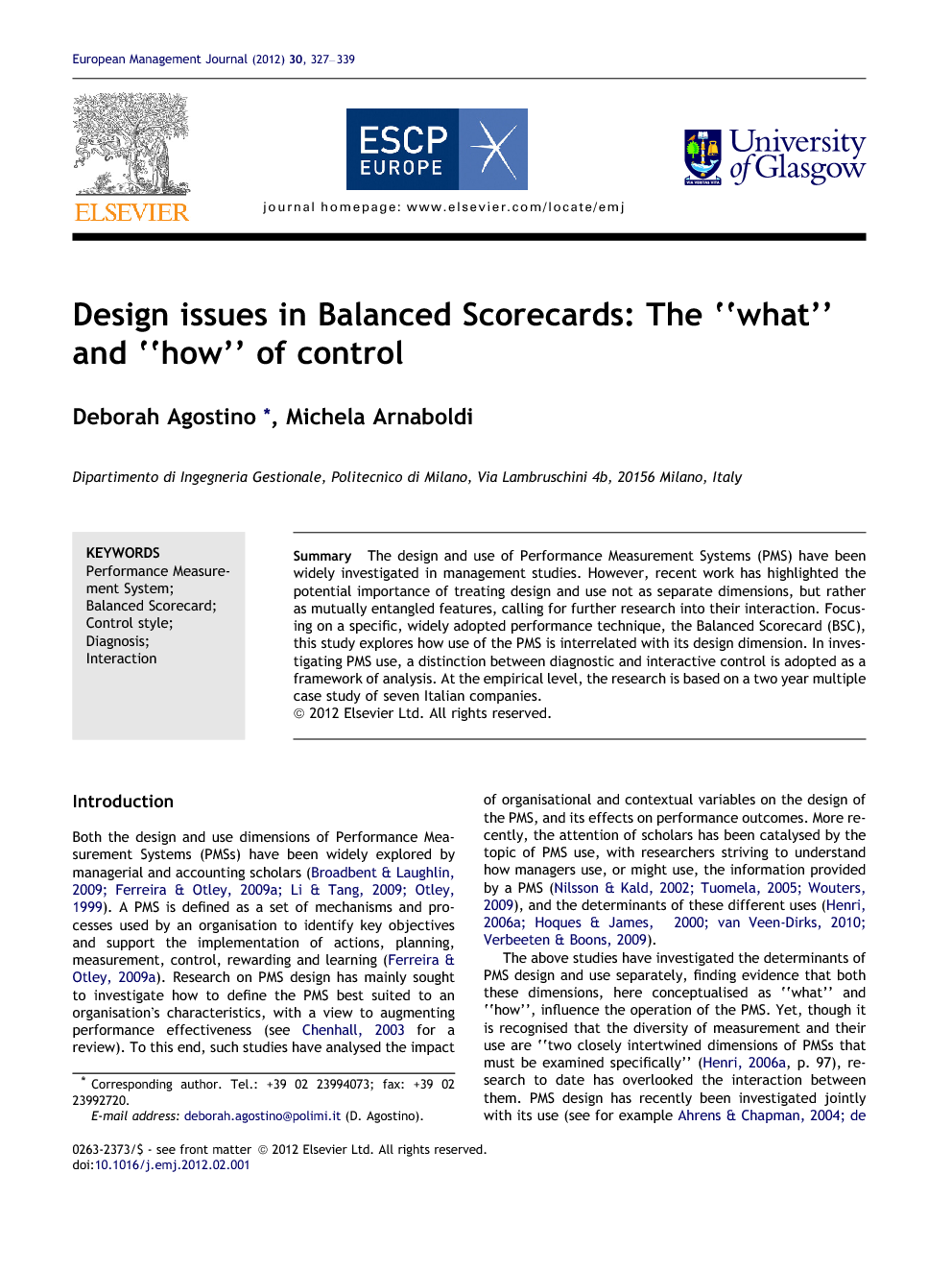 The design and use of Performance Measurement Systems (PMS) have been widely investigated in management studies. However, recent work has highlighted the potential importance of treating design and use not as separate dimensions, but rather as mutually entangled features, calling for further research into their interaction. Focusing on a specific, widely adopted performance technique, the Balanced Scorecard (BSC), this study explores how use of the PMS is interrelated with its design dimension. In investigating PMS use, a distinction between diagnostic and interactive control is adopted as a framework of analysis. At the empirical level, the research is based on a two year multiple case study of seven Italian companies.

Both the design and use dimensions of Performance Measurement Systems (PMSs) have been widely explored by managerial and accounting scholars (Broadbent and Laughlin, 2009, Ferreira and Otley, 2009a, Li and Tang, 2009 and Otley, 1999). A PMS is defined as a set of mechanisms and processes used by an organisation to identify key objectives and support the implementation of actions, planning, measurement, control, rewarding and learning (Ferreira & Otley, 2009a). Research on PMS design has mainly sought to investigate how to define the PMS best suited to an organisation’s characteristics, with a view to augmenting performance effectiveness (see Chenhall, 2003 for a review). To this end, such studies have analysed the impact of organisational and contextual variables on the design of the PMS, and its effects on performance outcomes. More recently, the attention of scholars has been catalysed by the topic of PMS use, with researchers striving to understand how managers use, or might use, the information provided by a PMS (Nilsson and Kald, 2002, Tuomela, 2005 and Wouters, 2009), and the determinants of these different uses (Henri, 2006a, Hoques and James, 2000, van Veen-Dirks, 2010 and Verbeeten and Boons, 2009). The above studies have investigated the determinants of PMS design and use separately, finding evidence that both these dimensions, here conceptualised as “what” and “how”, influence the operation of the PMS. Yet, though it is recognised that the diversity of measurement and their use are “two closely intertwined dimensions of PMSs that must be examined specifically” (Henri, 2006a, p. 97), research to date has overlooked the interaction between them. PMS design has recently been investigated jointly with its use (see for example de Haas and Kleingeld, 1999, Ahrens and Chapman, 2004, Henri, 2006a and Ferreira and Otley, 2009b). These contributions indirectly tackled the issue of interaction between design and use, but with mixed findings. For example, de Haas and Kleingeld (1999) propose a normative framework for designing a PMS that enables a specific type of use, namely interactive. Using a longitudinal case study in a restaurant chain, Ahrens and Chapman (2004) show how specific design principles foster an enabling PMS use, allowing managers to simultaneously pursue efficiency and flexibility. These studies suggest that the “design of organisational controls play a crucial role in fitting organisational behaviour to organisational goals” (de Haas & Kleingeld, 1999, p. 234), thereby treating design as the predominant factor shaping the appropriateness of a PMS. In contrast, other case studies acknowledge that “the use of the Management Control System (MCS) has the ability to counteract issues with MCS design” (Ferreira & Otley, 2009b, p. 35). For instance, Henri (2006a) found that the way in which a PMS is used entrains differences in performance measures. More specifically, a monitoring use is associated with a predominance of financial measures, while a strategic use is mainly characterised by a predominance of non-financial measures. Ferreira and Otley (2009b) instead emphasise the prominent role of use, highlighting how intensity of PMS use can counterbalance misfits in PMS design. These mixed findings might be explained by the fact that the studies in question simultaneously investigated PMS design and use, but overlooked their interaction. Building upon “loose” contingency (Chapman, 1997), the present work has the objective of theoretically and empirically assessing how the aspects of PMS design and use are interrelated, through a focus on a well-known performance measurement technique, the BSC (Kaplan & Norton, 1992). Use is specifically investigated by adopting Simons’ (1995) distinction between diagnostic and interactive control, while the design dimension is analysed with reference to four attributes emerging from the previous BSC literature (e.g. Malmi, 2001 and Speckbacher et al., 2003). The balance between financial and non-financial performance measures, the cascading of the BSC, the determination of target levels and the reward system associated with BSC measures are here related to how the PMS is used, whether diagnostically or interactively. The choice of a “loose” contingency approach was driven by the need for more accurate results than those obtainable from “hard” contingency testing (Chapman, 1997), thanks to a closer contact between the organisation and the researcher (Otley, 1980). Accordingly, the research question investigated in this study is the following: how is the type of use, characterised as diagnostic or interactive, related to the BSC design? We empirically address this question in seven non-financial firms that had been using a BSC for at least three years. Through an in-depth investigation, we identify two distinct types of Balanced Scorecards, which we call Diag-BSC and Int-BSC, associated with different styles of use (diagnostic or interactive), and different design features. The results of our research are discussed in the remainder of this paper. First, we present previous studies on the design and use of PMSs; we then go onto operationalise the concepts of design and use specifically for the BSC, with the purpose of explaining how we detected these dimensions in the field. Next, the research methodology is explained, followed by a discussion of the results of the case studies. Finally we draw some conclusions.