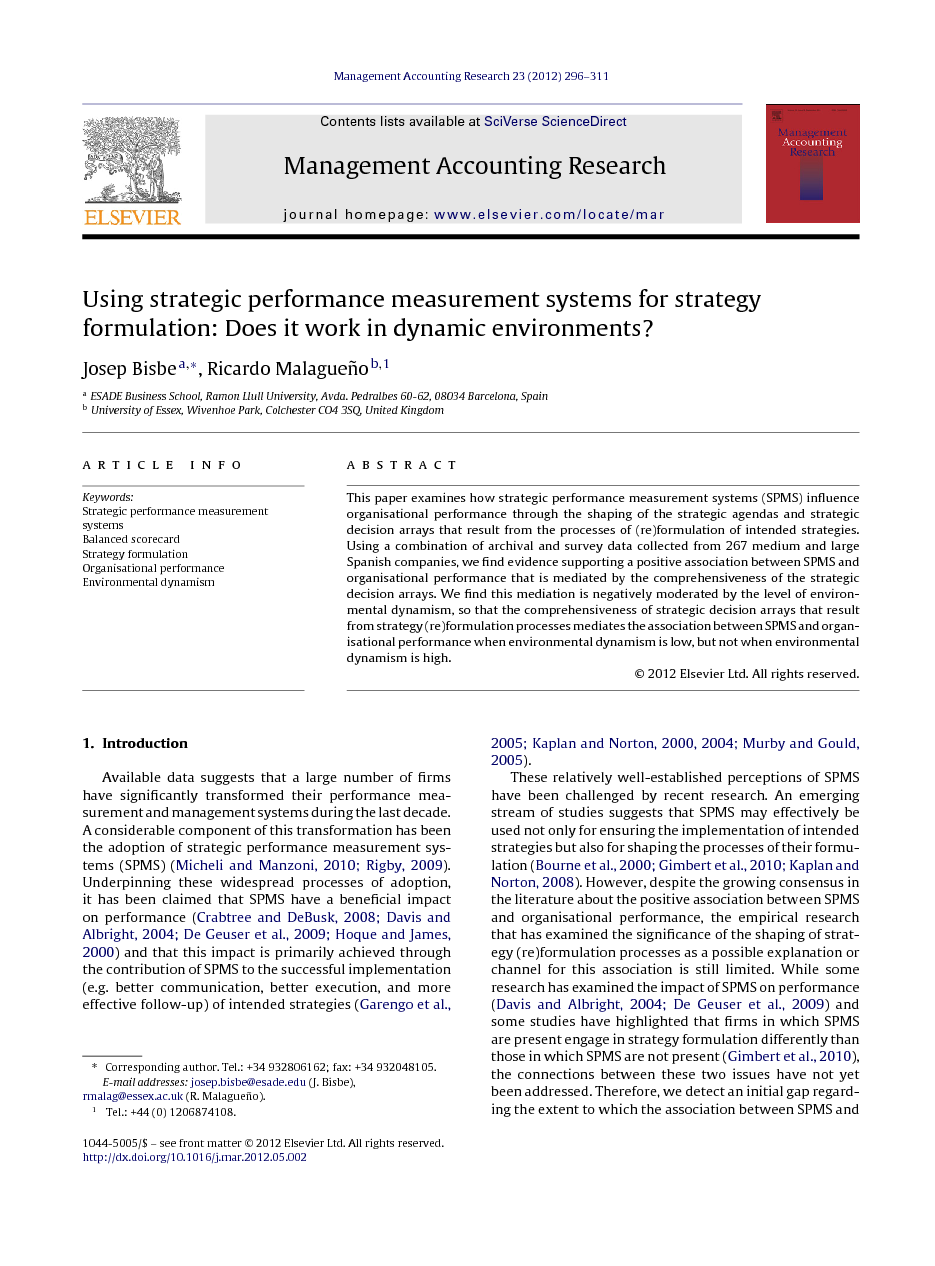 This paper examines how strategic performance measurement systems (SPMS) influence organisational performance through the shaping of the strategic agendas and strategic decision arrays that result from the processes of (re)formulation of intended strategies. Using a combination of archival and survey data collected from 267 medium and large Spanish companies, we find evidence supporting a positive association between SPMS and organisational performance that is mediated by the comprehensiveness of the strategic decision arrays. We find this mediation is negatively moderated by the level of environmental dynamism, so that the comprehensiveness of strategic decision arrays that result from strategy (re)formulation processes mediates the association between SPMS and organisational performance when environmental dynamism is low, but not when environmental dynamism is high.

This study contributes to a better understanding of the extent to which SPMS influence organisational performance through their contribution to the processes of (re)formulating intended strategies. It provides both theoretical developments and large-scale empirical evidence that, despite being primarily conceived to facilitate strategy implementation, SPMS influence performance not only through such implementation as generally discussed in previous empirical research, but also through the shaping of strategic agendas and the strategic decision arrays that result from the (re)formulation of intended strategies. This has practical implications since managers of organisations that already have SPMS in place and are aware of the role of SPMS in the improved implementation of strategies should also be aware of and exploit the positive implications of SPMS for strategy (re)formulation purposes on performance. In turn, managers of organisations that do not have SPMS in place should include the potential implications of SPMS on performance acting through strategy (re)formulation when pondering the advantages and drawbacks of an eventual adoption of SPMS. Furthermore, this paper also investigates whether the strength of the influence of SPMS on performance acting through strategy (re)formulation depends on the level of environmental dynamism. We have concluded that environmental dynamism is a critical factor that significantly influences the strength of the mediated effect of SPMS on performance, and that that this positive mediated effect is salient in stable environments—but diminishes as environmental dynamism grows. This moderated mediation pattern also has practical implications for managers since it highlights that companies in stable environments are more likely to capitalise the beneficial effects of SPMS operating through strategy (re)formulation; whereas companies in very dynamic environments will find it harder to exploit such effects. Some limitations must be noted so that they can be addressed in subsequent research. Firstly, the sample of our study was selected from medium and large industrial and service firms in a given geographical area. Generalising the results to organisations in other areas should be done with caution. Secondly, future studies in this area should also develop more refined measurement instruments. We opted for using a combination of survey and publicly available archival data in order to avoid single source and common method biases. However, potential concerns regarding some of the self-reported measures still exist, in particular regarding the accuracy of recall. We encourage future research to further refine such measurement instruments to address these concerns. Finally, since background theory was considerably developed, but little quantitative evidence was available, we opted for a large-sample, cross-sectional study in order to contribute to advancing current knowledge in this area. As happens with any methodology, we acknowledge limitations in our study that are inherent to the selected research design. We used lagged archival measures of performance to at least partially mitigate potential concerns about reversed causality and endogeneity, but we accept that these concerns cannot be completely ruled out and that strict causality cannot be claimed. To better understand the dynamics and qualitative aspects underlying the relationships found in this study, we encourage further longitudinal case studies to extend and complement our findings.