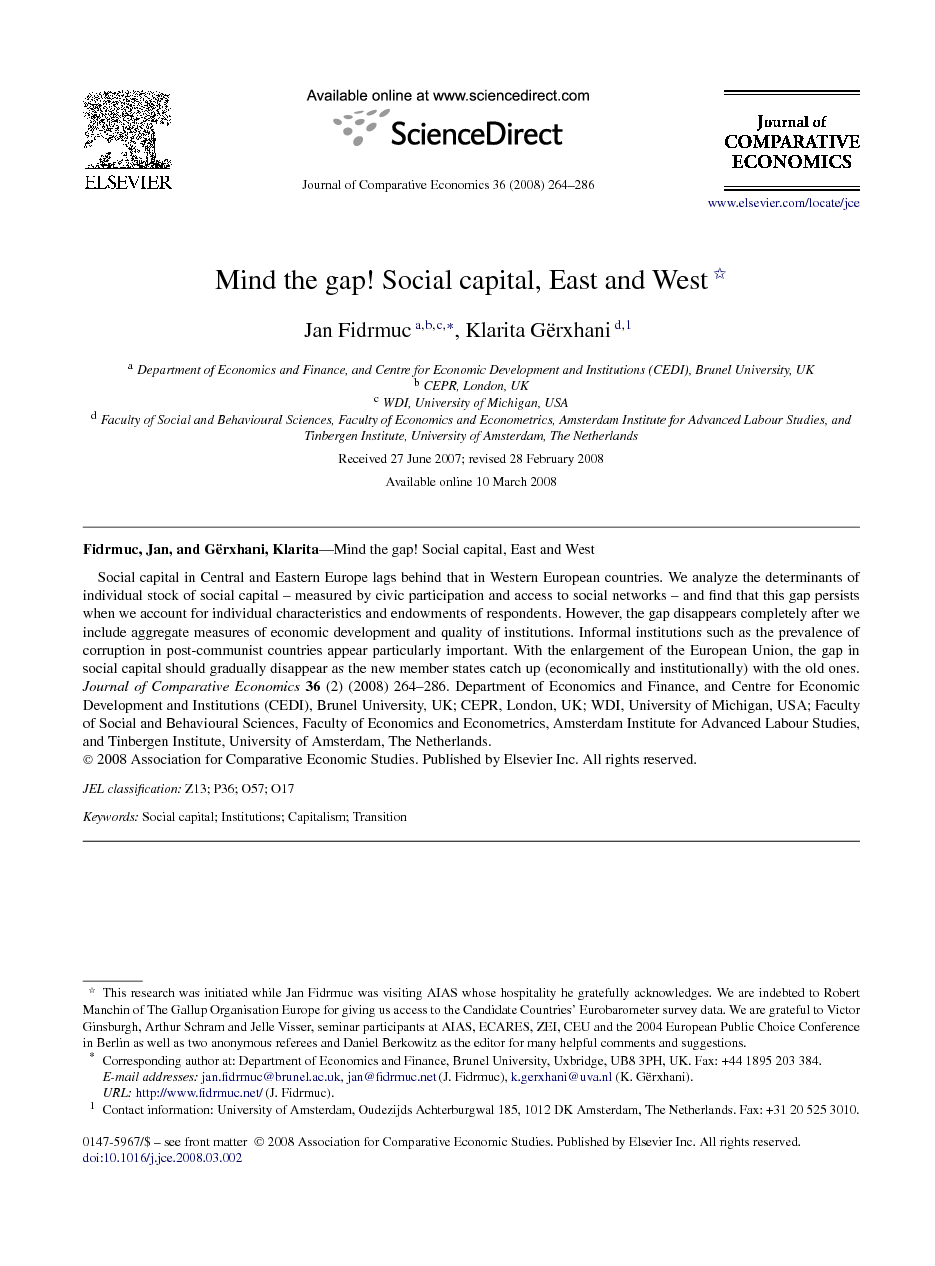 Social capital in Central and Eastern Europe lags behind that in Western European countries. We analyze the determinants of individual stock of social capital – measured by civic participation and access to social networks – and find that this gap persists when we account for individual characteristics and endowments of respondents. However, the gap disappears completely after we include aggregate measures of economic development and quality of institutions. Informal institutions such as the prevalence of corruption in post-communist countries appear particularly important. With the enlargement of the European Union, the gap in social capital should gradually disappear as the new member states catch up (economically and institutionally) with the old ones. Journal of Comparative Economics36 (2) (2008) 264–286.

Using recent Eurobarometer surveys, this paper presents new and previously unavailable comparative data featuring a number of alternative measures of social capital for a sample of 28 European countries, including the old member countries of the European Union, the countries that since 2004 have joined the EU as new members (mainly Central and Eastern European countries) and Turkey. Focusing on civic participation and access to social networks as two key (quantitative and qualitative) measures of social capital, we analyze the determinants of individual stock of social capital, considering individual (socio-economic and demographic characteristics) and aggregate (economic development and quality of institutions) factors alike. Previous literature – Paldam and Svendsen (2000) and Adam et al. (2004) – identified a gap in the average stock of social capital between the developed Western countries and the former communist countries of Central and Eastern Europe. That literature attributes the presence of this gap to the legacy of communism. Our findings confirm this gap both when looking at the raw data and in regression analysis when considering only individual determinants of social capital. We find, however, that the gap between East and West disappears completely once we account for some basic aspects of economic development and quality of institutions in the individual countries. Hence, the fact that the new member states display lower levels of social capital can be attributed to their lower level of economic development and poorer institutions, especially more pervasive corruption, rather than potentially long-lasting historical legacy of communism.30 Although convergence in formal institutions between the old and the new member states has to a large extent been accomplished (largely as a prerequisite of their accession to the EU), there remains a mismatch between these ‘harmonized’ formal institutions and the existing informal institutions in the new member countries (see Pejovich, 2003, for a broader discussion). This lack of correspondence, embodied in the prevalence of corruption and other predatory activities, may be the underlying reason for the gap in social capital. This argument can be reinforced by our finding that the participation in Olsonian groups (formal political groups and parties or unions) is much lower than in Putnamesque groups in the new member countries, reflecting the individuals' lack of trust in formal institutions. In this respect, we agree with previous research that argues that social capital (as measured by voluntary participation in organizations) is not merely dependent on individuals' wealth, education or particular interests but also on the cultural and institutional arrangements defined at the national level (Schofer and Fourcade-Gourinchas, 2001). The enlargement of the European Union is expected to foster institutional development and encourage adoption of growth-enhancing economic policies in the new member countries. This will, in turn, discourage rent-seeking, motivate a rewarding scheme of leadership based on performance, enhance public trust in the state's actions and promote civic spirit. All this should reduce the return to ‘negative’ social capital and encourage the formation of ‘positive’ social capital. Thus, once Central and Eastern European countries catch up with the West in terms of economic development and institutions, they are very likely to close the gap in social capital as well. For this to be possible, however, a gradual harmonization of formal rules and informal norms between the two groups of countries should be of primary importance.