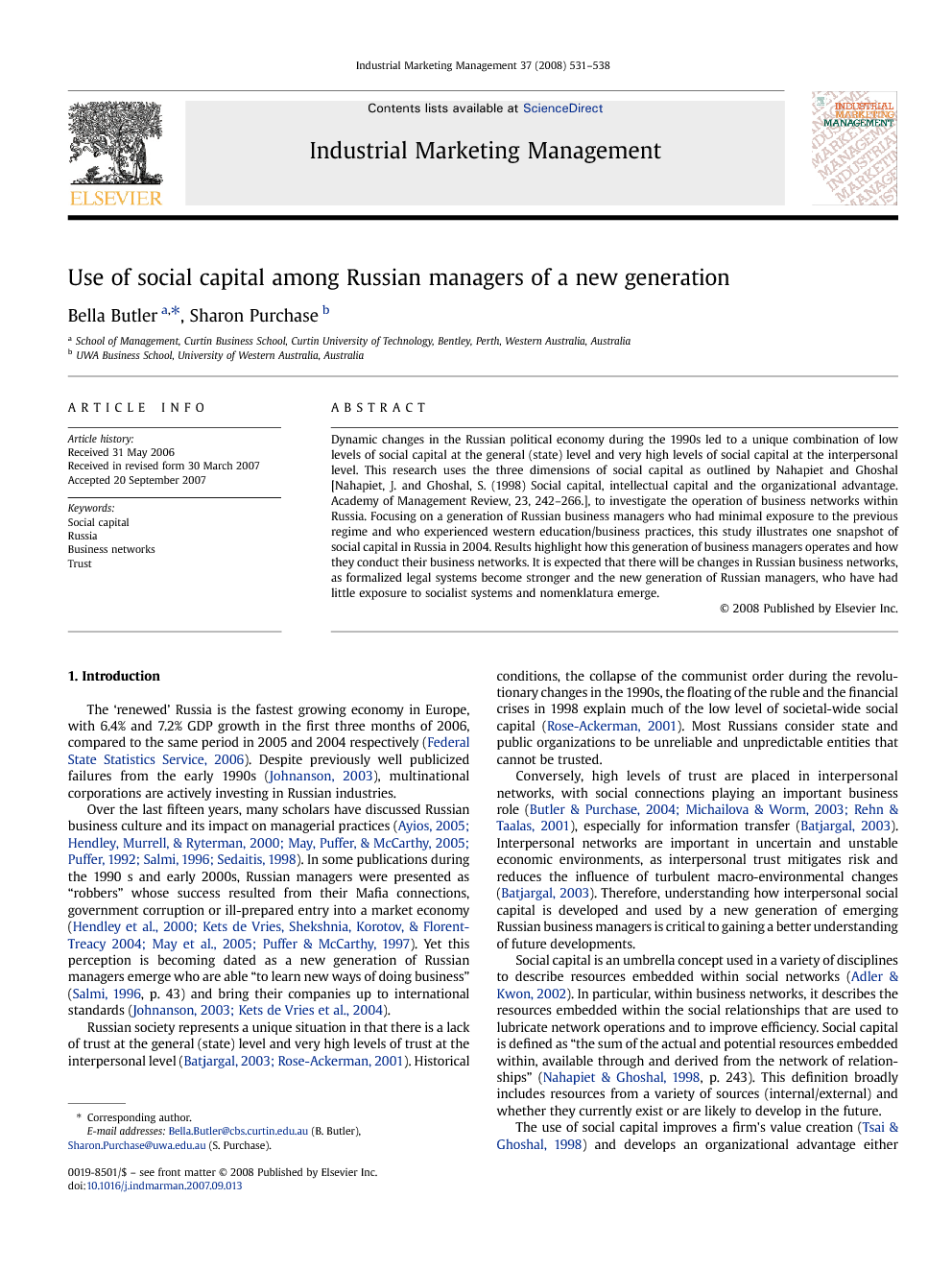 Dynamic changes in the Russian political economy during the 1990s led to a unique combination of low levels of social capital at the general (state) level and very high levels of social capital at the interpersonal level. This research uses the three dimensions of social capital as outlined by Nahapiet and Ghoshal [Nahapiet, J. and Ghoshal, S. (1998) Social capital, intellectual capital and the organizational advantage. Academy of Management Review, 23, 242–266.], to investigate the operation of business networks within Russia. Focusing on a generation of Russian business managers who had minimal exposure to the previous regime and who experienced western education/business practices, this study illustrates one snapshot of social capital in Russia in 2004. Results highlight how this generation of business managers operates and how they conduct their business networks. It is expected that there will be changes in Russian business networks, as formalized legal systems become stronger and the new generation of Russian managers, who have had little exposure to socialist systems and nomenklatura emerge.

The ‘renewed’ Russia is the fastest growing economy in Europe, with 6.4% and 7.2% GDP growth in the first three months of 2006, compared to the same period in 2005 and 2004 respectively (Federal State Statistics Service, 2006). Despite previously well publicized failures from the early 1990s (Johnanson, 2003), multinational corporations are actively investing in Russian industries. Over the last fifteen years, many scholars have discussed Russian business culture and its impact on managerial practices (Ayios, 2005, Hendley et al., 2000, May et al., 2005, Puffer, 1992, Salmi, 1996 and Sedaitis, 1998). In some publications during the 1990 s and early 2000s, Russian managers were presented as “robbers” whose success resulted from their Mafia connections, government corruption or ill-prepared entry into a market economy (Hendley et al., 2000, Kets de Vries et al., 2004, May et al., 2005 and Puffer and McCarthy, 1997). Yet this perception is becoming dated as a new generation of Russian managers emerge who are able “to learn new ways of doing business” (Salmi, 1996, p. 43) and bring their companies up to international standards (Johnanson, 2003 and Kets de Vries et al., 2004). Russian society represents a unique situation in that there is a lack of trust at the general (state) level and very high levels of trust at the interpersonal level (Batjargal, 2003 and Rose-Ackerman, 2001). Historical conditions, the collapse of the communist order during the revolutionary changes in the 1990s, the floating of the ruble and the financial crises in 1998 explain much of the low level of societal-wide social capital (Rose-Ackerman, 2001). Most Russians consider state and public organizations to be unreliable and unpredictable entities that cannot be trusted. Conversely, high levels of trust are placed in interpersonal networks, with social connections playing an important business role (Butler and Purchase, 2004, Michailova and Worm, 2003 and Rehn and Taalas, 2001), especially for information transfer (Batjargal, 2003). Interpersonal networks are important in uncertain and unstable economic environments, as interpersonal trust mitigates risk and reduces the influence of turbulent macro-environmental changes (Batjargal, 2003). Therefore, understanding how interpersonal social capital is developed and used by a new generation of emerging Russian business managers is critical to gaining a better understanding of future developments. Social capital is an umbrella concept used in a variety of disciplines to describe resources embedded within social networks (Adler & Kwon, 2002). In particular, within business networks, it describes the resources embedded within the social relationships that are used to lubricate network operations and to improve efficiency. Social capital is defined as “the sum of the actual and potential resources embedded within, available through and derived from the network of relationships” (Nahapiet & Ghoshal, 1998, p. 243). This definition broadly includes resources from a variety of sources (internal/external) and whether they currently exist or are likely to develop in the future. The use of social capital improves a firm's value creation (Tsai & Ghoshal, 1998) and develops an organizational advantage either directly or indirectly (Batjargal, 2003 and Nahapiet and Ghoshal, 1998). Although social capital ha s been researched within a variety of different disciplines, there is a lack of research on social capital development within different national and cultural settings (Hitt, Lee, & Yucel, 2002). Social capital has even been touted as the concept which could help to integrate social relations into the discipline of cross-cultural management, emphasizing its importance within different cultural settings. Adler and Kwon (2002) describe social capital as operating within three different relationship types: market relationships, social relationships and hierarchical relationships. These types are not independent and resources drawn from within any relationship type can assist other relationships. For example, using social relationships can assist in obtaining employment; i.e. hierarchical relationships (Lin, 1999). Differentiation between relationship types is blurred within different cultures. In Russia, social relationships (friendships) are linked to market relationships and hierarchical relationships through the concept of blat ( Batjargal, 2003, Butler and Purchase, 2004, Michailova and Worm, 2003 and Rehn and Taalas, 2001). Similarly, within Chinese, Japanese and Korean networks, social capital is important in the use of guanxi, kankei and inmak ( Hitt et al., 2002 and Michailova and Worm, 2003). Within this organic concept of social capital, five dimensions have developed: structural, relational, cognitive, cultural and resource embeddedness (Batjargal, 2003, Bourdieu, 1986, Nahapiet and Ghoshal, 1998 and Tsai and Ghoshal, 1998). Structural, relational and cognitive dimensions make up the fundamental base of this research and will be expanded upon later in this paper. Cultural capital is not included, a s it covers similar aspects to cognitive capital. Resource embeddedness is not included, as it is a combination of both structural (ties to powerful actors) and relational (ability to influence relations) capital. The three dimensions chosen for this paper each describe a different type of resource base and have been commonly used within the literature (Nahapiet and Ghoshal, 1998, Tsai and Ghoshal, 1998 and Yli-Renko et al., 2001). The use of social capital as the theoretical basis for this research is useful for the following reasons: (1) social capital integrates different types of relationships into the one concept allowing for the integration of social, market and hierarchical relationships which is pertinent for Russian business networks; (2) social capital has been used in a variety of academic disciplines and is becoming an important avenue for research; and (3) understanding social capital within different cultural contexts needs to be considered in more detail. Our contribution is the analysis of the development of social capital within Russian business networks. The paper consists of five sections. Firstly, a new generation of Russian managers will be described, followed by the three main dimensions of social capital. The third section outlines the methodology and data analysis undertaken. Finally, the results highlight how Russian managers use social capital. The relationships between the dimensions of social capital and managerial implications conclude the paper.

Table 3, Table 4 and Table 5 highlight the behaviors which Russian managers exhibited when developing social capital and provide suggestions on how managers may achieve high levels of social capital with Russian entrepreneurs. Russians are keen to develop their personal networks, ensuring that they are always well connected to useful or potentially useful contacts. Informal structures are used to cultivate networks therefore managers need to ensure that they have horizontal connections outside of formal hierarchical structures. These connections are maintained not only with top managers but also with other useful individuals at the same hierarchical level. Informal networks need to be stable as the continuity of relationships is important. Continuing relationships may be with a common professional base or with those colleagues with whom the manager has previously worked with. To develop horizontal connections, managers should attend professionally based social activities to maximize the informal nature of these connections. Informal mechanisms are important in a time where flexibility and trust are needed to cope with the transition to a market economy. Network configuration needs to incorporate connections to central actors or network leaders. Moscow is still an important hub for business transactions within Russia and therefore it is important for managers to maintain contacts with companies and branches operating in Moscow. In particular, choosing network leaders for one's industry would place one or one's organization in a good position to be able to learn (i.e. to develop cognitive capital) of network changes. Stability within business networks is important from the perspective of both customers and partners. After the uncertainty of the late 1990s to early 2000s, the respondents highlighted that a long-term orientation was needed for growth in their business. Stable structural configurations are an important component of this and are linked to trust and credibility (relational capital). This changing attitude towards a long-term orientation will require Western businesses to reevaluate how they develop their networks and social capital within Russia. Previous alliances and business dealings conducted within Russia will be carefully scrutinized and Western businesses need to preserve their ‘ethical and good’ reputations, rather than attempt to gain short-term advantages. Learning together and accessing information was a strong theme within the development of cognitive capital. Western business can benefit from this desire to learn through the encouragement of joint training sessions or by incorporating Russian managers in research and planning activities, thus improving the manager's knowledge base, while developing cognitive and relational capital. Salmi (1996, p.43) emphasized that “by getting involved and being an actor in the network, the [Western] company will be in a position to influence network development”. However, it is one thing to have an existing connection, but quite another to be able to access resources within relationships. Trust is particularly important and managers need to take time to develop trust through working constructively within their business networks. Given the negative perceptions of Russian business practices during the 1990s, credibility is emerging as a critical component in developing trust. Credibility is used as an enforcement mechanism (Hendley et al., 2000) and high levels of credibility assist with notions of structural stability (structural capital). Credibility and stability will lead to a long-term orientation in business interactions. Personal relationships are ingrained into the Russian psyche and have been important since Tzarist times, throughout the socialist era and are now evident within the emerging market economy (Kelly, 2000). The dynamic changes in the Russian economy and among the public in the 1990s has seriously impacted upon relationships among individuals and organizations. The current level of macro social capital in Russia is very low, due to the destroyed structures which used to maintain the elements of social capital: trust, social norms and networks. Networks established under the previous system are still considered reliable and stable by most Russians, but are now intertwined with new network structures. Therefore, resources embedded within personal and social networks in Russia have to some extent replaced the nearly non-existent state-level infrastructure. This study highlights how critical developing social capital is to ensure long-term continuous business survival in Russia. This study shows only one snapshot of social capital in Russia in 2004. It is expected that there will be new changes in Russian business networks, as formalized legal systems become stronger and the new generation of Russian managers who had little exposure to the socialist system and nomenklatura emerge. Further research into these issues is required if we are to gain a deeper understanding of Russian business processes.