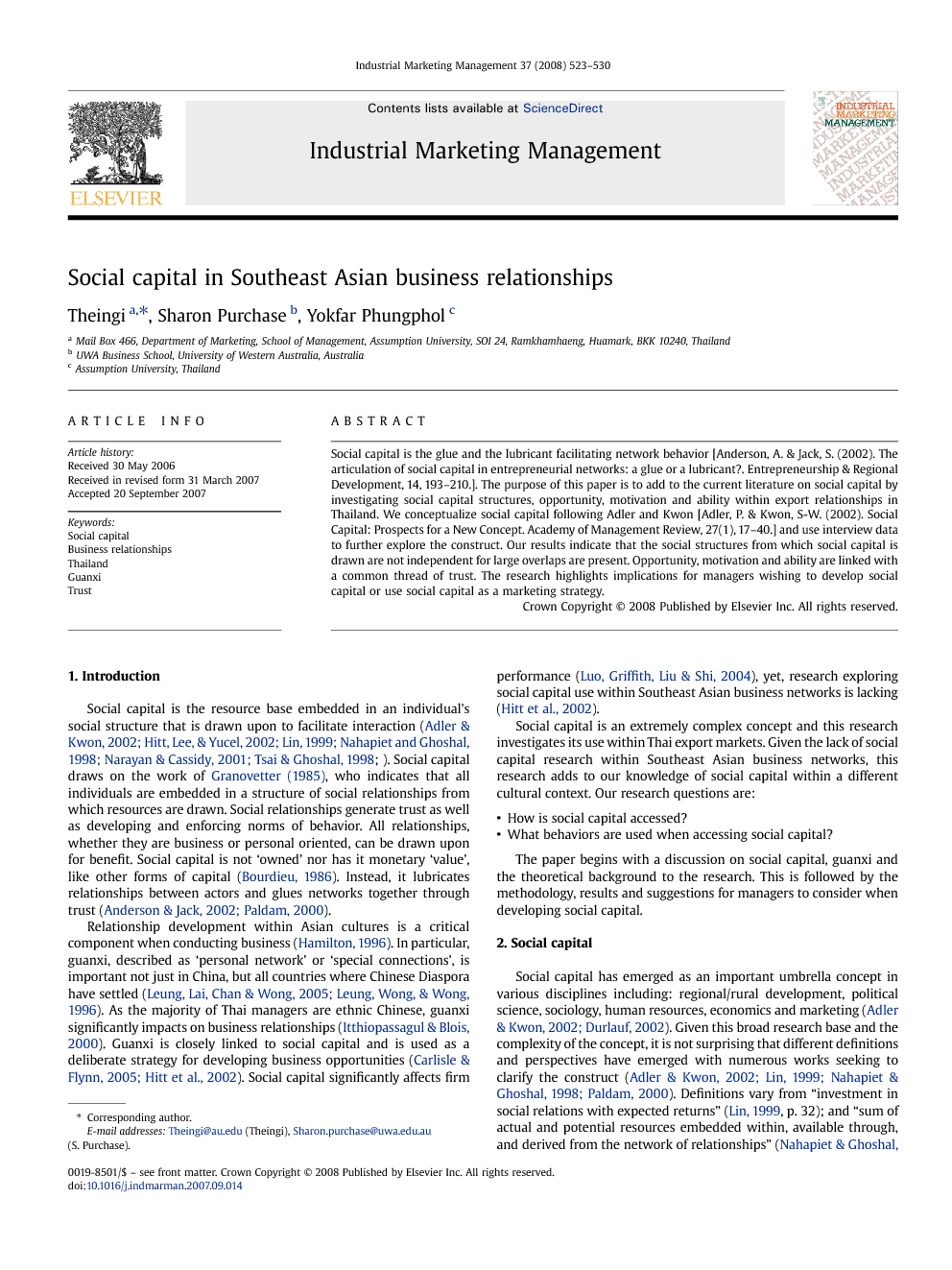 Social capital is the glue and the lubricant facilitating network behavior [Anderson, A. & Jack, S. (2002). The articulation of social capital in entrepreneurial networks: a glue or a lubricant?. Entrepreneurship & Regional Development, 14, 193–210.]. The purpose of this paper is to add to the current literature on social capital by investigating social capital structures, opportunity, motivation and ability within export relationships in Thailand. We conceptualize social capital following Adler and Kwon [Adler, P. & Kwon, S-W. (2002). Social Capital: Prospects for a New Concept. Academy of Management Review, 27(1), 17–40.] and use interview data to further explore the construct. Our results indicate that the social structures from which social capital is drawn are not independent for large overlaps are present. Opportunity, motivation and ability are linked with a common thread of trust. The research highlights implications for managers wishing to develop social capital or use social capital as a marketing strategy.

Social capital is the resource base embedded in an individual's social structure that is drawn upon to facilitate interaction (Adler and Kwon, 2002, Hitt et al., 2002, Lin, 1999, Nahapiet and Ghoshal, 1998, Narayan and Cassidy, 2001 and Tsai and Ghoshal, 1998; ). Social capital draws on the work of Granovetter (1985), who indicates that all individuals are embedded in a structure of social relationships from which resources are drawn. Social relationships generate trust as well as developing and enforcing norms of behavior. All relationships, whether they are business or personal oriented, can be drawn upon for benefit. Social capital is not ‘owned’ nor has it monetary ‘value’, like other forms of capital (Bourdieu, 1986). Instead, it lubricates relationships between actors and glues networks together through trust (Anderson and Jack, 2002 and Paldam, 2000). Relationship development within Asian cultures is a critical component when conducting business (Hamilton, 1996). In particular, guanxi, described as ‘personal network’ or ‘special connections’, is important not just in China, but all countries where Chinese Diaspora have settled (Leung et al., 2005 and Leung et al., 1996). As the majority of Thai managers are ethnic Chinese, guanxi significantly impacts on business relationships (Itthiopassagul & Blois, 2000). Guanxi is closely linked to social capital and is used as a deliberate strategy for developing business opportunities (Carlisle and Flynn, 2005 and Hitt et al., 2002). Social capital significantly affects firm performance (Luo, Griffith, Liu & Shi, 2004), yet, research exploring social capital use within Southeast Asian business networks is lacking (Hitt et al., 2002). Social capital is an extremely complex concept and this research investigates its use within Thai export markets. Given the lack of social capital research within Southeast Asian business networks, this research adds to our knowledge of social capital within a different cultural context. Our research questions are: • How is social capital accessed? • What behaviors are used when accessing social capital? The paper begins with a discussion on social capital, guanxi and the theoretical background to the research. This is followed by the methodology, results and suggestions for managers to consider when developing social capital.

This research was exploratory, finding rich data on social capital within export relationships. It is recommended that future research consider other types of relationships and other countries. Furthermore, the sample of respondents did not cover all industries and future research should consider service industries where social capital is likely to play an important role. Throughout all of this research, trust has been a strong thread running through the results. Trust has influenced social capital through improving possible benefits; mitigating risks; linking opportunity, motivation and ability. Building trust is a deliberate strategy in developing an individual's network structure. Therefore, trust and trusting behaviors are critical aspects of social capital. Given the role of trust within the social capital conceptualization, there are some further questions which need to be considered: Can the different aspects of trust and social capital be considered independently? What is the difference between trust/trusting behaviors and social capital? Further research into considering social capital is required if we are going to begin to understand the role of trust within social capital.