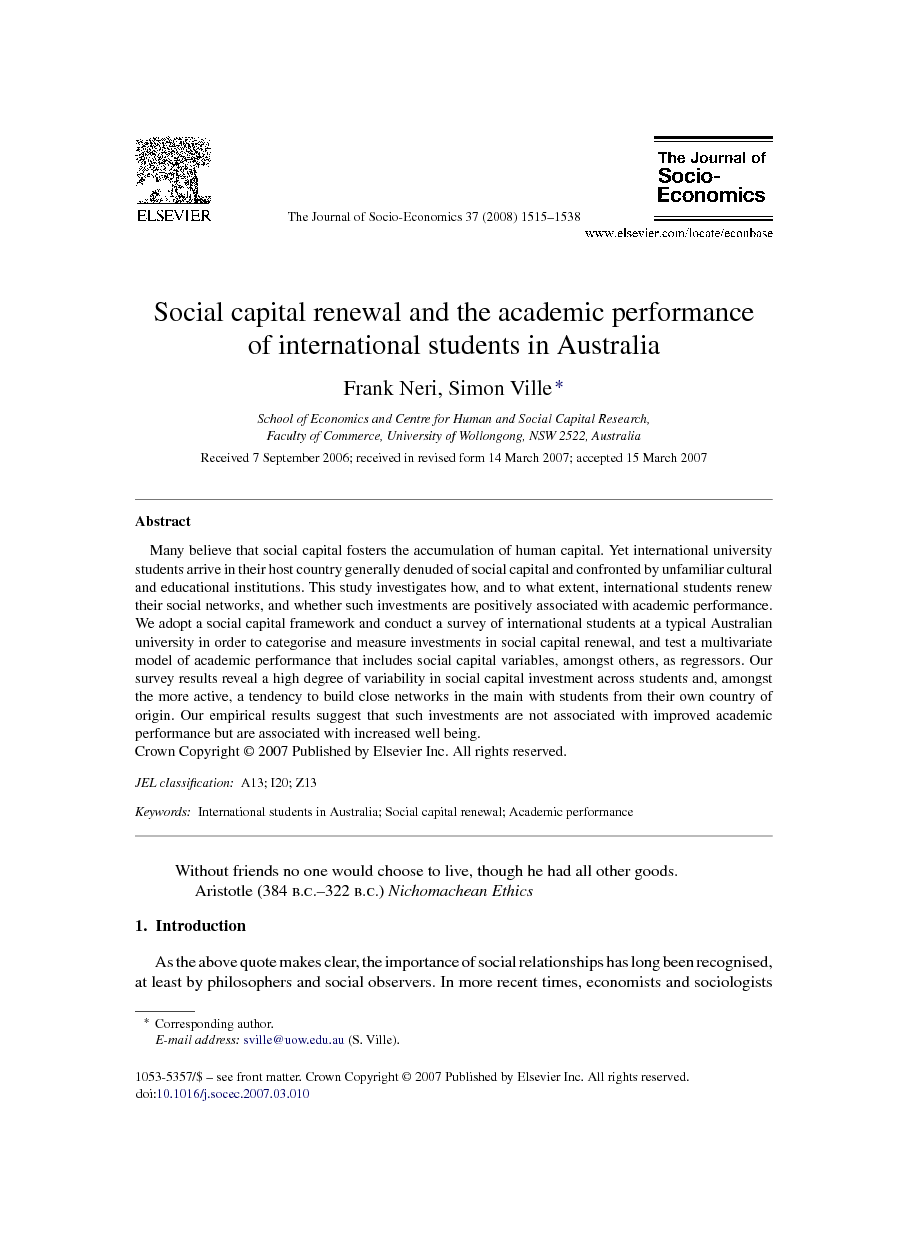 As the above quote makes clear, the importance of social relationships has long been recognised, at least by philosophers and social observers. In more recent times, economists and sociologists have also recognised the importance of social relationships, which is one dimension of what is more commonly referred to as social capital. Related dimensions include trust (both general and particular), volunteering, and organisational and club involvement. Whilst not unanimous, much research suggests that social capital is positively associated with economic growth, international trade, macroeconomic stability, political and civic involvement, crime prevention, health and happiness. Of particular interest to us are suggestions in the literature that social capital impacts positively and significantly on the academic achievement of secondary school students.1 If social relationships are important for academic success then do international students, who leave their home country to study in a foreign educational and cultural setting, attempt to rebuild their social capital and, if so, are those more effective at doing so also academically more successful? In this paper, the first of its kind that we know of, we investigate this question by reporting on the nature and extent of the social capital renewal and academic performance for a sample of over 150 international students deriving from 27 countries of origin studying at a medium sized regional university in Australia. The growth in the number of international students and their share of total enrolments has been one of the key features of the Australian higher education landscape for at least a decade. It has provided financial windfalls for universities, an enriched and more diverse cultural experience on campuses, and a range of economic and social benefits for the local community. For the international students themselves, it has yielded the opportunity to study in a new country and obtain a degree from a highly regarded and mature university system. However, many newly arriving international students are distant from their support system of family, friends and networks, and so it is reasonable to assume that, on average, they land in Australia largely deprived of the close relationships and social networks that presumably contributed to their academic success back home. Hence, we are interested in international students because their behaviour in re-establishing social relationships in a foreign and unfamiliar cultural and academic environment may shed light on the nature and extent of their social capital renewal and whether such investments are positively associated with academic performance. The remainder of the paper is organised as follows. Section 2 examines the challenges facing international students within the context of the social capital literature. Section 3 presents background data on international students in Australia. Section 4 discusses our survey methodology and the resultant data on social capital renewal by a sample of international students studying in Australia. Section 5 reports our empirical findings on the relationship between social capital renewal and academic performance. Finally, Section 6 summarises the main findings of this study and offers some concluding comments, in particular on whether the findings have any broader policy implications.