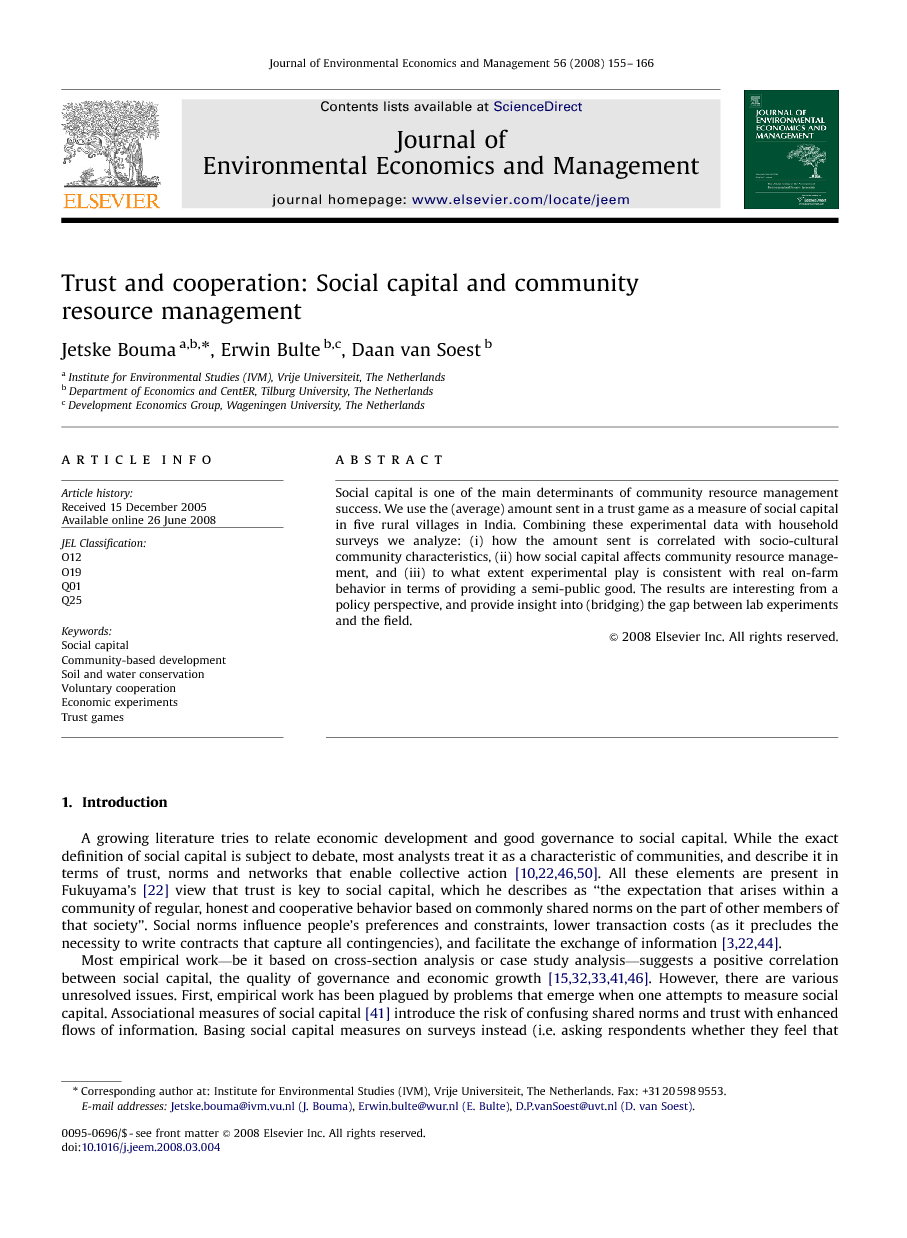 Social capital is one of the main determinants of community resource management success. We use the (average) amount sent in a trust game as a measure of social capital in five rural villages in India. Combining these experimental data with household surveys we analyze: (i) how the amount sent is correlated with socio-cultural community characteristics, (ii) how social capital affects community resource management, and (iii) to what extent experimental play is consistent with real on-farm behavior in terms of providing a semi-public good. The results are interesting from a policy perspective, and provide insight into (bridging) the gap between lab experiments and the field.

A growing literature tries to relate economic development and good governance to social capital. While the exact definition of social capital is subject to debate, most analysts treat it as a characteristic of communities, and describe it in terms of trust, norms and networks that enable collective action [10], [22], [46] and [50]. All these elements are present in Fukuyama's [22] view that trust is key to social capital, which he describes as “the expectation that arises within a community of regular, honest and cooperative behavior based on commonly shared norms on the part of other members of that society”. Social norms influence people's preferences and constraints, lower transaction costs (as it precludes the necessity to write contracts that capture all contingencies), and facilitate the exchange of information [3], [22] and [44]. Most empirical work—be it based on cross-section analysis or case study analysis—suggests a positive correlation between social capital, the quality of governance and economic growth [15], [32], [33], [41] and [46]. However, there are various unresolved issues. First, empirical work has been plagued by problems that emerge when one attempts to measure social capital. Associational measures of social capital [41] introduce the risk of confusing shared norms and trust with enhanced flows of information. Basing social capital measures on surveys instead (i.e. asking respondents whether they feel that other people can be trusted or not) introduces the well-known divergence between stated versus actual preferences and beliefs [17], and appears to measure trustworthiness rather than trust [24]. Second, the finding that trust is conducive to growth appears not to be robust at either the country level or the regional level [7] and [39]. While this may partly reflect a certain degree of substitutability between social capital and formal institutions, it is also likely that spatial scale matters, as it is not obvious that there should exist a relation between social capital and aggregate growth statistics [49]. In this paper, we construct a measure of social capital that encompasses both trust and altruism by implementing a series of economic experiments (trust games) using villagers as subjects in five rural villages in India. Our measure of social capital is based on actual behavior of respondents in trust game experiments, rather than on stated beliefs. We then relate experimental play and our measure of social capital to real-world voluntary contributions to a local public good: soil and water conservation. Soil and water conservation investments yield public as well as private benefits, as conservation investments undertaken by one agent imply increased availability of water and less soil runoff for other agents in the watershed. Our paper's results are of both scientific and policy relevance. The main scientific contribution is an exploration into the external validity of (artefactual field) experiments. Earlier work suggests behavior is context-dependent, and that cross-situational consistency of behavior (in the experiment and in real life) tends to be rather weak. It appears as if consistency is partly determined by whether “reality” refers to an environment where competitive pressures are present, or not. While the level of social preferences displayed by individuals in the market place appears to be much lower than displayed by subjects that knowingly participate in an (artefactual) experiment [37], there is evidence of consistent behavior across the lab and actual donations to charity [19]. This leaves us with an interesting question. If social preferences do not spill over to behavior in the domain of the market but are “generalizable” to behavior in other contexts, what happens in “intermediate cases” involving elements of both private and public benefits? The context at hand—investments in soil and water conservation—provides an excellent intermediate case to consider this question. Measuring the effects of social capital for countries like India has obvious policy relevance. Communities are increasingly the focus of local development and community resource management initiatives.1 Decision-makers in both government and non-governmental organizations (GOs and NGOs) are concerned about the effectiveness of policy interventions, and arguably the long-run sustainability of interventions is better guaranteed in communities with higher levels of social capital. If our measure of social capital is predictive of voluntary contributions to the semi-public good, economic experiments may guide GOs and NGOs to target those communities with the greatest chances of success. Improved understanding of social capital proxies enables development agencies to concentrate their efforts in those areas where the returns to their investments are largest. The main objectives and findings are as follows: (1) we explore to what extent individual social preferences, as measured in trust game experiments, are correlated with economically meaningful behavior “in the field.” We find that a subject's experimental play is not significantly correlated with his/her investments in soil and water conservation. This suggests such collective action investments may be closer to behavior in the market place [37] than to behavior in the realm of pure public goods provision [19]. (2) We analyze whether the average level of social capital in villages, as measured by the average amount sent in the trust game, is associated with individual investments in soil and water conservation. Interestingly we find this to be the case—but only for activities that are not subsidized by NGOs or governments. So, while we are unable to predict individual behavior in real life from experimental play, we do find a significant correlation between aggregate play and individual behavior. This suggests we may use the trust game to measure social capital, interpreting it as a community characteristic (but see Ref. [24]). (3) We analyze which conditions or factors are conducive to the emergence of social capital as measured in the trust game, and to what extent observable community characteristics (e.g., related to caste membership) may serve as a proxy for social capital in empirical analyses.

We have combined the results of an experimental study and a household survey in rural India to uncover the interlinkages between social capital, community characteristics, and the provision of a local semi-public good (investments in soil and water conservation maintenance). We explore to what extent play in our artefactual field experiment is consistent with subjects’ behavior “in the field” when the payoffs to their actions are partly private and partly public. Our results are mixed. First, we find that the average amount sent in the trust game—our proxy for social capital—is correlated with participation in community resource management. However, this is only the case if activities are not subsidized; pro-social motivations are obscured whenever financial compensation is provided and private considerations become dominant. We also find that average play in the trust game is correlated with social homogeneity (based on caste membership), and that the homogeneity measure might serve as a useful proxy for “trust.” It is equally informative, but in many cases much easier and cheaper to obtain. Nevertheless, we conclude it is possible to measure social capital with an economic experiment. Second, and in contrast, individual behavior in our artefactual field experiment does not seem “generalizable” to behavior in the field (regardless of subsidization). These results are relevant for the emerging literature on the external validity of experimental results. While some evidence suggests experimental play is informative about “real world social behavior” [14] and [19]), doubts are now mounting about its relevance for predicting behavior in the market place [37]. The absence of a positive association between an individual's experimental play and his investments in conservation suggests limited scope for generalization into the domain where actions potentially involve both private and public benefits. However, this appears not true when individual behavior is averaged out at the community level. We conclude further research is necessary to explore these issues in more detail.