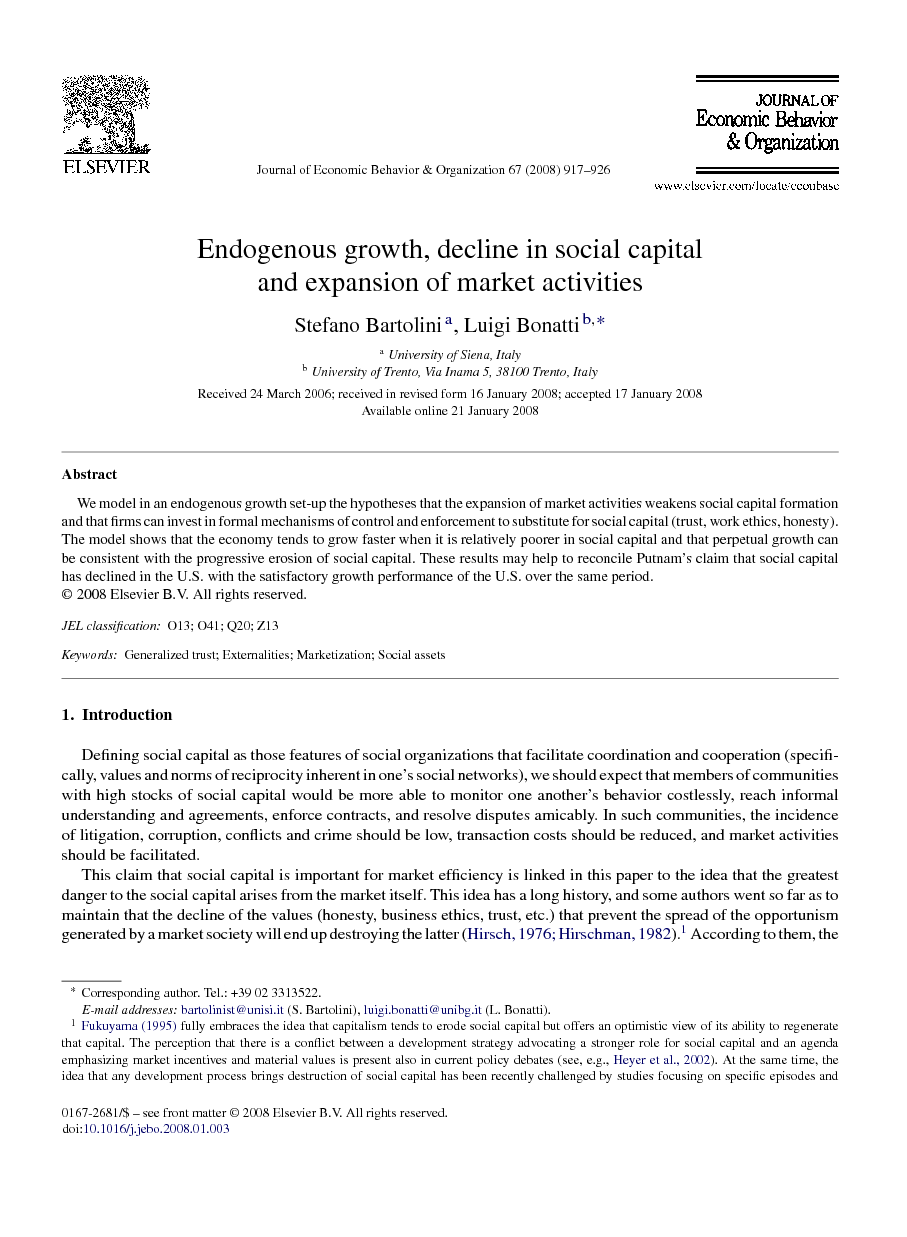 We model in an endogenous growth set-up the hypotheses that the expansion of market activities weakens social capital formation and that firms can invest in formal mechanisms of control and enforcement to substitute for social capital (trust, work ethics, honesty). The model shows that the economy tends to grow faster when it is relatively poorer in social capital and that perpetual growth can be consistent with the progressive erosion of social capital. These results may help to reconcile Putnam's claim that social capital has declined in the U.S. with the satisfactory growth performance of the U.S. over the same period.

In this paper we have insisted on an interpretation of social capital as a resource connected with group membership and social networks (Bourdieu, 1986) that tends to deteriorate as market activities become more pervasive. The deterioration of this resource can be interpreted as a decline in social cohesion and general trust that forces economic agents to raise their expenditure aimed at self-protecting from increased opportunism and defiant behavior. To shed light on the dynamics of an economy where social capital has these characteristics, we have augmented a Solow-Ramsey growth model by including: (i) social capital enhancing factor productivity, (ii) negative externalities affecting social capital formation and increasing with the level of market activity, (iii) the possibility for economic agents to substitute market services for social capital, (iv) positive externalities affecting total factor productivity and increasing with the aggregate stock of physical and human capital and (v) a labor–leisure choice. Within this framework, the economy may have multiple balanced growth paths (BGPs), and per capita GDP grows faster along the BGP characterized by a lower ratio between social capital and amount of resources invested in formal mechanisms of control and enforcement. In the special case in which market services are perfect substitutes for the services provided by social capital, it is shown that (i) the balanced growth path along which per capita GDP grows faster exhibits the lower ratio between social capital and physical capital, (ii) the economy converges asymptotically to the balanced growth path along which per capita GDP grows faster, the households devote more time to market activities and the social capital to physical capital ratio is lower, (iii) along the transition trajectory converging to the balanced growth path the social capital-physical and human capital ratio decreases monotonically and the time worked per household increases monotonically and (iv) perpetual growth can be consistent with the progressive erosion of social capital. The model presented here is consistent with the view that capitalism tends to erode the socio-cultural sediment on which it rests, but it does not share the view that this erosion imperils the growth prospects of the economy. In any case, we need systematic empirical evidence in order to assess how important are the impact of the expansion of market activities on social capital formation and the effects of the decline in social capital on the demand for market services that can substitute for it. Moreover, there are other elements of the relationship between social capital and economic growth that need to be clarified. In particular, future research should address the complex link connecting education and social capital and their joint impact on the growth process. Indeed, the existing literature has focused separately on various aspects of this connection, but without providing a formal framework for a unifying analysis of it.20 Finally, the emphasis on the relationship linking the education system to the society's endowment of social capital naturally raises the question of the interaction between social capital and government institutions and policies in affecting growth. Again, the necessity of further research derives from the fact that the existing literature has not yet formally treated this complex issue.