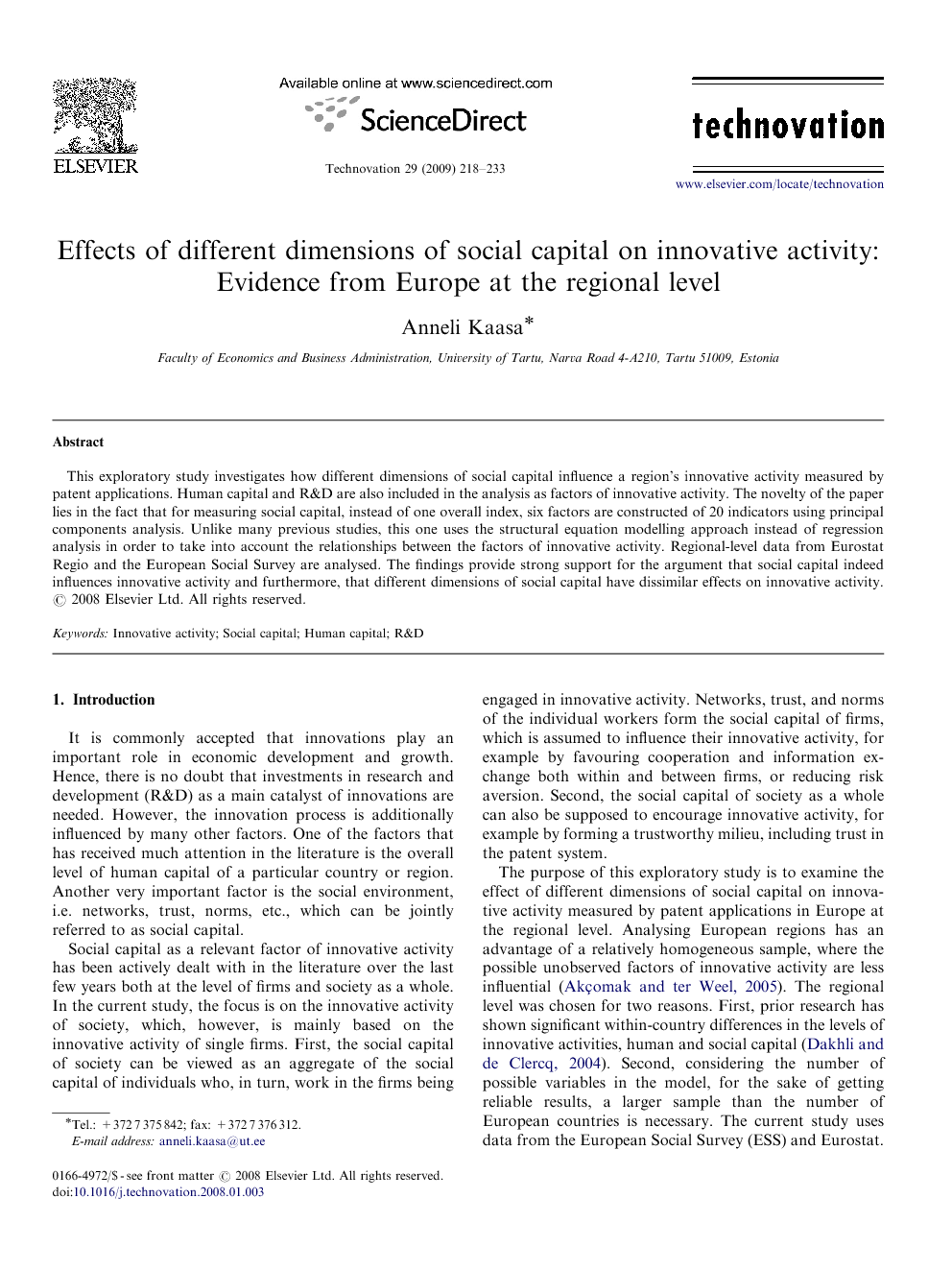 It is commonly accepted that innovations play an important role in economic development and growth. Hence, there is no doubt that investments in research and development (R&D) as a main catalyst of innovations are needed. However, the innovation process is additionally influenced by many other factors. One of the factors that has received much attention in the literature is the overall level of human capital of a particular country or region. Another very important factor is the social environment, i.e. networks, trust, norms, etc., which can be jointly referred to as social capital. Social capital as a relevant factor of innovative activity has been actively dealt with in the literature over the last few years both at the level of firms and society as a whole. In the current study, the focus is on the innovative activity of society, which, however, is mainly based on the innovative activity of single firms. First, the social capital of society can be viewed as an aggregate of the social capital of individuals who, in turn, work in the firms being engaged in innovative activity. Networks, trust, and norms of the individual workers form the social capital of firms, which is assumed to influence their innovative activity, for example by favouring cooperation and information exchange both within and between firms, or reducing risk aversion. Second, the social capital of society as a whole can also be supposed to encourage innovative activity, for example by forming a trustworthy milieu, including trust in the patent system. The purpose of this exploratory study is to examine the effect of different dimensions of social capital on innovative activity measured by patent applications in Europe at the regional level. Analysing European regions has an advantage of a relatively homogeneous sample, where the possible unobserved factors of innovative activity are less influential (Akçomak and ter Weel, 2005). The regional level was chosen for two reasons. First, prior research has shown significant within-country differences in the levels of innovative activities, human and social capital (Dakhli and de Clercq, 2004). Second, considering the number of possible variables in the model, for the sake of getting reliable results, a larger sample than the number of European countries is necessary. The current study uses data from the European Social Survey (ESS) and Eurostat. Although the density and composition of firms (by industries) varies by regions, this aspect is left out from this study for reasons of both simplification and data unavailability. To take account of other possible factors, the current analysis includes human capital and R&D as control variables presumably influencing patent applications. Although there are no doubt many other factors, these control variables were chosen on the basis of their importance. The novelty and contribution of this study lies in the following aspects. First, many previous studies have viewed social capital as a one-dimensional concept, measuring it by an overall index, one variable or one latent construct (see, for instance, Akçomak and ter Weel, 2005 and Akçomak and ter Weel, 2006; Subramaniam and Youndt, 2005). However, it is possible that different dimensions of social capital may have dissimilar impacts on innovative activity, for example, networks that facilitate information exchange are expected to encourage innovative activity, while norms of orderliness may suppress new ideas and counteract innovations. Therefore, this paper examines the influence of social capital on patent applications by separate dimensions. Second, the number of different dimensions of social capital included in the present analysis is higher than in previous studies analysing more than one dimension (Dakhli and de Clercq, 2004; Landry et al., 2002; Tsai and Ghoshal, 1998). Third, with regard to methodology, the previous studies using regression analysis have failed to take into account the relationships between the factors of innovative activity themselves. To overcome this problem, this study uses the structural equation modelling (SEM) approach. The paper is structured as follows. Section 2 presents the conceptual background and discusses the possible causal relationships. Section 3 introduces the data analysed and deals with the measurement. Section 4 presents the results of the structural model estimation. Section 5 comprises the discussion, points out the limitations and makes recommendations for future research. Section 6 draws the conclusions.