عنوان انگلیسی
Social capital as social networks: A new framework for measurement and an empirical analysis of its determinants and consequences
دانلود فوری مقاله + سفارش ترجمه 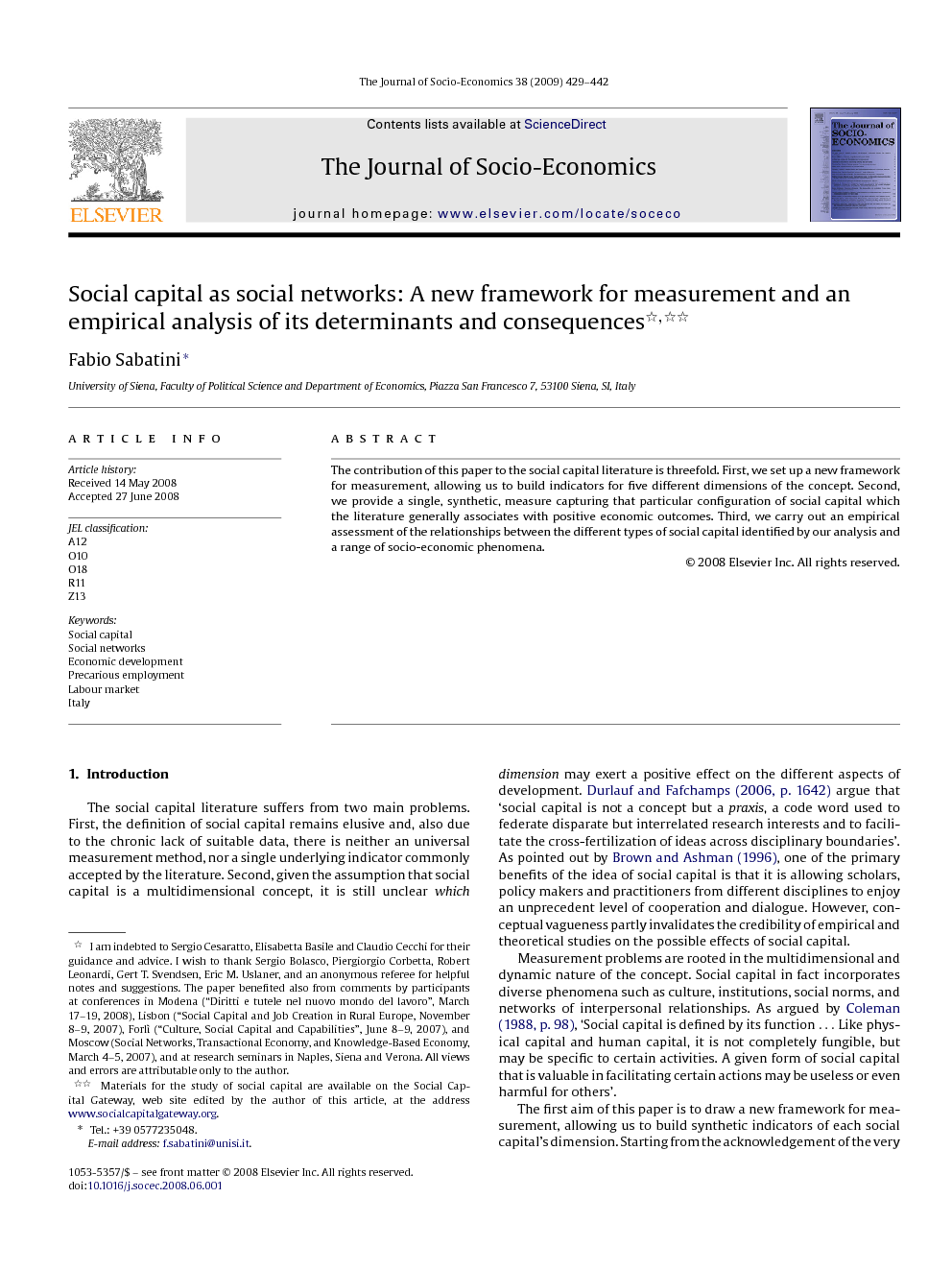 The contribution of this paper to the social capital literature is threefold. First, we set up a new framework for measurement, allowing us to build indicators for five different dimensions of the concept. Second, we provide a single, synthetic, measure capturing that particular configuration of social capital which the literature generally associates with positive economic outcomes. Third, we carry out an empirical assessment of the relationships between the different types of social capital identified by our analysis and a range of socio-economic phenomena.

Overall, the empirical evidence in this paper allows us to distinguish between at least three types of networks. Strong family ties, corresponding to what the theoretical literature generally calls bonding social capital, strong and weak ties connecting friends, acquaintances and neighbours (bridging social capital), and weak ties connecting people belonging different socio-economic backgrounds within the activity of voluntary organizations (linking social capital). Such networks juxtapose each other in the Italian regions: Areas characterized by higher levels of bonding social capital can suffer from a lack of bridging and linking social capital. The analysis provides synthetic indicators for each type of network, that can be used as rough data in further econometric investigations, thereby proposing a new strategy for a systematic assessment of social capital's endowments, determinants, and consequences. Another useful tool for further econometric analyses is the “global indicator”, built by means of a MFA in Section 5.7, capturing that particular combination of the diverse social capital's dimensions which the literature generally associates with positive socio-economic outcomes. Higher levels of this particular measure indicate lower endowments of bonding social capital, a better quality of family relationships, more social participation and a higher involvement in community affairs. Other interesting findings of the multidimensional analysis can be summarized as follows. Interest in politics and public affairs is found to be negatively correlated with the bonding social capital shaped by strong family ties. On the contrary, the bridging social capital connected to relational goods’ consumption is generally accompanied by higher civic awareness and social participation. Active political participation through parties is not correlated to civic participation through voluntary organizations, but exhibits an interesting positive relationship with bonding social capital. Southern regions like Molise, Calabria and Puglia are characterized by high levels of people involvement in political parties life which, however, do not correspond to a diffuse interest in politics and public affairs. This trend can be attributed to the fact that, in Southern Italy, political militancy is often considered as a mean to pursue narrow, sectarian, interests and to obtain patronage favours, rather than a way to participate in collective affairs. Higher levels of religious participation are strongly correlated with the presence of bonding social capital and with a scarce interest in politics and civic affairs, while bridging and linking ties show a significant correlation with a low religious participation. This may confirm Putnam's (1995) interpretation of the catholic church as a particular form of bonding social capital, which do not create mutuality and equality of participation, and do not have the same effect as membership in social capital-rich groups. The SEM analysis carried out in Section 6 shows that the literature generally underestimates the positive role exerted on well-being by the mutual assistance and social protection mechanisms promoted by the family. Through their ability to mitigate precariousness, strong family ties may act as a means of defence against high levels of unemployment. In other words, bonding social capital can be seen not only as a cause of backwardness, but also as one of its possible consequences. The widespread idea that social contacts function as a powerful job placement factor is only partly confirmed by data. In Italy, just strong ties support the reduction of precariousness, while weak ties connecting friends and acquaintances seem not to be helpful to such purposes. What certainly deserves further investigations is the effect of social networks-induced job matching processes on the allocation of talents: significant mismatches of talents and an excessive job market's closure to outsiders may cause a reduction of efficiency compensating the beneficial effects of precariousness’ alleviation. Anyway, it is clear that neglecting the social embeddedness of actors seriously invalidates the explanatory power of any economic analysis of the labour market. Voluntary organizations are the only type of networks that are positively correlated with the economic performance. In Italy, the associational activity is strictly connected to sound ideological motivations, and generally implies the sharing of moral norms of trust and reciprocity that can counteract the negative effects of the ‘amoral familism’, as well as the tendency of organizations to lobby for the narrow interests of their members.