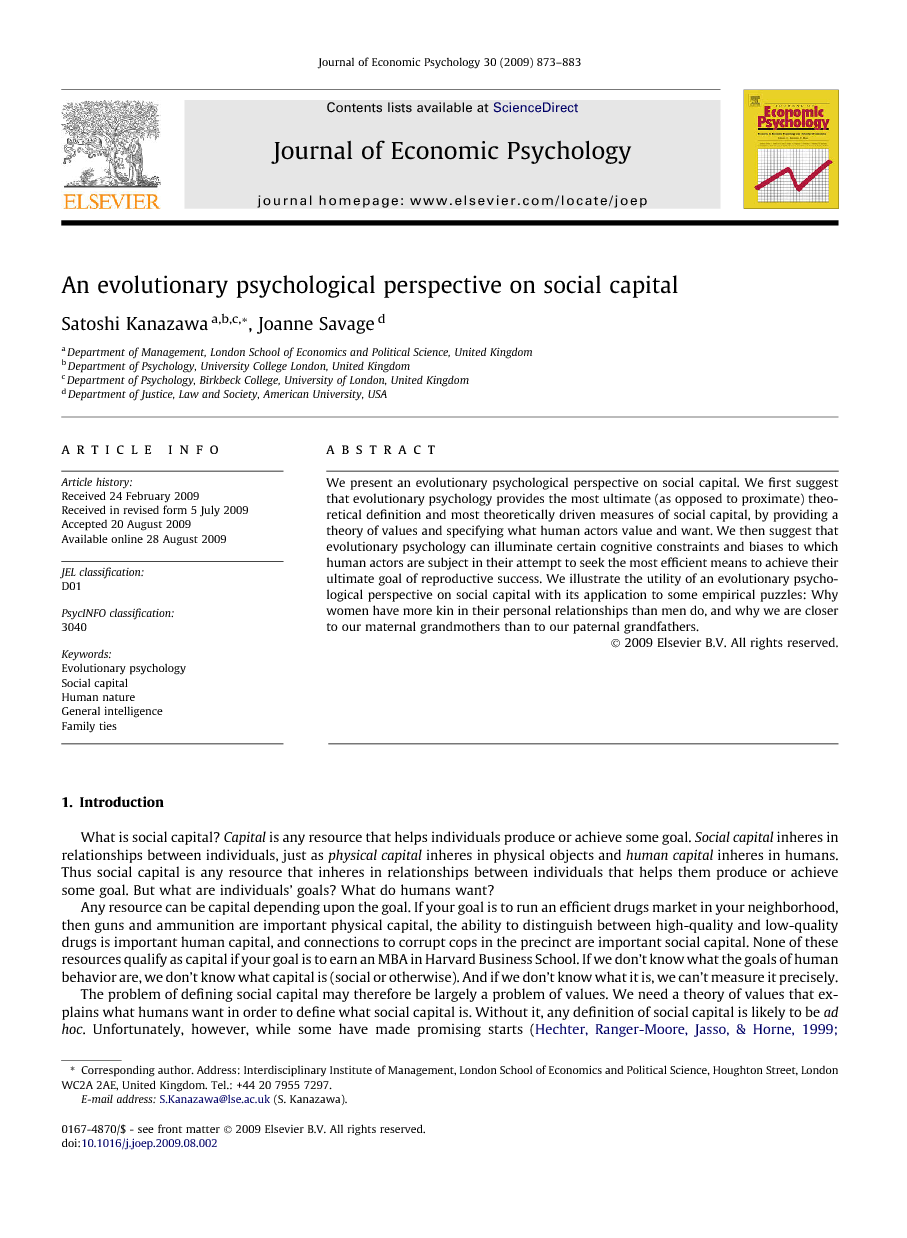 What is social capital? Capital is any resource that helps individuals produce or achieve some goal. Social capital inheres in relationships between individuals, just as physical capital inheres in physical objects and human capital inheres in humans. Thus social capital is any resource that inheres in relationships between individuals that helps them produce or achieve some goal. But what are individuals’ goals? What do humans want? Any resource can be capital depending upon the goal. If your goal is to run an efficient drugs market in your neighborhood, then guns and ammunition are important physical capital, the ability to distinguish between high-quality and low-quality drugs is important human capital, and connections to corrupt cops in the precinct are important social capital. None of these resources qualify as capital if your goal is to earn an MBA in Harvard Business School. If we don’t know what the goals of human behavior are, we don’t know what capital is (social or otherwise). And if we don’t know what it is, we can’t measure it precisely. The problem of defining social capital may therefore be largely a problem of values. We need a theory of values that explains what humans want in order to define what social capital is. Without it, any definition of social capital is likely to be ad hoc. Unfortunately, however, while some have made promising starts ( Hechter et al., 1999, Schwartz, 1992, Schwartz and Bilsky, 1987 and Wildavsky, 1987), there is presently no general theory of values that is widely accepted ( Hechter, 1992, Hechter, 1994 and Hechter et al., 1993). This is why nobody seems to know what exactly social capital is, or different people define it differently (Paxton, 1999). The lack of consensus on what social capital is has led researchers to define it in widely varied ways: participation in voluntary associations (Paxton, 1999, Paxton, 2002 and Putnam, 1995); voter turnout (Putnam, 1995); norm enforcement and social control (Coleman, 1988); trust (Coleman, 1988, Paxton, 1999 and Paxton, 2002); social network ties (Burt, 1998); family composition (presence of two biological parents; Portes, 2000); and “embedded social resources” (resources one can access through network ties; Lin, 2000). The lack of consensus has also led many empirical studies on social capital to contain sections called “Social Capital” or “What is Social Capital?” (Coleman, 1988, McNeal, 1999, Paxton, 1999, Paxton, 2002, Renzulli et al., 2000 and Schiff, 1992). Paxton (1999, p. 90) observes that “the term “social capital” is used in many recent articles but in vastly different ways.” We do not seem to have as much trouble defining physical or human capital as we do defining social capital, because the concepts of physical and human capital are often used in microeconomics and rational choice theory, where the human goals are narrowly defined economically (the maximization of individual utility, which practically often means wealth or income maximization). In contrast, scholars who discuss social capital have a wider view of social life than how economists view economic life, and do not always know what humans value in social life (even though they may know what humans value in economic life). What makes clear definitions of physical and human capital possible is economists’ clear definition of human values in economic life. Evolutionary psychology is currently a strong contender for a general theory of values (Ben-Ner and Putterman, 2000, Horne, 2004 and Kanazawa, 2001a). It is a general theoretical perspective that can explain the ultimate (as opposed to proximate) causes of human behavior, cognition, preferences and emotions. Evolutionary psychology can therefore theoretically define human goals, and thus social (as well as physical and human) capital. Evolutionary psychology is compatible with a variety of proximate theories of values and goals. In this paper, we present an evolutionary psychological perspective on social capital. Our aim is twofold. First, we suggest that evolutionary psychology provides the most ultimate (as opposed to proximate) theoretical definition and most theoretically driven measures of social capital, by specifying what human actors value and want. Second, we suggest that evolutionary psychology can illuminate certain cognitive constraints and biases to which human actors are subject in their attempt to seek the most efficient means to achieve their ultimate goal of reproductive success. We then illustrate the utility of an evolutionary psychological perspective on social capital with its application to one empirical puzzle: why women have more kin in their social networks than men do.