عنوان انگلیسی
The influence of social capital on strategic choice: An examination of the effects of external and internal network relationships on strategic complexity
دانلود فوری مقاله + سفارش ترجمه 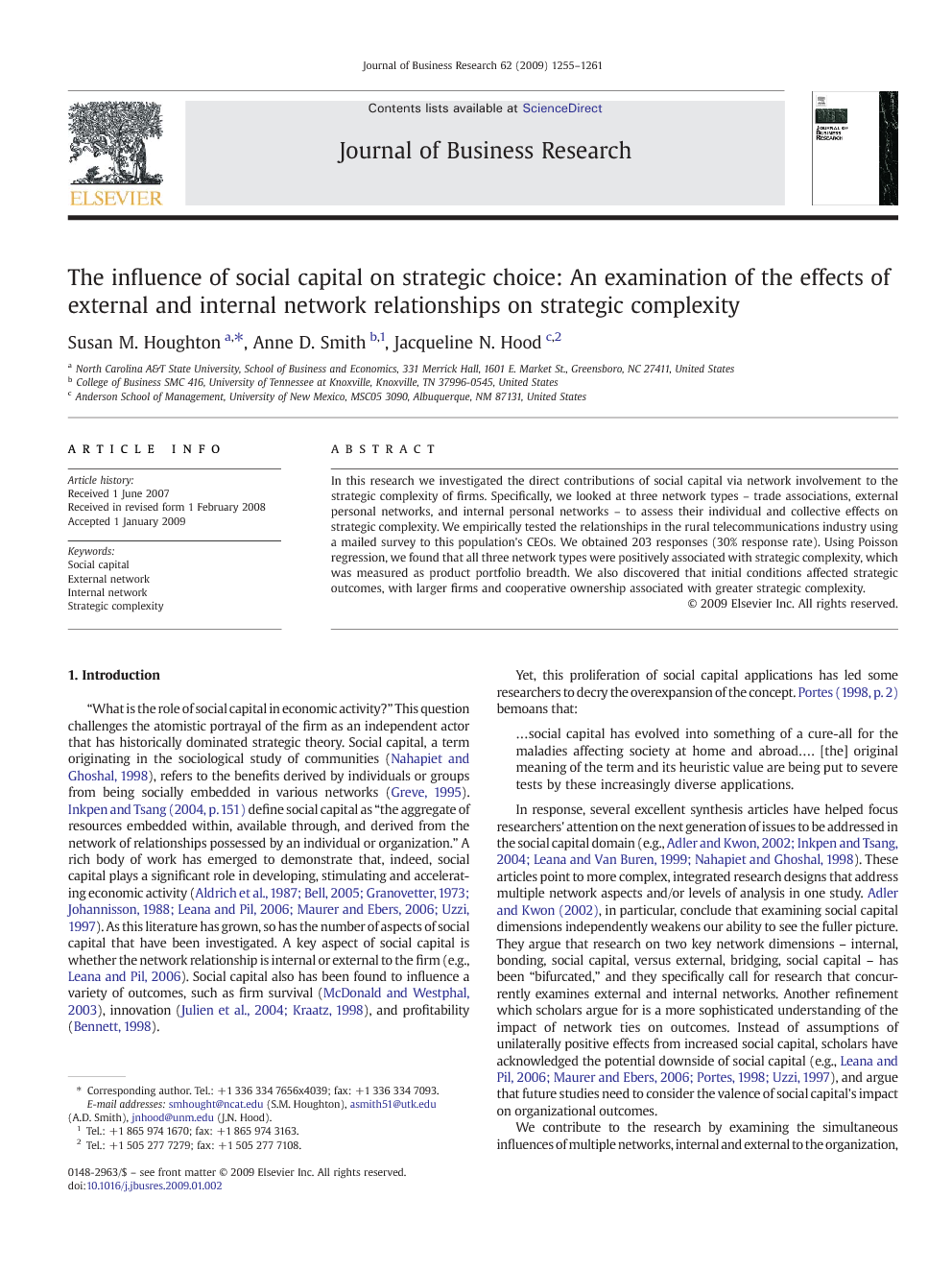 In this research we investigated the direct contributions of social capital via network involvement to the strategic complexity of firms. Specifically, we looked at three network types – trade associations, external personal networks, and internal personal networks – to assess their individual and collective effects on strategic complexity. We empirically tested the relationships in the rural telecommunications industry using a mailed survey to this population's CEOs. We obtained 203 responses (30% response rate). Using Poisson regression, we found that all three network types were positively associated with strategic complexity, which was measured as product portfolio breadth. We also discovered that initial conditions affected strategic outcomes, with larger firms and cooperative ownership associated with greater strategic complexity

“What is the role of social capital in economic activity?” This question challenges the atomistic portrayal of the firm as an independent actor that has historically dominated strategic theory. Social capital, a term originating in the sociological study of communities (Nahapiet and Ghoshal, 1998), refers to the benefits derived by individuals or groups from being socially embedded in various networks (Greve, 1995). Inkpen and Tsang (2004, p. 151) define social capital as “the aggregate of resources embedded within, available through, and derived from the network of relationships possessed by an individual or organization.” A rich body of work has emerged to demonstrate that, indeed, social capital plays a significant role in developing, stimulating and accelerating economic activity (Aldrich et al., 1987, Bell, 2005, Granovetter, 1973, Johannisson, 1988, Leana and Pil, 2006, Maurer and Ebers, 2006 and Uzzi, 1997). As this literature has grown, so has the number of aspects of social capital that have been investigated. A key aspect of social capital is whether the network relationship is internal or external to the firm (e.g., Leana and Pil, 2006). Social capital also has been found to influence a variety of outcomes, such as firm survival (McDonald and Westphal, 2003), innovation (Julien et al., 2004 and Kraatz, 1998), and profitability (Bennett, 1998). Yet, this proliferation of social capital applications has led some researchers to decry the overexpansion of the concept. Portes (1998, p. 2) bemoans that: …social capital has evolved into something of a cure-all for the maladies affecting society at home and abroad…. [the] original meaning of the term and its heuristic value are being put to severe tests by these increasingly diverse applications. In response, several excellent synthesis articles have helped focus researchers' attention on the next generation of issues to be addressed in the social capital domain (e.g., Adler and Kwon, 2002, Inkpen and Tsang, 2004, Leana and Van Buren, 1999 and Nahapiet and Ghoshal, 1998). These articles point to more complex, integrated research designs that address multiple network aspects and/or levels of analysis in one study. Adler and Kwon (2002), in particular, conclude that examining social capital dimensions independently weakens our ability to see the fuller picture. They argue that research on two key network dimensions – internal, bonding, social capital, versus external, bridging, social capital – has been “bifurcated,” and they specifically call for research that concurrently examines external and internal networks. Another refinement which scholars argue for is a more sophisticated understanding of the impact of network ties on outcomes. Instead of assumptions of unilaterally positive effects from increased social capital, scholars have acknowledged the potential downside of social capital (e.g., Leana and Pil, 2006, Maurer and Ebers, 2006, Portes, 1998 and Uzzi, 1997), and argue that future studies need to consider the valence of social capital's impact on organizational outcomes. We contribute to the research by examining the simultaneous influences of multiple networks, internal and external to the organization, on strategic complexity. In this research, we investigate two questions: Do external and internal networks contribute independently and positively to strategic complexity? and, when considering external and internal networks together, do they offset each other's potential advantages?