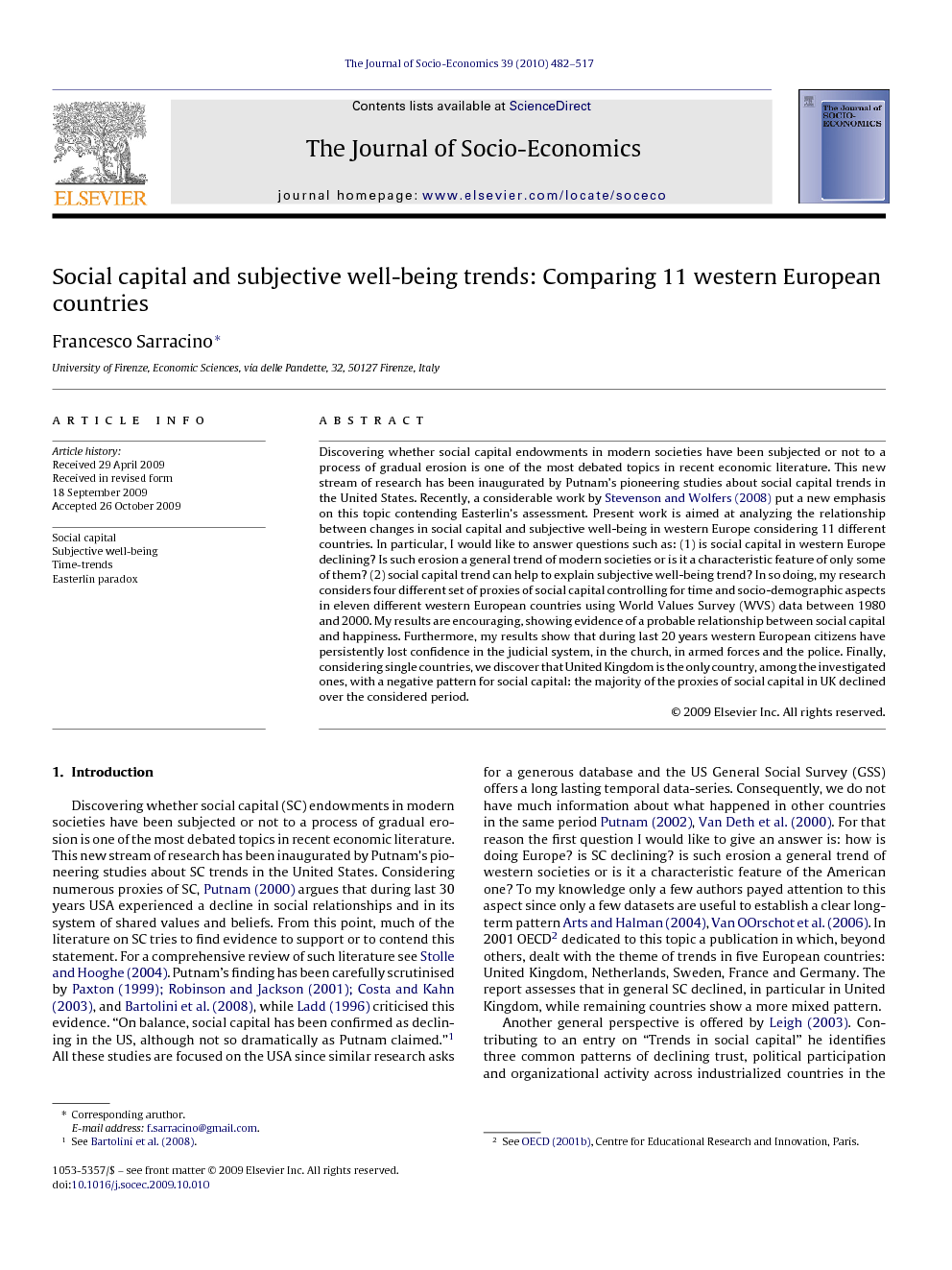 Discovering whether social capital endowments in modern societies have been subjected or not to a process of gradual erosion is one of the most debated topics in recent economic literature. This new stream of research has been inaugurated by Putnam’s pioneering studies about social capital trends in the United States. Recently, a considerable work by Stevenson and Wolfers (2008) put a new emphasis on this topic contending Easterlin’s assessment. Present work is aimed at analyzing the relationship between changes in social capital and subjective well-being in western Europe considering 11 different countries. In particular, I would like to answer questions such as: (1) is social capital in western Europe declining? Is such erosion a general trend of modern societies or is it a characteristic feature of only some of them? (2) social capital trend can help to explain subjective well-being trend? In so doing, my research considers four different set of proxies of social capital controlling for time and socio-demographic aspects in eleven different western European countries using World Values Survey (WVS) data between 1980 and 2000. My results are encouraging, showing evidence of a probable relationship between social capital and happiness. Furthermore, my results show that during last 20 years western European citizens have persistently lost confidence in the judicial system, in the church, in armed forces and the police. Finally, considering single countries, we discover that United Kingdom is the only country, among the investigated ones, with a negative pattern for social capital: the majority of the proxies of social capital in UK declined over the considered period.

The aim of present study was to point out trends of social capital in western European countries finding evidence to support the thesis that SC trends can help to explain SWB trends. In this way SC gains a new dimension: it can give further meaning to the widely used term well-being. Whenever present thesis would be corroborated by further research, SC would acquire a central role in the definition of our policy agenda. For example, future economic policies should not only focus on ways to promote economic growth, but should pay attention also to their effects on SC. Using different regression techniques, following the nature of dependent variables, I tried to assess the trends of four proxies of SC for each country in the period between 1980 and 2000. Following a broadly accepted approach in the literature, I adopted the following variables: trust in individuals, membership in eighteen different voluntary organizations, performing unpaid voluntary work in 18 organizations and confidence in ten institutions. Results are quite innovative for at least two reasons: (1) contemporary literature largely focused on trends in USA rather than in European countries. This is mainly due to the fact that USA have large databases allowing such studies for longer periods of time (for example the U.S. GSS); (2) following the debate on the Easterlin paradox, my results suggest that we cannot discard the hypothesis that the trend of SC is important for the trend of SWB. From this point of view, it is important to stress that I am not performing a causal analysis, but I am simply assessing SC and SWB trends and notice that in 10 out of 11 countries signs of SC trends are concordant with signs of SWB trends. Such finding implies also that the theoretical predictions of the NEG model are largely met confirming the relevance of the model as explanatory tool. Moreover, whether such evidence would be substantiated by future research, we could say that USA do not represent a “puzzling outlier” since “income growth is desirable as far as it is not associated with a deterioration of SC.”17 Nonetheless, the question about whether SC trend can help to explain SWB trend is still an open question asking for further and deeper research. Summarizing, my findings are the following: 1. Trends for SC in the analysed European countries are mainly positive (in particular for relational goods). 2. Although the trends of membership and unpaid voluntary work in Great Britain are contrasting, still this country appears as an exception in the European landscape with declining trends for the majority of the SC proxies. 3. All the considered countries seem affected by a general crisis of some particular institutions. 4. Given the concordance between SC and SWB trends in 10 out of 11 cases, we cannot reject the hypothesis that SC can help to explain SWB. Concluding, present research allows to remark a few aspects: the first one is that the majority of the western European countries and USA are not exactly following the same pattern. While both regions have experienced an institutional crisis during last 20 years, relational social capital and subjective well-being in western Europe increased. Nonetheless, we should take in mind that these figures need further investigation to extend both the number of observed countries and the length of the considered period. By now, present results suggesting a quite different pattern between USA and the western European sample push future research in two main directions: (1) to enlarge present research to discover trends relative to other countries; (2) to investigate the causes of such a different performance. Which forces have pushed toward an increasing erosion of social capital in USA? Is European social capital subjected to the same erosive forces? (3) Do SC trends explain SWB trends in Europe?