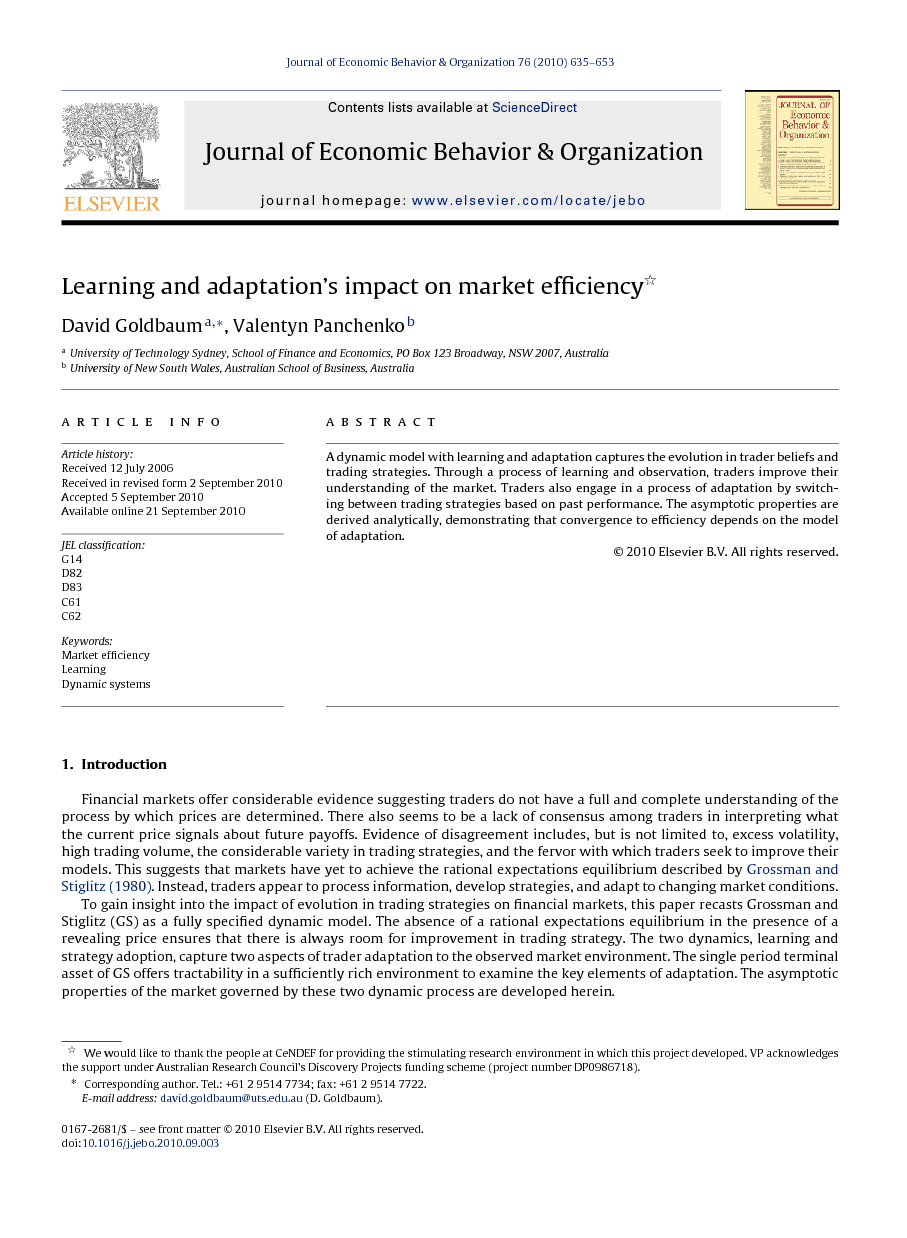 A dynamic model with learning and adaptation captures the evolution in trader beliefs and trading strategies. Through a process of learning and observation, traders improve their understanding of the market. Traders also engage in a process of adaptation by switching between trading strategies based on past performance. The asymptotic properties are derived analytically, demonstrating that convergence to efficiency depends on the model of adaptation.

Financial markets offer considerable evidence suggesting traders do not have a full and complete understanding of the process by which prices are determined. There also seems to be a lack of consensus among traders in interpreting what the current price signals about future payoffs. Evidence of disagreement includes, but is not limited to, excess volatility, high trading volume, the considerable variety in trading strategies, and the fervor with which traders seek to improve their models. This suggests that markets have yet to achieve the rational expectations equilibrium described by Grossman and Stiglitz (1980). Instead, traders appear to process information, develop strategies, and adapt to changing market conditions. To gain insight into the impact of evolution in trading strategies on financial markets, this paper recasts Grossman and Stiglitz (GS) as a fully specified dynamic model. The absence of a rational expectations equilibrium in the presence of a revealing price ensures that there is always room for improvement in trading strategy. The two dynamics, learning and strategy adoption, capture two aspects of trader adaptation to the observed market environment. The single period terminal asset of GS offers tractability in a sufficiently rich environment to examine the key elements of adaptation. The asymptotic properties of the market governed by these two dynamic process are developed herein. The GS model places informed traders in the market with rational uninformed traders. The former gain access to private information through costly research. The latter seek to extract the private information from the price. Each trader makes full use of the information to which he or she has access. This project retains much of the structure of the GS market as well as the notion that traders make full use of the available information.1 In this behavior, they are rational, but here the uninformed traders are boundedly rational in that they are denied knowledge of the true relationship between the observed price and the expected payoff. The traders instead must, as in Bray (1982), attempt to learn the relationship through observation of market data. This is the learning process that GS presume to have already taken place prior to their analysis.2 Distinct from Bray (1982), concurrent with the learning process, the traders choose between the two information options. Such a dynamic population is implicit in the GS model, but is not explicitly modeled in their static examination.3 GS consider the fixed point equilibrium of the population process, having presumed prior convergence to rational expectations in the traders’ beliefs. The importance of examining both as simultaneous processes is that the two dynamic processes, learning and the population process, interact, affecting market behavior both during evolution and in the asymptotic convergence. Two types of population processes are examined and compared to explore the different implications for how they shape the market's asymptotic behavior. One family includes the Discrete Choice Dynamics introduced by Brock and Hommes, 1997 and Brock and Hommes, 1998 and the other family includes Replicator Dynamics. Both processes have received extensive attention in the economics literature as tools for modeling evolving populations in a discrete choice setting. The second key alteration to the GS model is to remove the random supply of the risky security, thereby removing the mechanism that ensures the existence of an equilibrium to the population process. As a result, the information advantage held by the informed traders only exists while the learning process is ongoing. Just how the dynamic model resolves the conflict between convergence in the learning process and the market's need for noise in the price offers insight into the evolution that results from traders’ adaptation to endogenously changing market conditions. The resolution depends on the interaction between the two dynamic processes as it is shaped by the potential absence of the population fixed point. The nature of this interaction determines whether market efficiency is the limiting case. The tractability of the present model is absent in the Goldbaum (2005) and Goldbaum (2006) simulations, also based on models of learning and strategy adoption. This examination's simpler market, partially the result of the terminal risky asset, enables analytical investigation of the relevant dynamic processes, eliminating the dependence on simulation based analysis. The paper proceeds as follows. Section 2 develops the model and establishes the conditions for existence and stability of the rational expectations equilibrium as the fixed point to the dynamic processes. Section 3 considers the issue of market efficiency analytically and in simulation. Section 4 uses simulation to determine how the rate of learning is affected by the population process. Section 5 concludes.

The asymptotic convergence properties of a financial market with learning and adaptation have been derived analytically. The analysis reveals that, having explicitly modeled the dynamic processes and accounted for their interaction; market efficiency is possible, the lack of a fixed point need not be seen as a paradox, and a non-revealing price can be modeled as endemic to the market rather than the product of an ad hoc imposition of noise. The process of population dynamics matters to the solution. The Innovation Population Dynamic (IPD) generates convergence in both learning and the population towards an attractor, but the dual convergence is demonstrated to generate persistent pricing errors. The Level Population Dynamic (LPD) produces convergence towards a fixed point that allows for the emergence of an efficient price. Market efficiency arises from the Level Population Dynamic process because it produces a persistent population of informed traders, despite their underperformance relative to the uninformed traders. The population process is different from that envisioned by Grossman and Stiglitz but, in the case of the Discrete Choice Dynamics, the process has been employed extensively in the dynamic choice literature based on a strong empirical and theoretical foundation. The Discrete Choice model offers a couple of intuitive explanations of how such a group of trader can remain present, but other models capable of generating a persistent population of informed traders may exist as well, offering their own explanations. The original paradox observed by Grossman and Stiglitz is a product of the discontinuity in expected profits that arises in the absence of informed traders. This results in the absence of a Rational Expectations Equilibrium. Given that the uninformed traders have the correct model for extracting the private signal from the price, no barrier exists to prevent the entire population of traders from attempting to adopt the uninformed strategy, achieving the point of discontinuity. The Grossman and Stiglitz model resolve the paradox by creating an equilibrium away from the point of discontinuity by injecting noise into the price. Like Grossman and Stiglitz, the Innovation Population Dynamics generates an environment in which, asymptotically, the entire population converges towards full adoption of the uninformed strategy. Contrary to Grossman and Stiglitz, in the presence of the learning process the discontinuity at the point of attraction ceases to be a problem in need of a solution. Importantly, the rate at which the traders adopt the uninformed strategy is tied to the rate at which the traders improve their understanding of the market. In the presence of error, excessive reliance on the uninformed strategy produces a pricing error that maintains a population of informed traders. As the uninformed model improves, the proportion of informed traders declines, but the informed strategy cannot be completely abandoned while error exists in the uninformed traders’ model, even as the error declines to zero. The system exists and operates out of equilibrium. It is not necessary to create an equilibrium for the population process through assumption. Error is introduced into the price by the uninformed traders’ use of an imperfect model. The population process tunes the market to maintain a persistent error in the price despite the diminishing error in the model. The process is a financial market version of the Malthusian Trap. Increasing adoption of the increasingly accurate model for extracting information from the price produces a persistent pricing error. The pricing error creates the space necessary for a population of informed traders to maintain a profitable presence in a competitive market. These two versions of the model are, of course, simple abstractions of more complex behavior. The learning and adoption process can be seen as capturing the efforts by traders to learn from and adapt to the evolving market of which they have an imperfect understanding.