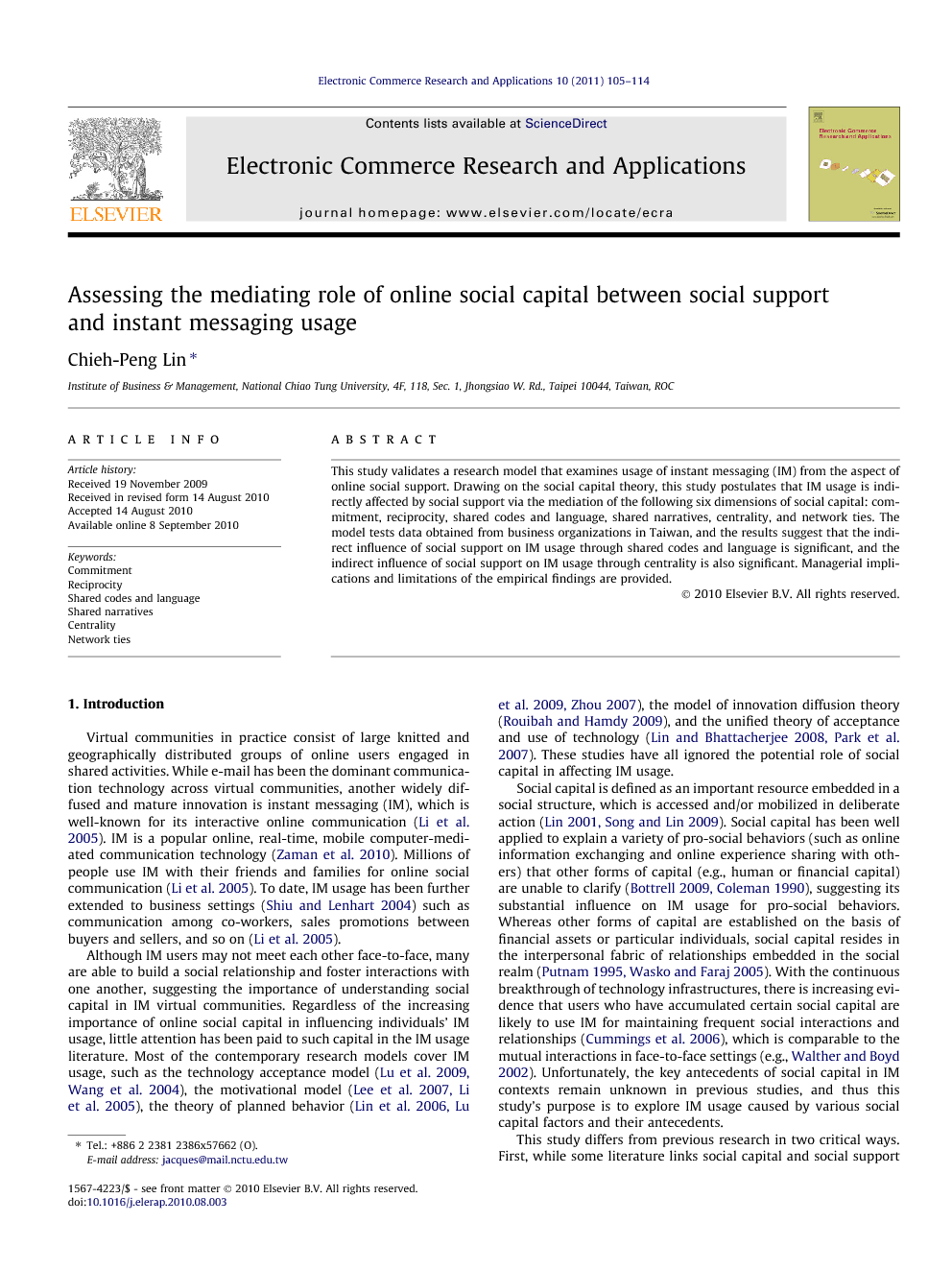 Virtual communities in practice consist of large knitted and geographically distributed groups of online users engaged in shared activities. While e-mail has been the dominant communication technology across virtual communities, another widely diffused and mature innovation is instant messaging (IM), which is well-known for its interactive online communication (Li et al. 2005). IM is a popular online, real-time, mobile computer-mediated communication technology (Zaman et al. 2010). Millions of people use IM with their friends and families for online social communication (Li et al. 2005). To date, IM usage has been further extended to business settings (Shiu and Lenhart 2004) such as communication among co-workers, sales promotions between buyers and sellers, and so on (Li et al. 2005). Although IM users may not meet each other face-to-face, many are able to build a social relationship and foster interactions with one another, suggesting the importance of understanding social capital in IM virtual communities. Regardless of the increasing importance of online social capital in influencing individuals’ IM usage, little attention has been paid to such capital in the IM usage literature. Most of the contemporary research models cover IM usage, such as the technology acceptance model (Lu et al., 2009 and Wang et al., 2004), the motivational model (Lee et al., 2007 and Li et al., 2005), the theory of planned behavior (Lin et al., 2006, Lu et al., 2009 and Zhou, 2007), the model of innovation diffusion theory (Rouibah and Hamdy 2009), and the unified theory of acceptance and use of technology (Lin and Bhattacherjee, 2008 and Park et al., 2007). These studies have all ignored the potential role of social capital in affecting IM usage. Social capital is defined as an important resource embedded in a social structure, which is accessed and/or mobilized in deliberate action (Lin, 2001 and Song and Lin, 2009). Social capital has been well applied to explain a variety of pro-social behaviors (such as online information exchanging and online experience sharing with others) that other forms of capital (e.g., human or financial capital) are unable to clarify (Bottrell, 2009 and Coleman, 1990), suggesting its substantial influence on IM usage for pro-social behaviors. Whereas other forms of capital are established on the basis of financial assets or particular individuals, social capital resides in the interpersonal fabric of relationships embedded in the social realm (Putnam, 1995 and Wasko and Faraj, 2005). With the continuous breakthrough of technology infrastructures, there is increasing evidence that users who have accumulated certain social capital are likely to use IM for maintaining frequent social interactions and relationships (Cummings et al. 2006), which is comparable to the mutual interactions in face-to-face settings (e.g., Walther and Boyd 2002). Unfortunately, the key antecedents of social capital in IM contexts remain unknown in previous studies, and thus this study’s purpose is to explore IM usage caused by various social capital factors and their antecedents. This study differs from previous research in two critical ways. First, while some literature links social capital and social support to IT usage which focuses on qualitative rationales (e.g., Drentea and Moren-Cross 2005), this study complements the previous qualitative studies by providing empirical confirmations and by examining various dimensions of social capital in greater depth. Particularly, this study decomposes social capital into six specific constructs – commitment, reciprocity, shared codes and language, shared narratives, centrality, and network ties – that help e-commerce marketers or corporate managers learn about efficient approaches in order to strengthen people’s IM usage. Second, although previous research finds that health-related Internet use is associated with social support among online individuals (Kalichman et al. 2003), previous research rarely discusses how the association between social support and IM usage may be fully mediated and by what factors. This study empirically confirms whether such associations are fully or partially mediated by social capital, further complementing the previous research. The rest of the paper proceeds as follows. The next section describes the theoretical underpinnings of social capital and formulates a research model of IM usage based on social capital as the mediator. The third section presents our research methods, including our choice of empirical context, subject samples, and instrumentation. The fourth section describes the data analysis procedures and results. The fifth section outlines the implications of our findings for future IM usage research and practice, and then identifies the study’s limitations.

This study evaluates a formation of IM usage by considering social capital as an important theoretical mediator. It is argued that online communities, which provide the contingency for enhancing social support both expressively and instrumentally, are likely to foster greater IM usage. Our empirical research (from the aspects of social support and social capital) emphasizes the social utility of developing and maintaining social relationships. This is an important but often ignored perspective of IM applications (Li et al. 2005). The findings of this study shed light on several areas that could benefit marketers, service providers, or corporate managers. For example, employees who frequently provide social support to others via IM are likely to have intensive social capital and frequent IM usage. As a result, these employees may be effectively appointed as key coordinators who require high levels of responsiveness towards their co-workers (or customers) via IM. For instance, if the task of HRM service to employees in an organization is assigned to staff who reveal a low inclination of providing social support, then they are unlikely to establish social capital and become unable to solve problems (e.g., problems of training and education) with IM in a timely manner. This study complements previous studies that have demonstrated the power of social influence in explaining virtual community participation (e.g., Bagozzi and Dholakia 2002, Dholakia et al. 2004). Particularly, the findings of this study help to distinguish different weights between six dimensions of social capital regarding their influence on IM usage. Marketers (or corporate managers) leveraging critical mediators (i.e., commitment, shared codes, and language and centrality) into position can be rewarding for the vendors and marketers in order to boost users’ IM usage. The test results of this study suggest that IM usage is indirectly affected by social support via the mediation of different social capital dimensions – that is, low IM usage is likely attributed to a lack of commitment, shared codes and language, and centrality, which may be prompted by weak social support. This finding implies that vendors or marketers who want to promote their online product or service should establish supportive communities in which online individuals can easily obtain online social support. It is important that online promotion or incentives, such as virtual time dollars or gift vouchers that positively catalyze individuals’ social support for online others, may be provided. In the long run, both expressive and instrumental support can become reciprocal and expanded, eventually boosting IM usage. Given that centrality is one of the most influential mediators for motivating users’ IM usage, marketers or corporate managers can make good use of this factor as a checkpoint to periodically assess both users’ social support and their IM usage. The tests results of this study reveal that centrality can be a powerful role that significantly overwhelms other social capital dimensions. This finding is understandable, because most users in a modern society become heavily dependent on IM in their daily life, resulting in a significant role of centrality between social support and IM usage. Marketers should invent daily life activities (e.g., e-charity, e-group improvisation, or e-group creation) to enhance the opportunity for users to perform social support, strengthening their centrality and subsequent IM usage. Marketers can also invent online solutions that link people’s daily events to online systems. For instance, IM users may be regularly reminded of providing social support to their friends (e.g., sending encouragement e-cards) so that their perceived centrality and IM usage are strengthened. This study collectively recommends that those marketers or managers who want to aggrandize users’ IM usage can place emphasis on social support and the significant social capital dimensions empirically confirmed herein. The marketers or managers should learn that IM usage can be substantially discouraged if social support is ignored. A major limitation of this study is the possibility of a common method bias due to a single questionnaire applied to measure all constructs, and this possibility could inflate the strength of the hypothesized relationships among these constructs. Researchers may apply different instruments rather than only a single set of questionnaires to obtain their data in the future. Another limitation is the cross-sectional survey employed in this study. The development of social capital leading to its outcomes, such as IM usage and knowledge sharing, is an ongoing phenomenon (e.g., Chiu et al. 2006), and IM usage may generate some feedback to social capital in the long run. This study’s social capital constructs were measured at a static point rather than as they were developing, hence losing some time richness of explanation (Chiu et al. 2006). Thus, future longitudinal research may complementarily support the findings of this study. Collectively, the model proposed and validated herein could benefit by further testing on the basis of a longitudinal survey. Future researchers can also improve the above shortcomings by observing the subjects’ IM usage behavior over time so that genuine associations among research constructs in a virtual world can be transparently revealed. This study also suggests that an issue which future research should address is whether access to and participation in online communities perpetuate gender, age, and racial inequalities. Lastly, given that using IM is much cheaper than using a traditional phone or a mobile phone, the costs may be an important driver for users to employ such Internet-based communication tools (e.g., mobile instant messaging), which could be taken into account in future research.