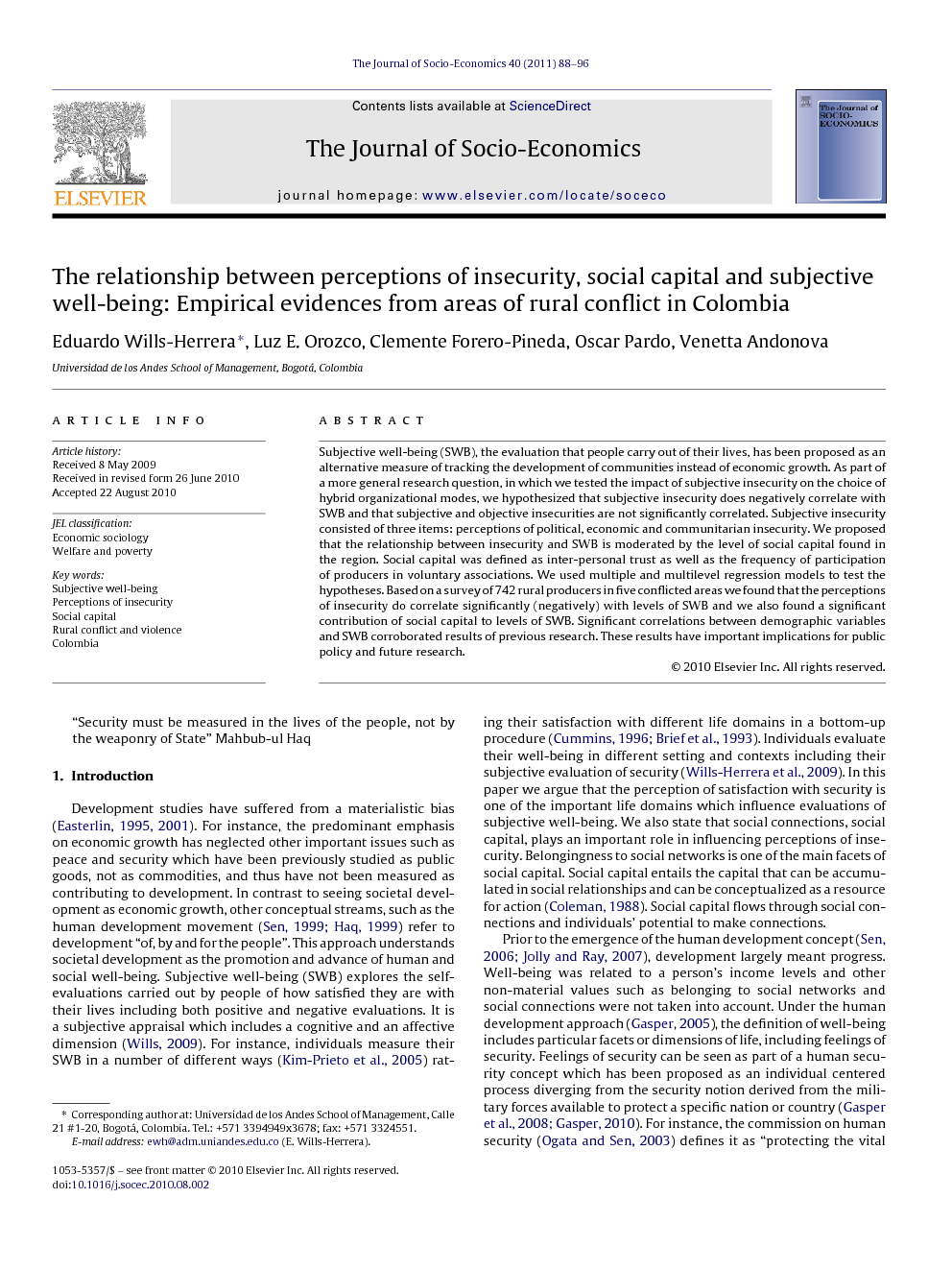 Subjective well-being (SWB), the evaluation that people carry out of their lives, has been proposed as an alternative measure of tracking the development of communities instead of economic growth. As part of a more general research question, in which we tested the impact of subjective insecurity on the choice of hybrid organizational modes, we hypothesized that subjective insecurity does negatively correlate with SWB and that subjective and objective insecurities are not significantly correlated. Subjective insecurity consisted of three items: perceptions of political, economic and communitarian insecurity. We proposed that the relationship between insecurity and SWB is moderated by the level of social capital found in the region. Social capital was defined as inter-personal trust as well as the frequency of participation of producers in voluntary associations. We used multiple and multilevel regression models to test the hypotheses. Based on a survey of 742 rural producers in five conflicted areas we found that the perceptions of insecurity do correlate significantly (negatively) with levels of SWB and we also found a significant contribution of social capital to levels of SWB. Significant correlations between demographic variables and SWB corroborated results of previous research. These results have important implications for public policy and future research.

Development studies have suffered from a materialistic bias (Easterlin, 1995 and Easterlin, 2001). For instance, the predominant emphasis on economic growth has neglected other important issues such as peace and security which have been previously studied as public goods, not as commodities, and thus have not been measured as contributing to development. In contrast to seeing societal development as economic growth, other conceptual streams, such as the human development movement (Sen, 1999 and Haq, 1999) refer to development “of, by and for the people”. This approach understands societal development as the promotion and advance of human and social well-being. Subjective well-being (SWB) explores the self-evaluations carried out by people of how satisfied they are with their lives including both positive and negative evaluations. It is a subjective appraisal which includes a cognitive and an affective dimension (Wills, 2009). For instance, individuals measure their SWB in a number of different ways (Kim-Prieto et al., 2005) rating their satisfaction with different life domains in a bottom-up procedure (Cummins, 1996 and Brief et al., 1993). Individuals evaluate their well-being in different setting and contexts including their subjective evaluation of security (Wills-Herrera et al., 2009). In this paper we argue that the perception of satisfaction with security is one of the important life domains which influence evaluations of subjective well-being. We also state that social connections, social capital, plays an important role in influencing perceptions of insecurity. Belongingness to social networks is one of the main facets of social capital. Social capital entails the capital that can be accumulated in social relationships and can be conceptualized as a resource for action (Coleman, 1988). Social capital flows through social connections and individuals’ potential to make connections. Prior to the emergence of the human development concept (Sen, 2006 and Jolly and Ray, 2007), development largely meant progress. Well-being was related to a person's income levels and other non-material values such as belonging to social networks and social connections were not taken into account. Under the human development approach (Gasper, 2005), the definition of well-being includes particular facets or dimensions of life, including feelings of security. Feelings of security can be seen as part of a human security concept which has been proposed as an individual centered process diverging from the security notion derived from the military forces available to protect a specific nation or country (Gasper et al., 2008 and Gasper, 2010). For instance, the commission on human security (Ogata and Sen, 2003) defines it as “protecting the vital core of all humans’ lives in ways that enhance human freedoms and human fulfillment”. So, human security is not limited to the negative dimension of the absence of violent conflict but includes safeguarding opportunities for people to build their strengths and aspirations. We distinguish insecurity as the opposite variable of security. It is a people-centered and multi-dimensional concept. We explore this concept in rural settings of conflictive Colombia where political and social conflict has pervaded the economic activity over the last 50 years. We hypothesize that subjective insecurity is a different variable from objective facts of violent conflict, and state that subjective perception of insecurity is negatively correlated with an individual's well-being. We propose that social capital as personal connections and a sense of belonging to social networks moderates the relationship between subjective insecurity and subjective well-being. Thus: H1. Perceptions of security are a different construct than objective indicators of insecurity and both constructs are poorly correlated. H2. SWB is negatively influenced by levels of perceived insecurity (personal, community and political). H3. Social capital, as membership of voluntary associations, and trust and reciprocity is positively associated with subjective well-being and it moderates the relationship between perceptions of insecurity and SWB. H4. SWB is significantly different for women as compared to men, to highly educated individuals as compared to less educated individuals, to married couples as compared to other marital status, and is positively associated with income. This research is important because it tests with empirical evidence from a conflictive environment, how subjective insecurity as a component of human security influences SWB and how such relationship is moderated by social capital. It is also important because it states that people construct safeguards against violence and conflict through participation in community networks and activities (social capital) which generates feelings of protection for the individual. Results of this relationship have both theoretical and practical implications for public policy.