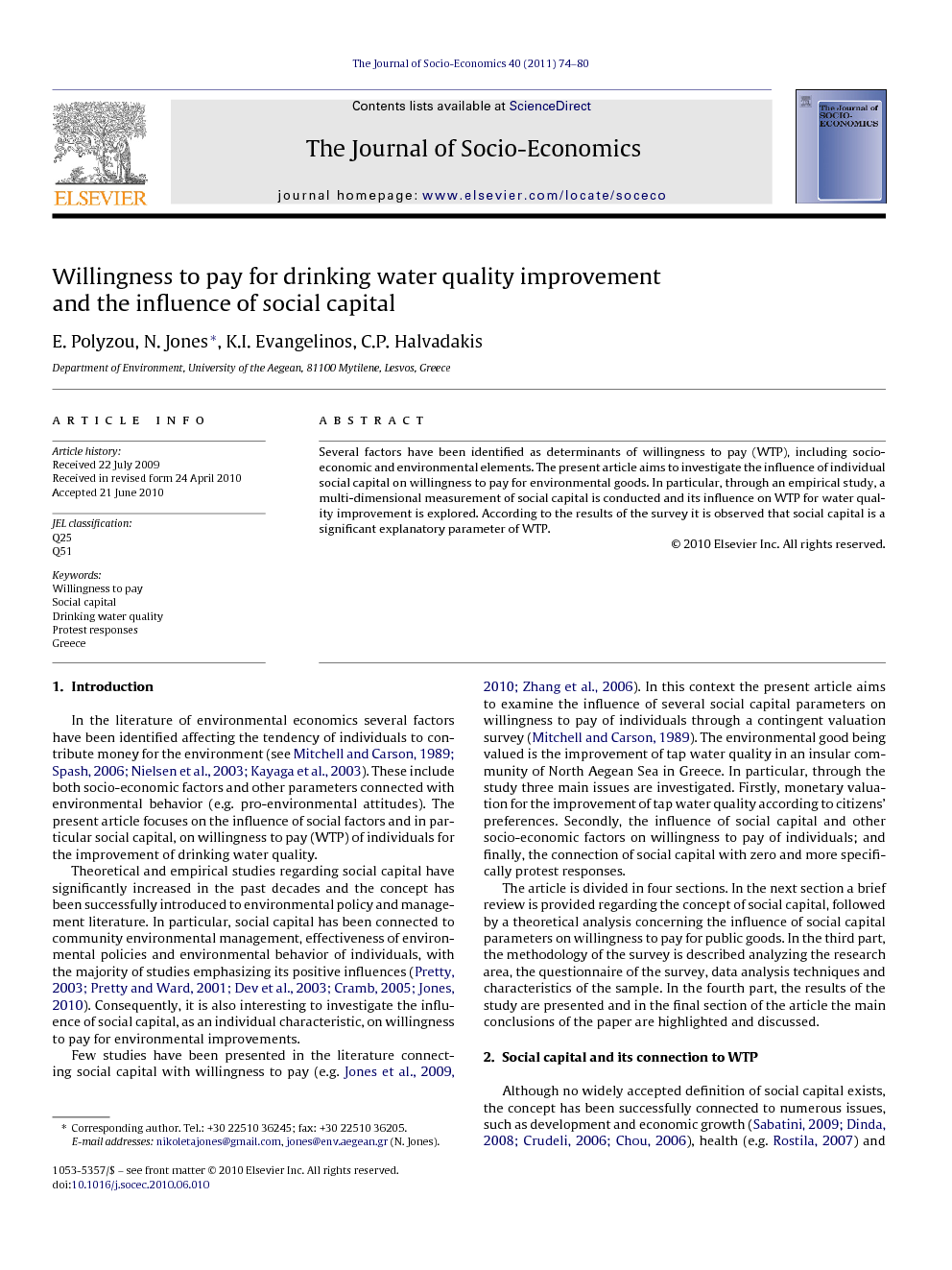 Several factors have been identified as determinants of willingness to pay (WTP), including socio-economic and environmental elements. The present article aims to investigate the influence of individual social capital on willingness to pay for environmental goods. In particular, through an empirical study, a multi-dimensional measurement of social capital is conducted and its influence on WTP for water quality improvement is explored. According to the results of the survey it is observed that social capital is a significant explanatory parameter of WTP.

The present study aimed to estimate citizens’ monetary valuation for the improvement of tap water quality and investigate the influence of social capital parameters on this valuation. According to the empirical results, citizens are willing to pay, on average, 10.38 € every 2 months for the improvement of drinking water quality. The payment vehicle utilized in the study was the water bill. The monetary valuation is relatively high when compared to the current municipal water tax and it is close to results of other national and international studies (e.g. Genius et al., 2008 and Cho et al., 2005). Several parameters were investigated as explanatory for individuals’ monetary valuation. Specifically, income is a significant explanatory variable revealing that citizens with a higher income present also higher valuations for the improvement of drinking water quality. It is also interesting to observe that the frequency of drinking tab water does not influence WTP. This issue should be further explored through future research as individuals who avoid drinking tab water have additional expenditures do to the purchase of mineral water. Regarding the influence of social capital as a total stock, through the regression models it was shown to be an important parameter explaining WTP of individuals. Thus, citizens with higher levels of social capital also state higher amounts. This assumption may be explained by the theoretical analysis outlined in the second part of the article indicating the possible connections of social capital parameters with WTP and valuation of environmental goods. The total social capital indicator is useful because social capital variables present significant interconnection between them. In addition, when investigating the influence of specific social capital parameters, institutional trust and social norms remain the most significant factors influencing WTP. The level of institutional trust is connected with WTP as higher levels of trust indicate also a tendency to regard governmental management as efficient. Consequently, citizens are more willing to accept changes proposed by this institution and present higher valuations for the improvement of water quality. In addition, the tendency of an individual to comply with social norms and protect the common good is also influencing his/her tendency to pay for the environment. Despite the above assumptions an important issue is that only 40% of the sample is willing to pay any amount. This result is in contrast with the fact that almost half of the population currently avoids to drink tap water. Nevertheless, high levels of reluctance have been presented in previous studies conducted in Greece and Mytilene in particular (e.g. Jones et al., 2008a and Menegaki et al., 2007). The justification provided by respondents for being reluctant to pay is based on several issues. Firstly, they regard that they already pay enough taxes which may also be combined with the general perception in Greece that state tax management is inefficient. A second reason highly linked with the above, is the protest for the management actor included in the payment vehicle. The reluctance of citizens derives from the fact that they regard governmental management as inefficient and is also combined with the low levels of institutional trust in Greece (Jones et al., 2008b). Nevertheless, management of environmental goods in Greece is mainly the responsibility of the state and the utilization of a different actor in the hypothetical scenario would possibly affect its plausibility. The third reason explaining citizens’ unwillingness to pay is in disagreement to the previous justifications. This refers to the perception that the state is responsible for the management of public goods. Thus, although citizens tend to distrust the state, they regard at the same time that it is the responsibility of the state to take such initiatives forward. This perception may be explained by the socio-political characteristics in Greece where a strong statism culture is accompanied with low levels of awareness and participation of citizens in actions for the resolution of environmental problems (Tsoukalas, 1995, Lekakis, 1995 and Jones et al., 2008b). Furthermore, through the results of the study it is observed that citizens with higher ‘stocks’ of social capital are more positive in contributing money. Although no statistically significant relationships were observed, higher means were noted among individuals who were willing to pay for the improvement of drinking water. This is may be connected with the fact that social capital parameters also measure the level of distrust towards the state. Finally, although several issues were investigated through this survey, some limitations exist. Firstly, there was no reference to different types of social capital (e.g. bonding, bridging and linking, see Sabatini, 2009) or to ‘good’ and ‘bad’ aspects of social capital. Secondly, there were some limitations regarding social networks where usually both formal and informal connections are measured (e.g. Putnam, 2000 and Sabatini, 2009). Despite the above limitations, the present paper aimed to investigate the influence of certain social capital parameters and total ‘stocks’ of individual social capital on willingness to pay for environmental goods. The results of the study are important for future research exploring the economic valuation of public goods and the resolution of biases in CVM studies, such as protest responses. In particular, the inclusion and measurement of social capital parameters in CVM studies will assist researchers to improve the hypothetical scenarios utilized and to further understand the reasons leading to citizens’ monetary valuation.