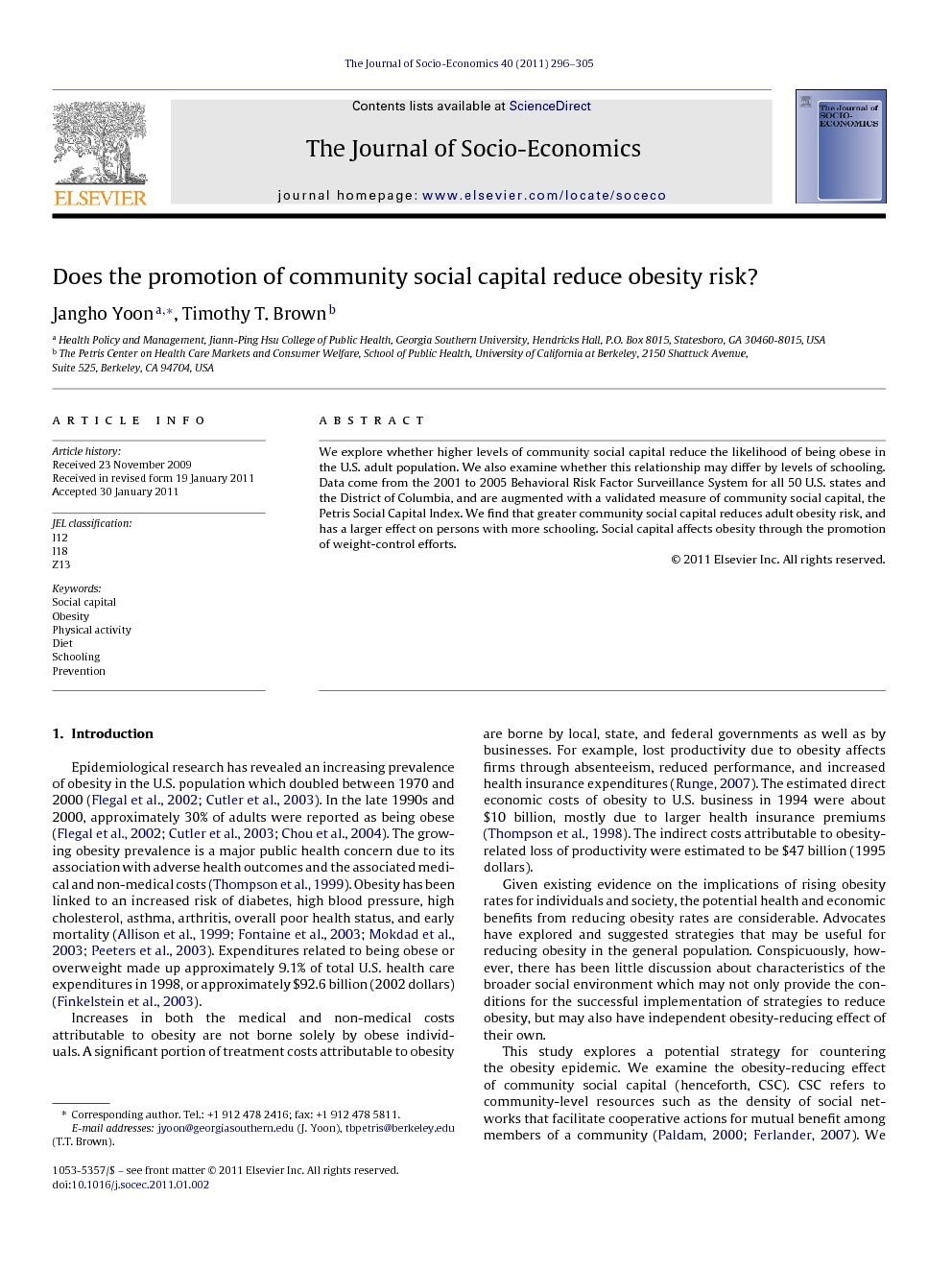 Epidemiological research has revealed an increasing prevalence of obesity in the U.S. population which doubled between 1970 and 2000 (Flegal et al., 2002 and Cutler et al., 2003). In the late 1990s and 2000, approximately 30% of adults were reported as being obese (Flegal et al., 2002, Cutler et al., 2003 and Chou et al., 2004). The growing obesity prevalence is a major public health concern due to its association with adverse health outcomes and the associated medical and non-medical costs (Thompson et al., 1999). Obesity has been linked to an increased risk of diabetes, high blood pressure, high cholesterol, asthma, arthritis, overall poor health status, and early mortality (Allison et al., 1999, Fontaine et al., 2003, Mokdad et al., 2003 and Peeters et al., 2003). Expenditures related to being obese or overweight made up approximately 9.1% of total U.S. health care expenditures in 1998, or approximately $92.6 billion (2002 dollars) (Finkelstein et al., 2003). Increases in both the medical and non-medical costs attributable to obesity are not borne solely by obese individuals. A significant portion of treatment costs attributable to obesity are borne by local, state, and federal governments as well as by businesses. For example, lost productivity due to obesity affects firms through absenteeism, reduced performance, and increased health insurance expenditures (Runge, 2007). The estimated direct economic costs of obesity to U.S. business in 1994 were about $10 billion, mostly due to larger health insurance premiums (Thompson et al., 1998). The indirect costs attributable to obesity-related loss of productivity were estimated to be $47 billion (1995 dollars). Given existing evidence on the implications of rising obesity rates for individuals and society, the potential health and economic benefits from reducing obesity rates are considerable. Advocates have explored and suggested strategies that may be useful for reducing obesity in the general population. Conspicuously, however, there has been little discussion about characteristics of the broader social environment which may not only provide the conditions for the successful implementation of strategies to reduce obesity, but may also have independent obesity-reducing effect of their own. This study explores a potential strategy for countering the obesity epidemic. We examine the obesity-reducing effect of community social capital (henceforth, CSC). CSC refers to community-level resources such as the density of social networks that facilitate cooperative actions for mutual benefit among members of a community (Paldam, 2000 and Ferlander, 2007). We hypothesize that increases in CSC lead to behavioral changes such as reduced caloric intake and increased exercise by, for example, facilitating flows of health-related information, and in turn reduce an individual's likelihood of being obese. We also examine the effect of schooling as an important individual-level factor that may modify the potential effect of CSC on individual behavior. Schooling may enhance the effectiveness of CSC through the efficient production of health and the facilitation of social engagement (Grossman, 1972, Kenkel, 1991 and Helliwell and Putnam, 1999). We thus hypothesize that CSC has a larger obesity-reducing effect for persons with higher levels of schooling.

The findings of this study suggest that the promotion of CSC may lower the obesity risk among U.S. adults, facilitating efforts to control body weight through reducing calorie/fat consumed and increasing physical activity. The magnitude of these effects appears large. Therefore, the promotion of CSC could serve as a potentially effective public policy to combat the obesity epidemic. However, the potentially promising result on the effect of CSC is not homogeneous across different levels of schooling. CSC appears to disproportionately benefit persons with higher levels of schooling in terms of reduced obesity though proper diet and the promotion of physical activity. Considering that both CSC and schooling have been consistently linked to various positive health outcomes, now including obesity, a challenge for future research in this field is to empirically explore the mechanism through which CSC heterogeneously affects obesity risk, health-related behavior, and other health outcomes across different levels of schooling. Knowledge about this mechanism will help produce more effective public health policy and thus any implementation of policy regarding social capital and obesity should be delayed until this mechanism is understood. We draw attention to several limitations of this paper. Although we measure CSC at the county level, CSC at different levels such as municipalities and states may reflect the influence of different social processes (Lochner et al., 1999). It is reasonable that future research examines the relationship between CSC and obesity at different geographical levels. There may be omitted individuals-level factors that affect an individual's likelihood of being obese such as generic endowment and time preference. Nevertheless, our measure of CSC represents the macro-level social capital and thus should not be substantially affected by unobserved individual-level factors. We have examined up to the two-year time frame that links CSC to reduced obesity risk. However, the effect of CSC on obesity risk may require a longer time to be fully in effect because CSC may take a longer time to have an impact on an individual's behavior. Our findings partly support this scenario in that the obesity-reduction effect of CSC appears larger when lagged by two years than contemporaneously. Similarly, the same pattern has been identified for physical activity and calorie/fat intake. Therefore, the long-term effect of CSC on obesity and weight-control efforts may be larger than what we report here. In the future, long-term follow-ups of persons exposed to different levels of CSC, may fill gaps in our understanding on the full effect of CSC. This study is limited in that we have only aimed to isolate the relationship between CSC and obesity. As aforementioned, the promotion of CSC may also assist with supportive environments other strategies aimed to reduce obesity. Therefore, the question of whether social capital has an additive or multiplicative effect on other strategies to reduce obesity is an important question for future research.