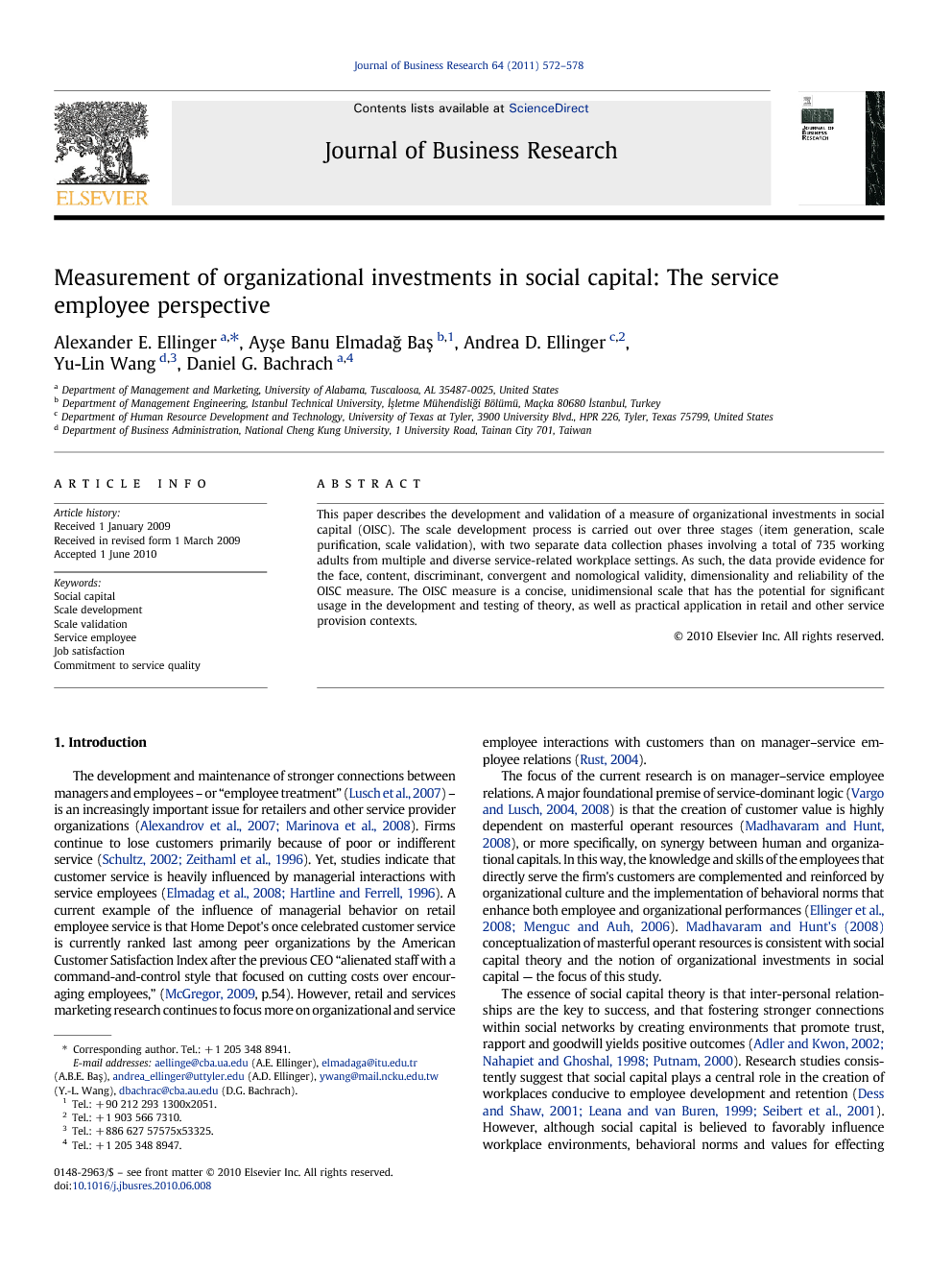 This paper describes the development and validation of a measure of organizational investments in social capital (OISC). The scale development process is carried out over three stages (item generation, scale purification, scale validation), with two separate data collection phases involving a total of 735 working adults from multiple and diverse service-related workplace settings. As such, the data provide evidence for the face, content, discriminant, convergent and nomological validity, dimensionality and reliability of the OISC measure. The OISC measure is a concise, unidimensional scale that has the potential for significant usage in the development and testing of theory, as well as practical application in retail and other service provision contexts.

The development and maintenance of stronger connections between managers and employees – or “employee treatment” (Lusch et al., 2007) – is an increasingly important issue for retailers and other service provider organizations (Alexandrov et al., 2007 and Marinova et al., 2008). Firms continue to lose customers primarily because of poor or indifferent service (Schultz, 2002 and Zeithaml et al., 1996). Yet, studies indicate that customer service is heavily influenced by managerial interactions with service employees (Elmadag et al., 2008 and Hartline and Ferrell, 1996). A current example of the influence of managerial behavior on retail employee service is that Home Depot's once celebrated customer service is currently ranked last among peer organizations by the American Customer Satisfaction Index after the previous CEO “alienated staff with a command-and-control style that focused on cutting costs over encouraging employees,” (McGregor, 2009, p.54). However, retail and services marketing research continues to focus more on organizational and service employee interactions with customers than on manager–service employee relations (Rust, 2004). The focus of the current research is on manager–service employee relations. A major foundational premise of service-dominant logic (Vargo and Lusch, 2004 and Vargo and Lusch, 2008) is that the creation of customer value is highly dependent on masterful operant resources (Madhavaram and Hunt, 2008), or more specifically, on synergy between human and organizational capitals. In this way, the knowledge and skills of the employees that directly serve the firm's customers are complemented and reinforced by organizational culture and the implementation of behavioral norms that enhance both employee and organizational performances (Ellinger et al., 2008 and Menguc and Auh, 2006). Madhavaram and Hunt's (2008) conceptualization of masterful operant resources is consistent with social capital theory and the notion of organizational investments in social capital — the focus of this study. The essence of social capital theory is that inter-personal relationships are the key to success, and that fostering stronger connections within social networks by creating environments that promote trust, rapport and goodwill yields positive outcomes (Adler and Kwon, 2002, Nahapiet and Ghoshal, 1998 and Putnam, 2000). Research studies consistently suggest that social capital plays a central role in the creation of workplaces conducive to employee development and retention (Dess and Shaw, 2001, Leana and van Buren, 1999 and Seibert et al., 2001). However, although social capital is believed to favorably influence workplace environments, behavioral norms and values for effecting such transformations require additional examination and measurement (Merlo et al., 2006 and Oh et al., 2006). As stated by Prusak and Cohen (2001, p. 87), “knowing that healthy relationships help an organization thrive is one thing; making those relationships happen is quite another.” In their conceptual representation of organizational investments in social capital, Cohen and Prusak (2001, p. 3) describe social capital as the “relationships that make organizations work effectively.” The authors contend that every managerial decision and action represents an opportunity for social capital investment or loss, and that investing in social capital by promoting trustworthiness, a sense of community, and stronger connections between managers and employees benefits firms by yielding returns similar to other, more tangible, forms of capital. Accordingly, the notion of organizational investments in social capital represents a relevant and potentially fruitful conduit for the development and maintenance of productive relationships between managers and employees in retail and other service provider industries. On this basis, building on Cohen and Prusak's (2001) conceptual work, a new measure identified as organizational investments in social capital (OISC) is proposed. This study provides a brief discussion of social capital as an organizational resource, summarizes Cohen and Prusak's (2001) conceptualization of OISC, and then reports the results of the development and validation of a quantitative measure that extends Cohen and Prusak's earlier conceptual work. The nomological validity of the new OISC scale is also assessed. Correlations between employees' perceptions of their organizations' investments in social capital and critical work-related outcome variables are examined. Finally, suggestions for applying the new OISC measure in retail and other service provision contexts are offered.

In accordance with the research objectives of this study, the development and validation process undertaken for the OISC measure result in a parsimonious, unidimensional scale that, over a series of separate studies, demonstrate acceptable levels of reliability, convergent and discriminant validity. An additional strength of the proposed measure is that it is developed using disparate samples of working adult respondents in multiple service industries. Since respondents' demographic characteristics vary considerably in terms of gender, age, job description, and industry, the scale should have relatively broad, generalized applicability. The brevity of the OISC scale is also potentially useful since it can easily be employed as an efficient means of assessing organizational investments in social capital in future empirical studies. Several limitations and suggestions for future research merit discussion. First, additional examinations are required to further replicate the results obtained in this study and to evaluate statistical norms for the new measure. Furthermore, assessments such as test–retest reliability should be conducted in future studies to assess the stability of employees' perceptions of their organizations' investments in social capital over time. Finally, it is conceivable that employees may be unwilling to volunteer negative perceptions of their firms. Therefore, future research should evaluate the extent that social desirability biases may affect employees' reports of their organizations' investments in social capital. If social desirability turns out to be a problem, it may need to be controlled in future studies. Beyond additional tests of the measure itself, there are several intriguing avenues for future research that could be conducted using the new OISC measure. From a theoretical perspective, researchers might examine the antecedents of organizational investments in social capital as well as the evolution of, or stages in, the “investment” process. Further, circumstances where organizational investments in social capital are successful and circumstances where they are not should be identified to develop a better understanding of when to invest in social capital, and when such resource commitments may not be worthwhile. Future research might also examine the consistency between employees' and managers' perceptions of their organizations' investments in social capital. The literature suggests that congruence between employee and organizational perceptions and values may lead to a wide range of positive work-related outcomes (e.g., Ostroff et al., 2005). Correspondent organizational and employee perceptions generate clearer roles and expectations that arise from common aspects of cognitive processing, resulting in less role ambiguity and friction and higher levels of job satisfaction and commitment to the firm (Fisher and Gitelson, 1983). In contrast, perceptual inconsistencies may have the opposite effect, with disparate evaluations of internal or situational conditions resulting in employees failing to achieve goals or experiencing job-related dissatisfaction and distress (Bagozzi, 1992). Thus, from a more applied perspective, the new OISC measure may be insightful to retailers and other service provider organizations that are currently spending millions of dollars on developmental approaches to improve customer service. The OISC can be used as a diagnostic instrument for identifying potential employee relations problems. Discrepancies between employee and managerial perceptions would serve to highlight problem areas and opportunities for improvement. For example, if store employees rate their organizations low on the OISC scale, retailers could take actions to encourage and increase behaviors that represent organizational investments in social capital. Such actions might include additional training programs for store managers to help them develop healthier relationships with store employees, store management reward systems that are at least partly contingent on employee evaluations and feedback, and the provision of more opportunities for managers and store employees to dialogue and spend quality time together.