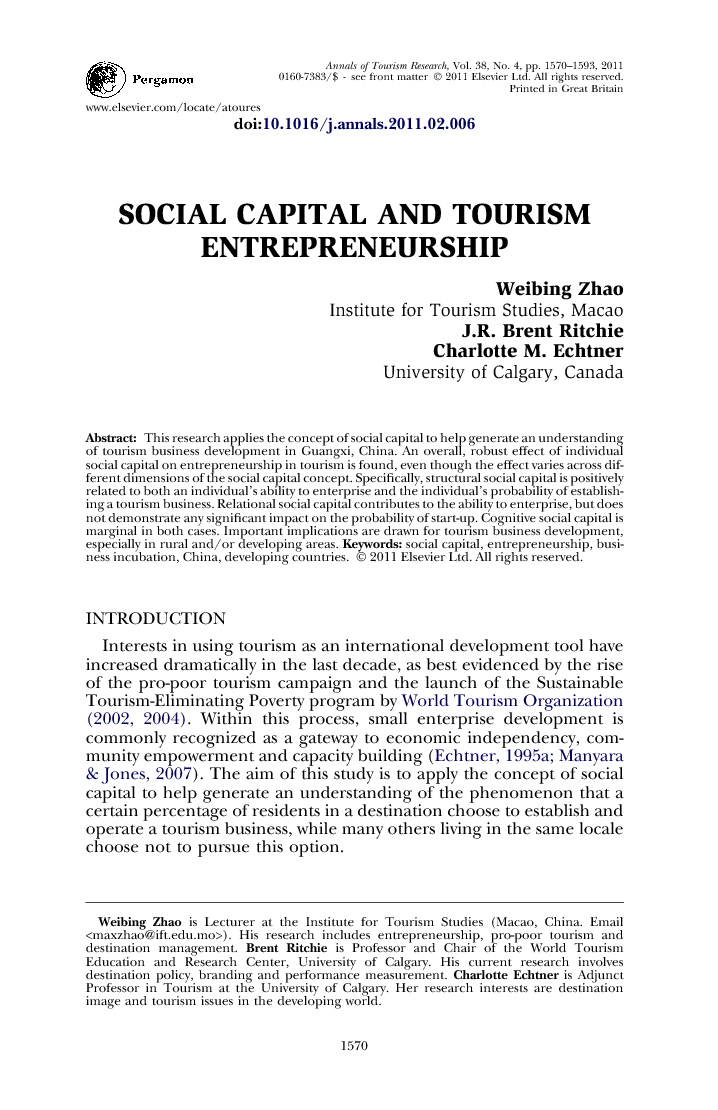 Interests in using tourism as an international development tool have increased dramatically in the last decade, as best evidenced by the rise of the pro-poor tourism campaign and the launch of the Sustainable Tourism-Eliminating Poverty program by World Tourism Organization, 2002 and World Tourism Organization, 2004. Within this process, small enterprise development is commonly recognized as a gateway to economic independency, community empowerment and capacity building (Echtner, 1995a and Manyara and Jones, 2007). The aim of this study is to apply the concept of social capital to help generate an understanding of the phenomenon that a certain percentage of residents in a destination choose to establish and operate a tourism business, while many others living in the same locale choose not to pursue this option. Past development experience has indicated that addressing only the vocational training or financing needs of the region often fails to reach and make a measurable impact on the poorest, in that poverty is by nature entrenched in the social fabric of local communities (Fairley, 1998). A social capital perspective, which assumes that resources embedded in one’s social relationships can be mobilized to support entrepreneurship (Davidsson & Honig, 2003), is expected to lead to a more complete explanation of the phenomenon, and reveal additional insights for successful enterprise development in the context of developing countries.

This study has applied the concept of social capital to help generate an understanding of small tourism business development in Guangxi, China. An overall, robust effect of individual social capital on entrepreneurship in the rural tourism sector is found, even though the effect varies across different dimensions of the social capital concept. Specifically, structural social capital is positively related to both an individual’s ability to enterprise and the individual’s probability of establishing a tourism business. Relational social capital contributes to the ability to enterprise, but does not demonstrate any significant impact on the probability of start-up. The cognitive dimension of social capital is marginal in both cases. Despite the noteworthy effect of social capital, this study indicates that human capital is the most influential factor for entrepreneurship in tourism. Educational attainment, previous management experience and tourism/hospitality experience are all positively associated with an individual’s ability to enterprise. In addition, they all are important predictors of a tourism business start-up. This study enhances the current poor understanding of the differences between entrepreneurs and nonentrepreneurs in rural tourism development. The systematic comparison of the two groups of research subjects has not been attempted in previous tourism literature. The comparison has produced a more complete explanation of why a certain percentage of residents in a rural destination choose to establish and operate a tourism business, while many others living in the same place do not. In addition, the absence of theoretical constructs has to a great extent determined the descriptive nature of current research on entrepreneurship and small/family tourism businesses. Drawing upon a broad range of literature, this study has carefully adapted a number of key variables to the context of tourism. In particular, by treating social capital as the focus of investigation, it adds value to an emerging, but still quite fragmented body of literature employing the concept to examine and help understand tourism phenomena. Furthermore, entrepreneurship research in general has been criticized for paying insufficient attention to developing countries and poor populations (Zhao & Getz, 2008). Dominant reliance on western realities may not only cause theoretical incompleteness, but in the practical perspective also provides few prescriptions for business development in the vast developing world (Peredo & Chrisman, 2006). China is the largest developing country in the world, and Guangxi is one of the least developed provinces in China. The evidence revealed in this study is thus a valuable addition to the mainstream body of knowledge in entrepreneurship, providing a more balanced view about entrepreneurial activities around the world. In addition, extant entrepreneurship literature has been overwhelmingly devoted to examining manufacturing and technology industries rather than those based on services (Yang & Wall, 2008). As such, by examining an important service sector, this study has contributed both to entrepreneurship and tourism theory. The insights gained from this study are instrumental for the planning and development of rural tourism businesses, particularly in developing areas. A great number of contemporary microenterprise development programs place excessive emphasis on providing consulting services. Although such an approach can effectively reach and help those in immediate need, it mainly works on a case-by-case basis and fails to tap the potential of a larger population for entrepreneurship. By revealing much information on the constraints of the general public with respect to entrepreneurship in tourism, this study can help governments and development agencies set up wider ranging and proactive programs. For example, this study has identified risk aversion as one of the major factors accounting for non-entrepreneurship in rural Guangxi. Actions thus can be taken to alleviate people’s fear of business failure and stimulate optimistic anticipation. In addition, traditional assistance programs commonly concentrate on addressing a single major obstacle to entrepreneurship in a regional setting. The effectiveness of these single-focus programs has proved less desirable because the constraints or difficulties facing an entrepreneur are often multi-faceted. This study has proposed a composite approach to tourism business development, and has examined a variety of pertinent variables. It is suggested that each variable demonstrating significant effects in the statistical comparisons, particularly those entering the logistic regression equation, should be paid appropriate attention to. This study also provides some initial but important clues as to the optimal allocation of resources. The logistic regression analysis has identified the variables that best predict the probability of entrepreneurship in the tourism sector of rural Guangxi. In enterprise development, these variables should be given priorities, especially those with the largest coefficients. Notably, given the central importance of human capital, it is justifiable to invest the most resources in this factor. Improving the formal education of a region is a gradual process, so its short-term effect could be very marginal. A more productive approach is to provide vocational training programs to enhance the management skills and tourism knowledge of those who are interested in establishing a tourism business. In the long run, a three pronged approach to tourism education as advocated by Echtner (1995b) would be a desirable end goal in developing countries. As for social capital, it is revealed that knowing other entrepreneurs or people with tourism/hospitality work experience could dramatically increase the probability of someone pursuing business opportunities in local tourism development. Governments and development agencies can consider organizing more networking events and inviting successful entrepreneurs to share their business experience with the general public.