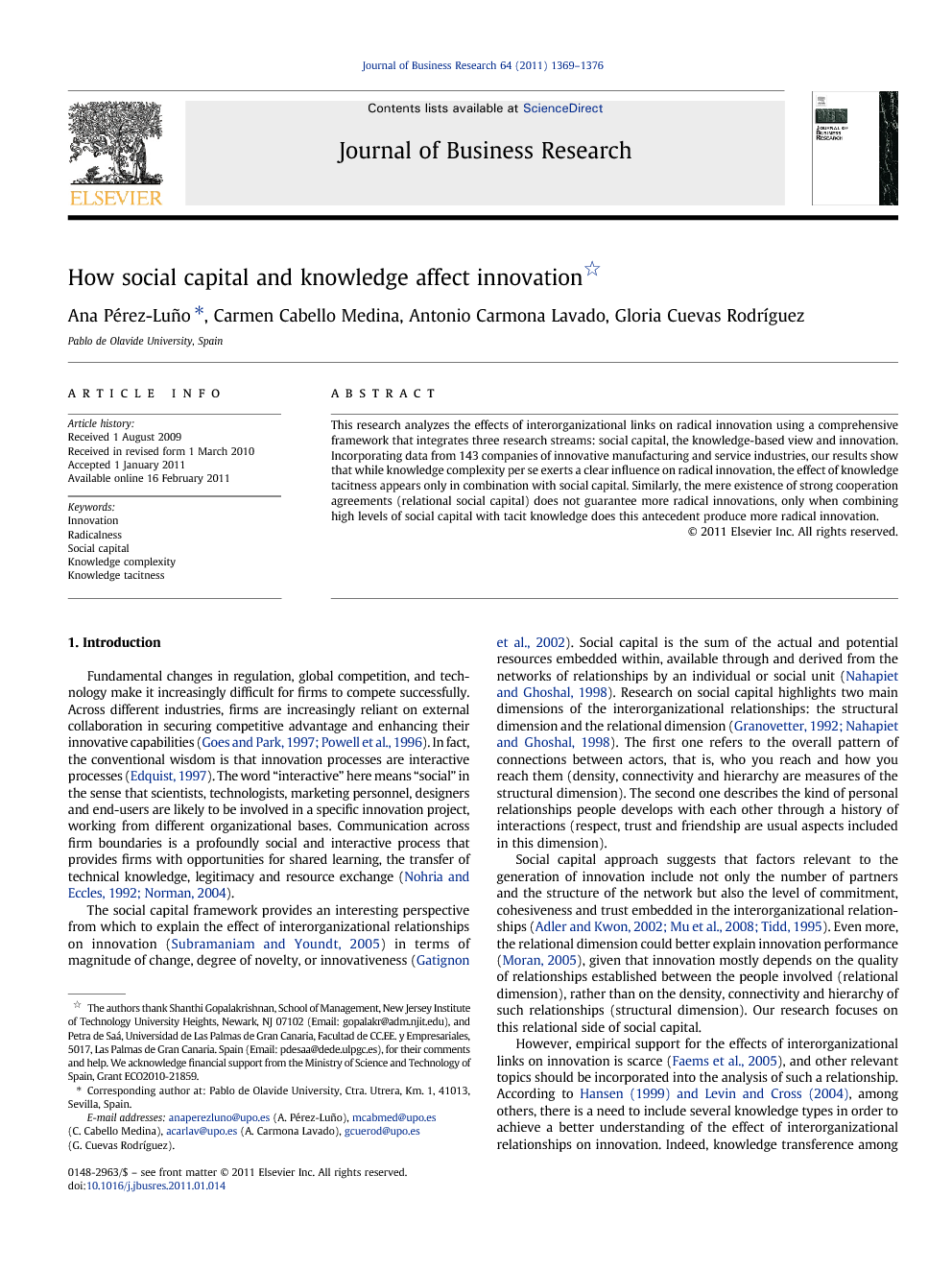 Fundamental changes in regulation, global competition, and technology make it increasingly difficult for firms to compete successfully. Across different industries, firms are increasingly reliant on external collaboration in securing competitive advantage and enhancing their innovative capabilities (Goes and Park, 1997 and Powell et al., 1996). In fact, the conventional wisdom is that innovation processes are interactive processes (Edquist, 1997). The word “interactive” here means “social” in the sense that scientists, technologists, marketing personnel, designers and end-users are likely to be involved in a specific innovation project, working from different organizational bases. Communication across firm boundaries is a profoundly social and interactive process that provides firms with opportunities for shared learning, the transfer of technical knowledge, legitimacy and resource exchange (Nohria and Eccles, 1992 and Norman, 2004). The social capital framework provides an interesting perspective from which to explain the effect of interorganizational relationships on innovation (Subramaniam and Youndt, 2005) in terms of magnitude of change, degree of novelty, or innovativeness (Gatignon et al., 2002). Social capital is the sum of the actual and potential resources embedded within, available through and derived from the networks of relationships by an individual or social unit (Nahapiet and Ghoshal, 1998). Research on social capital highlights two main dimensions of the interorganizational relationships: the structural dimension and the relational dimension (Granoveter, 1992 and Nahapiet and Ghoshal, 1998). The first one refers to the overall pattern of connections between actors, that is, who you reach and how you reach them (density, connectivity and hierarchy are measures of the structural dimension). The second one describes the kind of personal relationships people develops with each other through a history of interactions (respect, trust and friendship are usual aspects included in this dimension). Social capital approach suggests that factors relevant to the generation of innovation include not only the number of partners and the structure of the network but also the level of commitment, cohesiveness and trust embedded in the interorganizational relationships (Adler and Kwon, 2002, Mu et al., 2008 and Tidd, 1995). Even more, the relational dimension could better explain innovation performance (Moran, 2005), given that innovation mostly depends on the quality of relationships established between the people involved (relational dimension), rather than on the density, connectivity and hierarchy of such relationships (structural dimension). Our research focuses on this relational side of social capital. However, empirical support for the effects of interorganizational links on innovation is scarce (Faems et al., 2005), and other relevant topics should be incorporated into the analysis of such a relationship. According to Hansen, 1999 and Levin and Cross, 2004, among others, there is a need to include several knowledge types in order to achieve a better understanding of the effect of interorganizational relationships on innovation. Indeed, knowledge transference among companies provides opportunities for mutual learning and interorganizational cooperation, which stimulate the creation of new knowledge and, at the same time, contribute to the organizational ability to innovate (Nielsen, 2005 and Tsai, 2001). In addition, the relational side of social capital is more important for innovation when knowledge is tacit and complex, and thus is sticky and difficult to spread (Szulanski, 1996). Tacit knowledge has a personal quality that makes its formalization and communication difficult (Nonaka, 1994). Complex knowledge has a high number of parameters needed to be defined (Pringle, 1951). The present paper discusses the way in which the effect of the type of knowledge (in terms of tacitness and complexity) on radical innovations will depend on the level of social capital. The following question is important. How can organizations combine their social capital and internal knowledge to increase radical innovation? To address this question, this paper includes three objectives. The paper analyzes the effect of external social capital on radical innovation, analyzes the influence of knowledge tacitness and complexity on radical innovation, and explores the moderating role of social capital in the relationship between knowledge (tacitness and complexity) and radical innovation. This paper makes several contributions to research. First, at least three separate bodies of literature – on social capital, innovation, and the knowledge-based view – have addressed aspects of these questions. However, researchers have rarely considered the connections between these bodies of literature, a point that is the principal focus of this paper. In this vein, the paper proposes and tests a theoretical model that links these streams. That is, we analyze both the independent and joint effect of social capital and knowledge-based view on radical innovations. Second, this research examines and explains the influence of the relational dimension of external social capital on radical innovation. This is important because, traditionally, the literature has analyzed the structural side of social capital. However, the relational side of social capital may exert a stronger effect on innovation (Moran, 2005). Third, whereas previous research analyzes knowledge tacitness as a broad construct that includes tacitness and complexity (e.g., Subramaniam and Venkatraman, 2001), our research conducts an individualized study of each of these types of knowledge with the aim of a better understanding of their different effects on radical innovation. Four, this article focuses on radical innovation rather than innovation in general. This is important because radical innovations offer greater product advantage and opportunities for differentiation (Calantone et al., 2006, Gatignon and Xuereb, 1997 and Kleinschmidt and Cooper, 1991), and has a positive effect on firm performance (Nijssen et al., 2006, Salomo et al., 2008 and Zhou et al., 2005). The paper proceeds as follows. The first section presents the theoretical background that led to the establishment of the hypotheses. The second section describes the empirical testing of such relationships. Last, the discussion includes findings and presents further conclusions, contributions, limitations and ideas for future research directions.