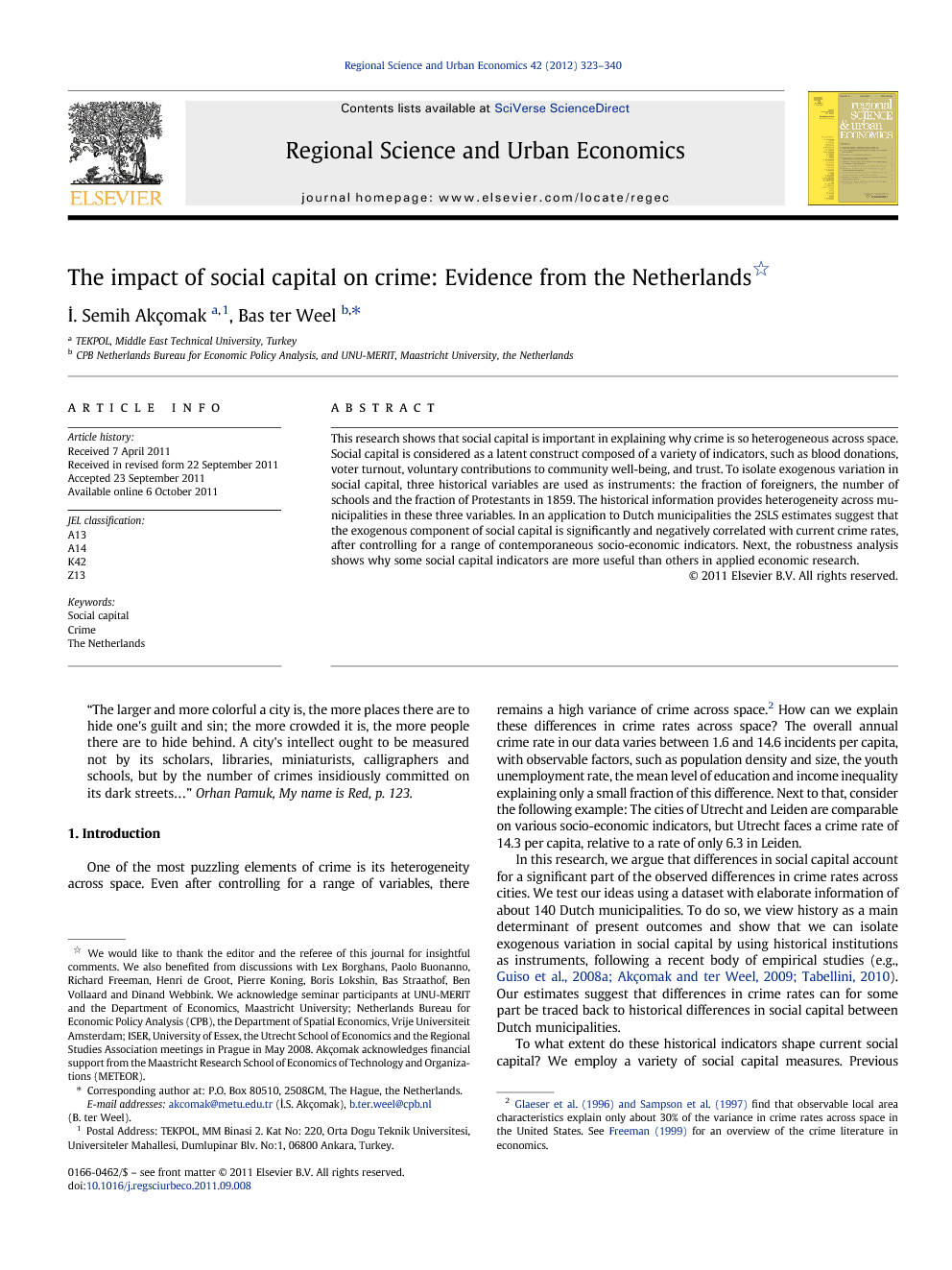 This research shows that social capital is important in explaining why crime is so heterogeneous across space. Social capital is considered as a latent construct composed of a variety of indicators, such as blood donations, voter turnout, voluntary contributions to community well-being, and trust. To isolate exogenous variation in social capital, three historical variables are used as instruments: the fraction of foreigners, the number of schools and the fraction of Protestants in 1859. The historical information provides heterogeneity across municipalities in these three variables. In an application to Dutch municipalities the 2SLS estimates suggest that the exogenous component of social capital is significantly and negatively correlated with current crime rates, after controlling for a range of contemporaneous socio-economic indicators. Next, the robustness analysis shows why some social capital indicators are more useful than others in applied economic research.

From a community governance perspective, social capital plays an important role in crime prevention by providing informal social control and support and due to network externalities. The presence of social capital provides community-oriented solutions to the crime problem and these solutions are important next to formal measures such as increasing expenditure on police or incarceration. Our findings are in line with Huck and Kosfeld (2007) who show that voluntary crime-watch programs can act as an effective tool for community crime prevention complementing other formal tools. This research contributes to the literature by trying to isolate the effect of social capital on crime rates. Our estimates for Dutch municipalities suggest that communities with higher levels of social capital have lower crime rates. We show that these estimates are robust and we have carefully examined the causality of this relationship. Generally, a one standard deviation increase in social capital reduces crime by roughly around 0.30 of a standard deviation. These estimates contribute to finding an explanation for why crime is so heterogeneous across space. We note that the empirical findings have limitations. Geography and spatial correlations may determine both social capital and crime. It might be easier to argue that crime levels in a municipality are affected by unemployment and income levels of neighboring municipalities. However, it is not straightforward to assume that this holds for the relationship between social capital and crime as well. We consider municipalities as the unit of analysis, which still have geographical boundaries. We assume that crime is mostly a local phenomenon and criminals have better knowledge about the opportunities in cities that they live in, compared to crime opportunities in neighboring cities. Moreover, ideally one should use panel data to infer causality from the data. Cross-sectional analysis has limitations in evaluating causality. Unfortunately, in our setting it is not possible to pursue panel analysis. This is because we do not have the data to do so and more importantly because social capital is a stock that does not change considerably from year to year, whereas variables such as inequality and unemployment do. Alternatively, we use an instrumental variable strategy to capture the exogenous variation in social capital. Our instruments pass over identification tests, however this is not a bullet proof that the instruments are not correlated with unobserved factors that might affect crime as well. Having used many socio-economic indicators as right-handside variables, it is hard to find good instruments that are legitimate in both statistical and economic sense. We use institutional development in the past to proxy for current levels of social capital. Hence, we treat social capital as a long-term phenomenon, which stock has been build during a long period of time. From a policy perspective, this makes our study difficult to apply because our measures of social capital cannot be changed rapidly but need long-term investment. On the positive side, we show that crime is higher in municipalities where more youth is present. Informal education in the early stages of the life cycle provided by the family and community control and support could act as an important mechanism to reduce youth crime and later on to build social networks. This is an area in which policy makers do have impact by means of preventing people to drop out of schools and by setting up schemes to stimulate youth to stay out of unemployment.