عنوان انگلیسی
See you on Facebook! A framework for analyzing the role of computer-mediated interaction in the evolution of social capital
دانلود فوری مقاله + سفارش ترجمه 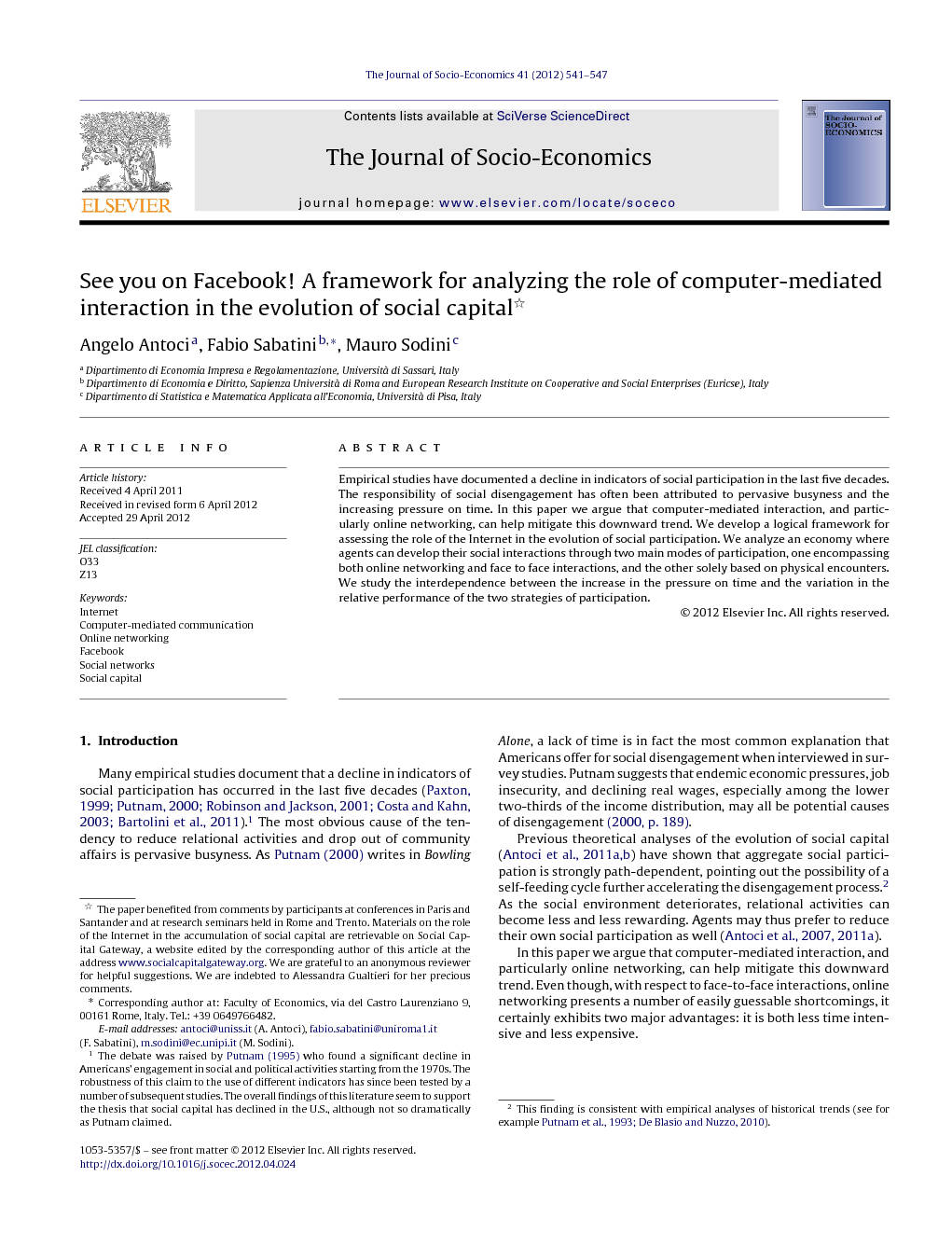 Empirical studies have documented a decline in indicators of social participation in the last five decades. The responsibility of social disengagement has often been attributed to pervasive busyness and the increasing pressure on time. In this paper we argue that computer-mediated interaction, and particularly online networking, can help mitigate this downward trend. We develop a logical framework for assessing the role of the Internet in the evolution of social participation. We analyze an economy where agents can develop their social interactions through two main modes of participation, one encompassing both online networking and face to face interactions, and the other solely based on physical encounters. We study the interdependence between the increase in the pressure on time and the variation in the relative performance of the two strategies of participation.

Many empirical studies document that a decline in indicators of social participation has occurred in the last five decades (Paxton, 1999, Putnam, 2000, Robinson and Jackson, 2001, Costa and Kahn, 2003 and Bartolini et al., 2011).1 The most obvious cause of the tendency to reduce relational activities and drop out of community affairs is pervasive busyness. As Putnam (2000) writes in Bowling Alone, a lack of time is in fact the most common explanation that Americans offer for social disengagement when interviewed in survey studies. Putnam suggests that endemic economic pressures, job insecurity, and declining real wages, especially among the lower two-thirds of the income distribution, may all be potential causes of disengagement (2000, p. 189). Previous theoretical analyses of the evolution of social capital (Antoci et al., 2011a and Antoci et al., 2011b) have shown that aggregate social participation is strongly path-dependent, pointing out the possibility of a self-feeding cycle further accelerating the disengagement process.2 As the social environment deteriorates, relational activities can become less and less rewarding. Agents may thus prefer to reduce their own social participation as well (Antoci et al., 2007 and Antoci et al., 2011a). In this paper we argue that computer-mediated interaction, and particularly online networking, can help mitigate this downward trend. Even though, with respect to face-to-face interactions, online networking presents a number of easily guessable shortcomings, it certainly exhibits two major advantages: it is both less time intensive and less expensive. There are at least three reasons to suspect that web-mediated social participation can work as an effective strategy to protect the relational sphere of individuals’ lives from the pressure of time. First, it is less exposed to the deterioration of the social environment that physically surrounds individuals. Online networking allows people to interact with friends and acquaintances even in distant locations. Second, it is less time consuming than face-to-face interaction. So, it suffers less from the reduction in the time available for social participation. Social networking sites like Facebook and Twitter allow users to stay in touch with friends in their spare time, while sitting at a desk during their working day or while waiting for the train. Third, online interactions contribute to the accumulation of an “Internet social capital” which benefits solely Internet users. A peculiarity of this kind of social capital is that it allows asynchronous social interactions: one can benefit from another's participation, for example through the act of reading a message or viewing a photo, even if the person who wrote the message or posted the photo is currently offline. In our view, social participation through the Internet can be considered as a “defensive choice” allowing people to protect their relations from the rising pressure on time and from the possible decrease in opportunities for physical encounters. The spreading of this mode of participation can lead to second-best scenarios, in the case that face-to-face interaction is socially optimal. However, as shown in Antoci et al. (2011c), it may prevent the economy from falling into a “social poverty trap”. In this paper we develop a theoretical framework for assessing the potential role of Internet-mediated interaction in halting the self-feeding process of declining participation. To this purpose, we analyze an economy where agents can develop their social participation in two main modes: they can adopt a “social networking strategy”, allowing them to participate both through online networking and face-to-face interaction. Or they can opt for a “face-to-face strategy”, which does not encompass Internet-mediated interaction. In this case, all relationships take place through face-to-face encounters. Our main objective is to point out the possible interdependence between the rise in pressure on time and the variation in the relative performance of the two strategies of participation. This operation is intended to provide theoretical research, as well as the rapidly growing empirical literature on the role of the Internet, with a logical framework for analyzing the causal nexus possibly connecting phenomena such as online networking, other forms of web-mediated communication, the evolution of human interaction, and the accumulation of social capital. The remainder of the paper is organized as follows: in the next section we review the related literature. In Section 3 we present our framework. In light of this framework, Section 4 discusses the interdependence between the phenomena we are considering. The paper finishes with a few concluding remarks and considerations for further studies.

This paper develops an evolutionary framework to explore the dynamics of social interaction in an environment where social relationships can be developed in two possible ways: through face-to-face encounters (the FF strategy), or by means of a mix of actual meetings and online interactions (SN strategy). Our findings suggest that the new opportunities for participation offered by social networking may progressively lead a growing share x of the population to embrace the SN strategy. The process is path dependent: the increase in x increases the wealth of ties on the Internet, thereby fostering the accumulation of online social capital and making social networking more and more attractive. At the end of the process, the economy is likely to converge to a state where all agents take care of their relationships both through face-to-face encounters and online networking, thereby expanding the stock of the social capital of the Internet at its highest possible level (β/γ)(β/γ). In principle, the analysis cannot provide a precise evaluation of the social desirability of this scenario. Both the steady states (β/γ,1)(β/γ,1) and (0,0) can be socially suboptimal solutions to the model, depending on the payoff structure. In previous papers, we showed how the reduction in the time p devoted to social participation can trigger self-feeding processes leading to the progressive erosion of the stock of social capital. A decline in social participation may in fact reduce the productivity of the time spent on human interactions, thereby stimulating a process of substitution of relational goods with material ones, which will in turn cause a further decline in social participation ( Antoci et al., 2011a and Antoci et al., 2011b). In these works, we analyzed a scenario in which time for social participation is an endogenous variable (i.e. it depends on agents’ allocation choices) and social relationships can be developed just by means of face-to-face interaction. In the present paper, we address a scenario in which agents can interact with each other both through actual encounters and online networking, but p is exogenously given. The analysis shows that, under certain conditions, the substitution process causing the erosion of the stock of social capital can be impeded by the new forms of web-mediated communication. In this scenario, social interaction through the Internet can protect the relational sphere of individuals’ lives from the pressure of time. The social capital of the Internet constitutes an infrastructure allowing social participation to overcome space and time constraints. The asynchronous interactions which take place on the Web can allow people to reconcile working activities and pervasive busyness with the need to take care of human relationships. We point out the interdependence between the rise in the pressure of time and the variation in the relative performance of the different modes of social participation. Agents can choose to develop their social participation through online networking as a defensive strategy against pervasive busyness. This result may look predictable, but the paper adds to the literature by providing a logical framework for analyzing the interdependence between increasing busyness, social participation and emerging phenomena such as online networking and, in general, Internet-mediated communication. The next step in our research programme will be the analysis of the agents’ choice between the two possible strategies of social interaction within a new framework where the time p for social participation is no longer exogenously given.