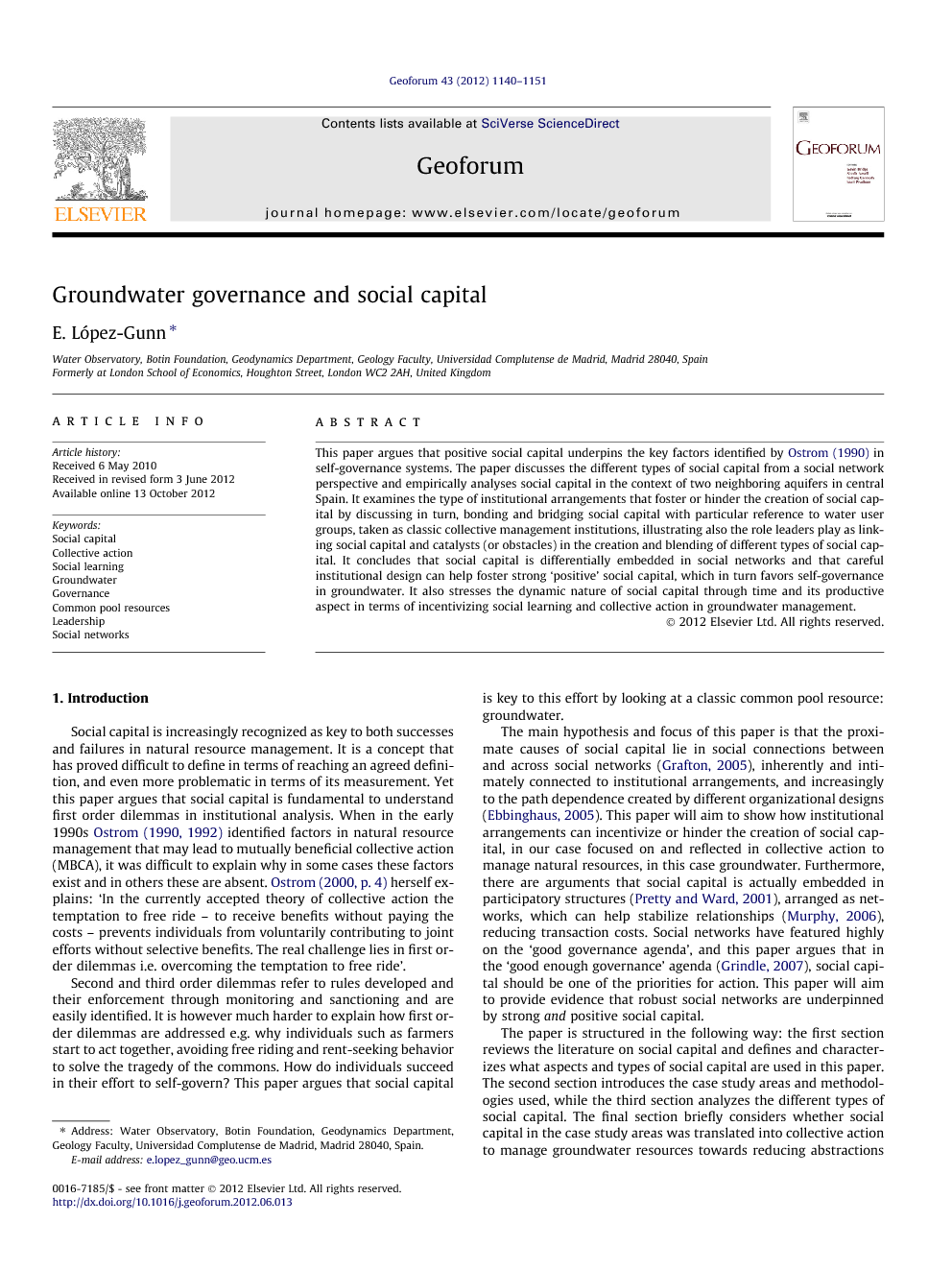 Social capital is increasingly recognized as key to both successes and failures in natural resource management. It is a concept that has proved difficult to define in terms of reaching an agreed definition, and even more problematic in terms of its measurement. Yet this paper argues that social capital is fundamental to understand first order dilemmas in institutional analysis. When in the early 1990s Ostrom, 1990 and Ostrom, 1992 identified factors in natural resource management that may lead to mutually beneficial collective action (MBCA), it was difficult to explain why in some cases these factors exist and in others these are absent. Ostrom (2000, p. 4) herself explains: ‘In the currently accepted theory of collective action the temptation to free ride – to receive benefits without paying the costs – prevents individuals from voluntarily contributing to joint efforts without selective benefits. The real challenge lies in first order dilemmas i.e. overcoming the temptation to free ride’. Second and third order dilemmas refer to rules developed and their enforcement through monitoring and sanctioning and are easily identified. It is however much harder to explain how first order dilemmas are addressed e.g. why individuals such as farmers start to act together, avoiding free riding and rent-seeking behavior to solve the tragedy of the commons. How do individuals succeed in their effort to self-govern? This paper argues that social capital is key to this effort by looking at a classic common pool resource: groundwater. The main hypothesis and focus of this paper is that the proximate causes of social capital lie in social connections between and across social networks (Grafton, 2005), inherently and intimately connected to institutional arrangements, and increasingly to the path dependence created by different organizational designs (Ebbinghaus, 2005). This paper will aim to show how institutional arrangements can incentivize or hinder the creation of social capital, in our case focused on and reflected in collective action to manage natural resources, in this case groundwater. Furthermore, there are arguments that social capital is actually embedded in participatory structures (Pretty and Ward, 2001), arranged as networks, which can help stabilize relationships (Murphy, 2006), reducing transaction costs. Social networks have featured highly on the ‘good governance agenda’, and this paper argues that in the ‘good enough governance’ agenda (Grindle, 2007), social capital should be one of the priorities for action. This paper will aim to provide evidence that robust social networks are underpinned by strong and positive social capital. The paper is structured in the following way: the first section reviews the literature on social capital and defines and characterizes what aspects and types of social capital are used in this paper. The second section introduces the case study areas and methodologies used, while the third section analyzes the different types of social capital. The final section briefly considers whether social capital in the case study areas was translated into collective action to manage groundwater resources towards reducing abstractions to a rate in accordance with available resources as defined by the European Water Framework Directive on good ecological status (CEC, 2000).

This paper has argued that in the question on why farmers in some cases (and not in others) act to solve first order dilemmas, ‘social capital’ is a missing piece in the jigsaw. Social capital offers a good explanation for the success in key factors that determine self-governance. Institutions, when correctly designed, enhance community based natural resource management. The paper focused on social capital, embedded in WUA structure and understanding collaborative social capital across different actors. This analysis also emphasized the key role of leadership as a catalyst for both communal/bonding and collaborative/bridging social capital. Certain conditions are more likely to promote the creation of social capital, and in turn certain groups eventually translate this into a capacity to trigger collective action for the management of common pool resources. The WUA in Western Mancha opted to side with vested interests, rather than build on bridging trust (understood as trust in political and societal institutions). This is in stark contrast with Eastern Mancha where bonding and bridging social capital have been created, and imbued with a positive collective memory. Self-esteem is high in Eastern Mancha and so is self-determination, to the extent that Eastern Mancha has successfully moved towards achieving most factors that foster self-management (as described by Ostrom (1990)). The conclusion therefore is that institutional arrangements and design do matter. The building blocks of bonding and bridging social capital have to be identified, and these come to life with the strong catalyst of good leadership (linking social capital). The range of social capital also stresses that social capital operates most effectively when it is organized at multiple levels (Brondizio et al., 2009). Therefore, social capital is crucial to the explanation for the underlying presence or not of factors that lead to collective action, and in turn as shown in these two cases, in collective action to manage groundwater. It explains how first order dilemmas can be solved through the creation and build up of social capital. Yet it is a difficult enterprise, which is often deeply embedded in particular geographical locations and path dependencies, largely influenced by local culture and history. This will inherently create a certain predisposition towards certain outcomes from the outset. The key is finding the institutional design which can re-enforce the positive aspects of bonding social capital, whilst weakening its more negative, insular or isolating aspects. Yet bonding social capital often is a necessary but not sufficient condition; Bridging social capital is also required, the ability to trust and be able to collaborate and cooperate with external organizations, in other words, the density of networks generated. Often, a key ingredient is successful leadership, catalyzing bonding and bridging social capital, successfully blending both to help trigger collective action. As Foley and Edwards summarize (1999, p. 146) a careful list of ingredients is required to create social capital: ‘Social networks, existing organizations and enterprising individuals conspire to create a cumulative effect, which may be absent from other settings’. The evolution of social capital over the last 10 years offers the evidence that social capital is highly dynamic and therefore highlights the opportunities it opens to the good governance agenda in groundwater management.