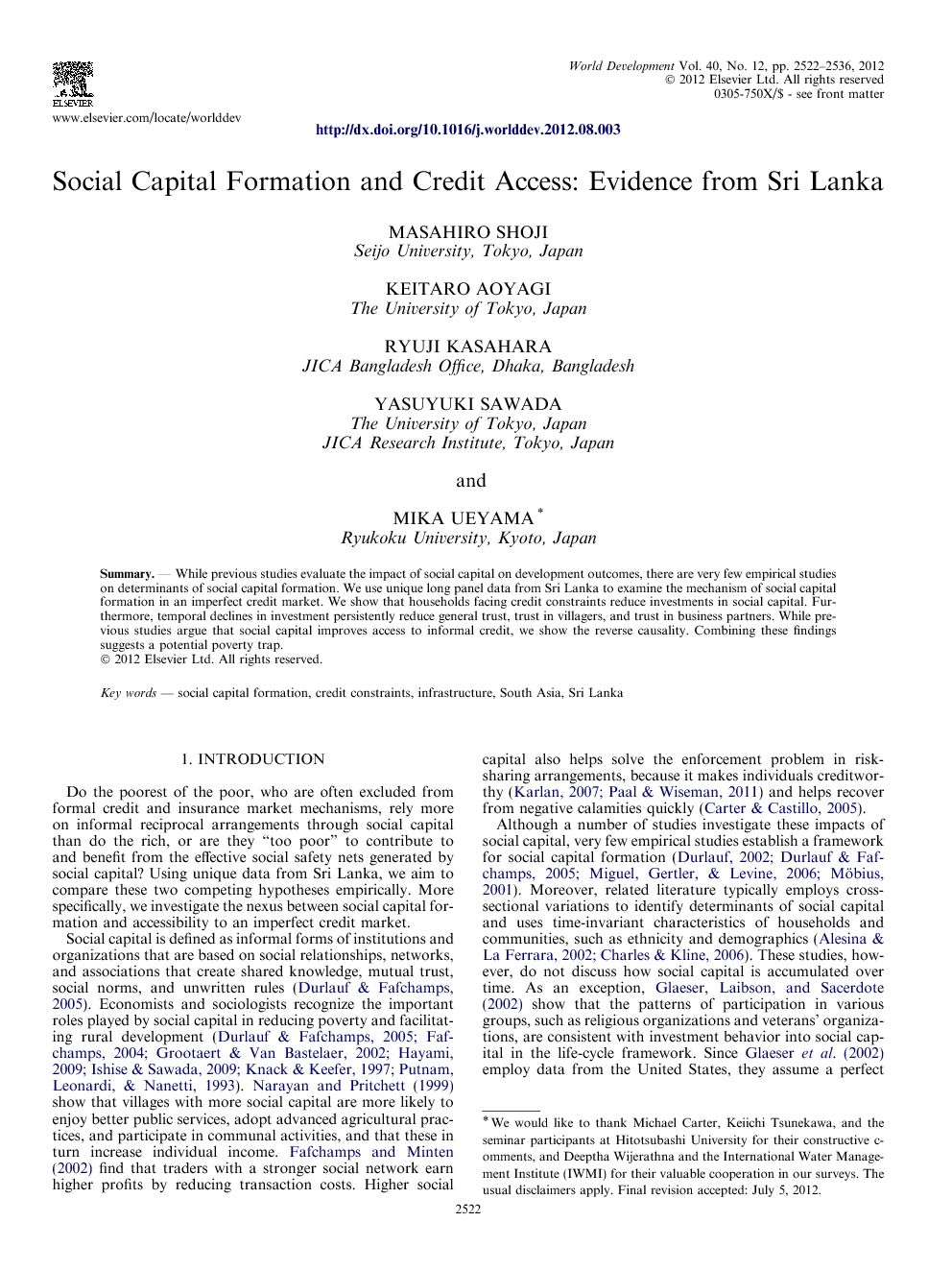 This study examined the process of social capital formation in the framework of an imperfect credit market. If the credit market is less developed, negative shocks significantly change household behavior such as time allocated to various activities. We showed that credit-constrained households had to reduce their resource allocation for social capital investment. It was also found that households that had previously contributed to public goods suffered less from a lower level of trust. These findings imply that the persistent effect of temporal declines in social capital investment due to credit/insurance market imperfections may be a cause of the heterogeneous level of social capital among community members. While previous studies argue that those who are less trustworthy are more likely to suffer from poor access to informal credit (Karlan, 2007), this study shows the opposite direction of causality: poor credit accessibility causes lower trust. The combination of these findings and the positive correlation between trust and trustworthiness (Glaeser, Laibson, Scheinkman, & Soutter, 1999), together may suggest the possibility of a poverty trap: credit constraints cause households to make low investments in social capital; since households with poor social capital stock suffer from low trust toward business partners, villagers, and other individuals, this possibly leads to poor access to informal credit. Thus, households that have been credit-constrained could be even more vulnerable to risks, because the availability of credit can function as effective insurance against shocks (Eswaran & Kotwal, 1989). This negative cycle could spill over into the broader community in at least two ways. First, the absence of a member from a community meeting may reduce the benefits derived from the meeting for the participants. This, in turn, could be a disincentive for other villagers to attend the meetings. Second, this study showed that households facing constraints are less likely to participate in the maintenance of communal canals. This directly diminishes the productivity of irrigation infrastructure, again causing credit constraints. A possible policy implication derived from these arguments may be as follows: the improvement of the credit market is essential to reduce poverty and enhance social capital. In particular, if there indeed exist multiple equilibria including a “high” equilibrium and “low” equilibrium—that is, a poverty trap—an intensive intervention or a “big push” to relax binding credit constraints would be required.