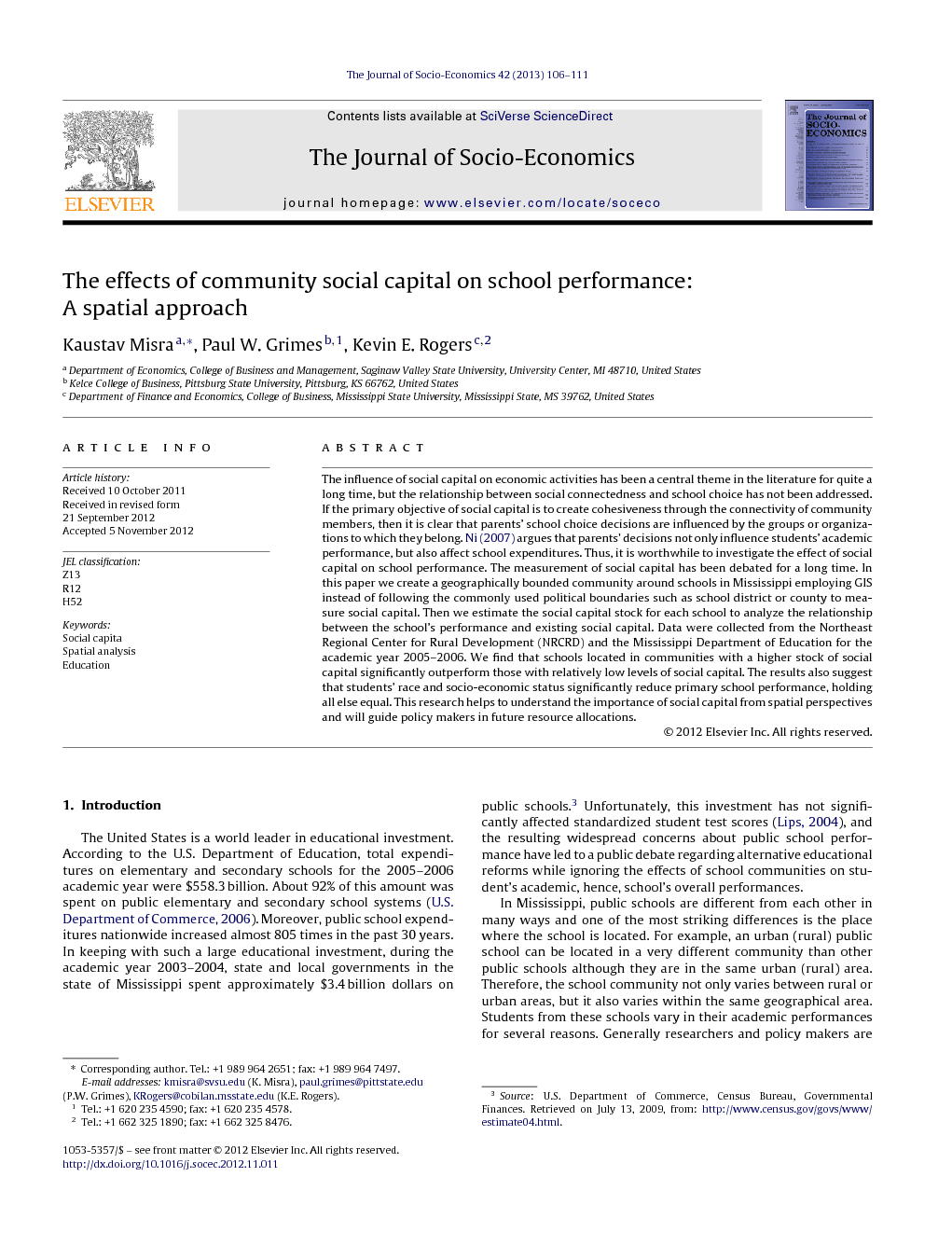 The influence of social capital on economic activities has been a central theme in the literature for quite a long time, but the relationship between social connectedness and school choice has not been addressed. If the primary objective of social capital is to create cohesiveness through the connectivity of community members, then it is clear that parents’ school choice decisions are influenced by the groups or organizations to which they belong. Ni (2007) argues that parents’ decisions not only influence students’ academic performance, but also affect school expenditures. Thus, it is worthwhile to investigate the effect of social capital on school performance. The measurement of social capital has been debated for a long time. In this paper we create a geographically bounded community around schools in Mississippi employing GIS instead of following the commonly used political boundaries such as school district or county to measure social capital. Then we estimate the social capital stock for each school to analyze the relationship between the school's performance and existing social capital. Data were collected from the Northeast Regional Center for Rural Development (NRCRD) and the Mississippi Department of Education for the academic year 2005–2006. We find that schools located in communities with a higher stock of social capital significantly outperform those with relatively low levels of social capital. The results also suggest that students’ race and socio-economic status significantly reduce primary school performance, holding all else equal. This research helps to understand the importance of social capital from spatial perspectives and will guide policy makers in future resource allocations.

The United States is a world leader in educational investment. According to the U.S. Department of Education, total expenditures on elementary and secondary schools for the 2005–2006 academic year were $558.3 billion. About 92% of this amount was spent on public elementary and secondary school systems (U.S. Department of Commerce, 2006). Moreover, public school expenditures nationwide increased almost 805 times in the past 30 years. In keeping with such a large educational investment, during the academic year 2003–2004, state and local governments in the state of Mississippi spent approximately $3.4 billion dollars on public schools.3 Unfortunately, this investment has not significantly affected standardized student test scores (Lips, 2004), and the resulting widespread concerns about public school performance have led to a public debate regarding alternative educational reforms while ignoring the effects of school communities on student's academic, hence, school's overall performances. In Mississippi, public schools are different from each other in many ways and one of the most striking differences is the place where the school is located. For example, an urban (rural) public school can be located in a very different community than other public schools although they are in the same urban (rural) area. Therefore, the school community not only varies between rural or urban areas, but it also varies within the same geographical area. Students from these schools vary in their academic performances for several reasons. Generally researchers and policy makers are trying to minimize that gap by looking at various internal issues, such as teacher's quality, student's socio-economic or even school's political/geographical location (rural or urban) while ignoring some external factors. For example, social capital may have a significant impact on students’ academic performance. In the next few paragraphs we will explore the linkage between social capital and students’ academic performance. Social capital is a measure of the connectivity between individuals in a community. In comparison to the location effect, which is inherently geographic, social capital in a community is derived from a connection between individuals and social networks. Coleman (1988), who developed the concept of social capital, argues that it is an equally important factor in personal development as is financial capital and human capital. Social capital plays a significant role in explaining student educational attainment. Social capital in a community is created through connectedness among individuals through social organizations and clubs. There are different ways social capital can influence individual development, and the networking theory suggests one explanation. According to this theory, which is developed by Bryant and Norris (2002), there are three different aspects of social capital: bonding, bridging, and linking. Individuals optimize their relatedness with social organizations based on their personal goals, but all social organizations serve the common purpose of networking. One role of social networking is to inform community members about education and to provide ways to access and succeed in education. The importance of social capital in the development of human capital (Coleman, 1988, Gregory, 2003 and Putnam, 1993) and economic growth (Beugelsdijk and Smulders, 2009) is well established in the literature. Putman reports a growing disconnectedness in U.S. communities and believes that higher social capital improves student performance. More recent research shows that the accumulation of social capital positively influences the academic performance of students in a community (Meier, 2009). Evidence from some studies suggests that students obtain academic benefits from social capital (see Putman, 2000) while other authors such as (Meier, 2009) make the general argument that students’ achievements are positively related to a school's overall performance. There are reasons to believe that the effects of social capital on students’ academic achievement may differ from student to student. Intuition suggests that social capital aids students in connecting with resources that enhance educational attainment. As a thought experiment, compare a student in a community with no social capital to a student surrounded by numerous social organizations. The former student is likely to be somewhat isolated outside the classroom and relegated to study largely on their own. The latter student can more readily learn about community learning resources and connect with group study options. On average, you might expect the student surrounded by more social capital to learn more and perform better in the classroom. This leads to the following null hypothesis: Hypothesis. The degree of social capital available within a community will have no effect on student performance in local public schools, ceteris paribus. A rejection of this null hypothesis would suggest that social capital is associated with greater student performance. This result could have policy implications as communities allocate resources. Both public and private sectors within a community have the capacity to increase social capital. In some cases social organizations may be directly funded by either or both sectors. There might also be more indirect means of support through community infrastructure that promotes social interaction. The analysis in this study should provide insight on the likely effectiveness of allocating resources to social organizations within a community. The remainder of the paper proceeds as follows. Section 2 presents the background literature on social capital. Section 3 examines the methodology to measure social capital and explores the data used in the study, while Section 4 presents results. Section 5 concludes by synthesizing the key findings from the results.

The purpose of this study is to examine whether social capital is related to school performance. This is not a new research agenda, but measuring the effect of social capital based on the redefined market is something never explored before. Previous research in education lacks a proper definition of a school market and this issue drives the interest and provides the scope for this paper. We followed Misra and Chi (2011) and Misra et al. (2012) to define a school market and then analyze the relationship between social capital and school performance. School level data from the Mississippi Board of Education is employed in this empirical model for the year 2005–2006. The overall score on the MCT examination is used to reflect the performance of students as a basis for measuring school output. The graduating grade's overall score on the MCT tests is employed as a dependent variable in the primary schools model. Analyses of these models are conducted using different market areas of 5 miles, 15 miles and 25 miles. The following part of the summary is drawn from the ordinary least square model where several explanatory variables are regressed on the overall score. The number of teachers per student, the percent of free lunch students, the percent of black students, and the social capital variables are extremely significant in these models. Hence, we conclude that these variables are primary school performance determinants. The effect of social capital in a primary school is significant. It appears that the human capital held by teachers, such as teaching experience and education attainment, are insignificant in primary schools. The degree of effectiveness may depend on student population. Middle or high schools students are mostly teenagers; therefore an effective teaching or instructional leadership style may have been needed by experienced teachers with higher levels of education. However, in primary schools where mostly children are served, experience and higher education held by teachers might not have mattered as much for the students’ academic success. Using these results, student academic performance is significantly related to the teacher's race which is consistent with Hanushek (1999) and King (1993). At the same time, it failed to support the results presented in Dee (2004) that racial parity between a teacher and students supposedly increases student academic performance. Unfortunately, the results presented in this paper concluded that racial parity does not matter in student performance. Hence, restructuring school personnel may not be important to improving school performance. Not surprisingly, the percent of black students and the percent of free lunch enrollment variables are significant in different models, regardless of market size and output. These results further confirmed previous findings that a student's family background and income are important factors to academic performance. Previous research has pointed out a number of reasons why black and poor students are at risk of poor academic performance. For example, Ching (2000) mentioned that a student's cognitive abilities are related to family income and a high number of black students’ families live below the poverty line in this state.6 A number of interventions could be used to improve the performance of these students, including effective teaching, parental education, reward programs, etc., which will guide these students toward success. Social capital is significant in all models for primary schools with the expected sign. A school located in a community with less social capital stock tended to have lower performing students. This impact, however was very small, suggesting that the returns to building social capital in a community are minor and not likely to exceed any non-negligible costs of developing new organizations. Therefore, the allocation of local resources into fostering more social capital is likely a poor investment if increased student performance is the objective. The results from this analysis should provide better conclusions since this is a school level analysis rather than by public school district, or at the county or state level. State and local policy makers should carry out local policy programs instead of a common policy for all schools across the state. These customized local school policies will ultimately help increase individual school performance. In summary, examining the affects of social capital on public school efficiency informs policymakers that future funding for community development is required.