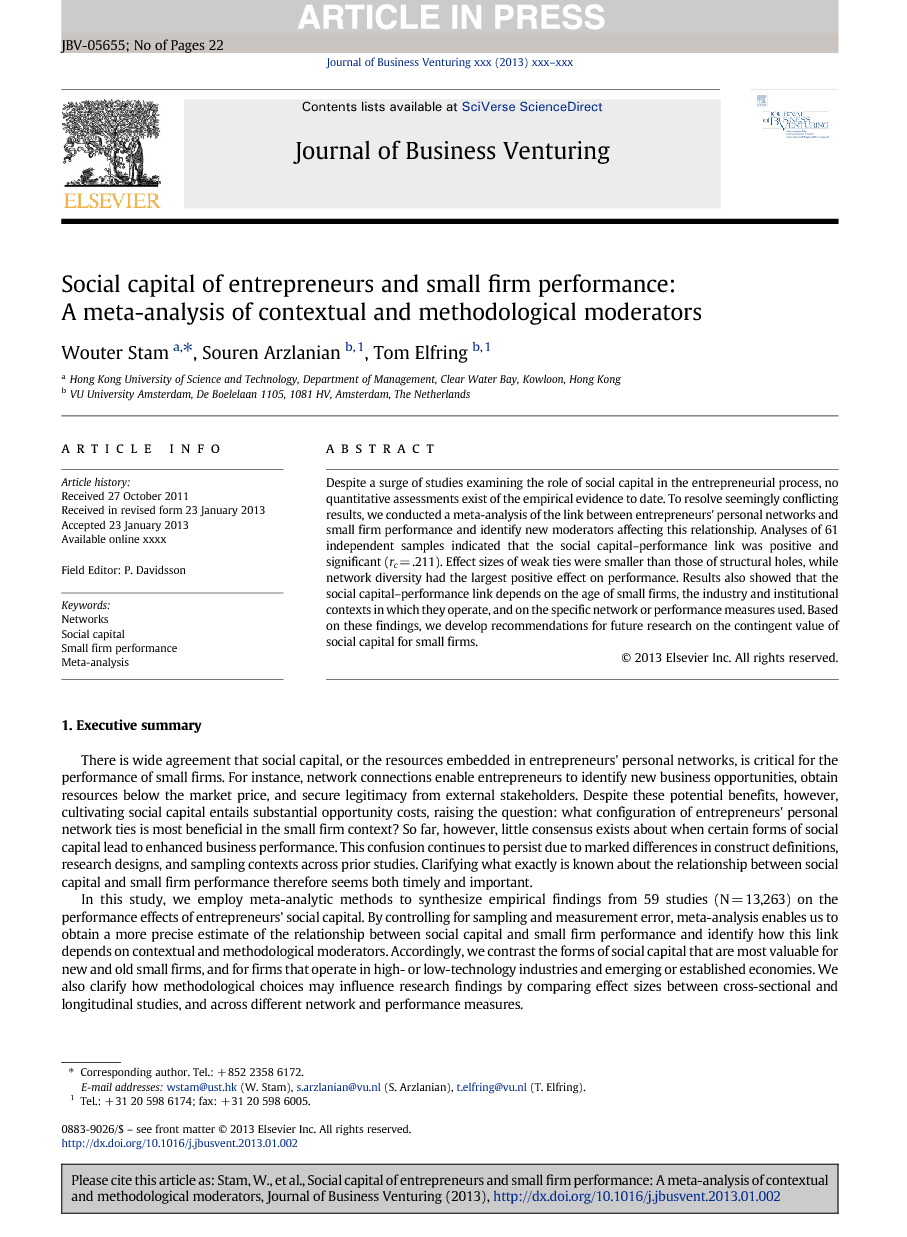 Despite a surge of studies examining the role of social capital in the entrepreneurial process, no quantitative assessments exist of the empirical evidence to date. To resolve seemingly conflicting results, we conducted a meta-analysis of the link between entrepreneurs' personal networks and small firm performance and identify new moderators affecting this relationship. Analyses of 61 independent samples indicated that the social capital–performance link was positive and significant (rc = .211). Effect sizes of weak ties were smaller than those of structural holes, while network diversity had the largest positive effect on performance. Results also showed that the social capital–performance link depends on the age of small firms, the industry and institutional contexts in which they operate, and on the specific network or performance measures used. Based on these findings, we develop recommendations for future research on the contingent value of social capital for small firms.

Researchers increasingly acknowledge that entrepreneurial activity is embedded in network relationships that direct resource flows to entrepreneurs who are somehow better connected (Aldrich and Zimmer, 1986 and Hoang and Antoncic, 2003). The literature clearly indicates that social capital, or the resources that entrepreneurs may access through their personal networks (Adler and Kwon, 2002), allows entrepreneurs to identify opportunities (Bhagavatula et al., 2010), mobilize resources (Batjargal, 2003), and build legitimacy for their firms (Elfring and Hulsink, 2003). Yet despite this surge of interest, little consensus exists concerning what exactly is known about the social capital–performance link in the small firm context (Maurer and Ebers, 2006 and Stuart and Sorensen, 2007). Unresolved debates, fueled by ambiguous research findings, have surfaced about three key issues. First, conflicting perspectives exist regarding the specific network properties that constitute social capital. Whereas some have focused on network structure (Stam, 2010), others have considered the strength of entrepreneurs' network relationships (McEvily and Zaheer, 1999) or the resources held by their network contacts (Batjargal, 2003). Disagreement therefore persists about the relative value of sparse and cohesive network structures (Batjargal, 2010), weak and strong ties (Patel and Terjesen, 2011), and diverse versus homogeneous networks (Renzulli et al., 2000). Accordingly, extant empirical evidence remains inconclusive, with some even arguing that ‘studies have rarely come up with significant results’ (Witt, 2004: 391). The dimensions of entrepreneurs' social capital that enhance small firm performance thus remains an open question. Second, ambiguity exists about the temporal contingencies that govern when certain forms of social capital are most beneficial for small firm performance. Despite the recognition that entrepreneurs might need to adapt their personal networks to accommodate firms' evolving resource needs (Martinez and Aldrich, 2011), researchers disagree about the precise way in which firm age alters the value of different networking strategies. While some have argued that cohesive, strong-tie networks are conducive for new firms (Hite and Hesterly, 2001), others have contended that diverse, weak-tie networks are favorable at the early stages of firm development (Elfring and Hulsink, 2007). A systematic analysis of how the optimal configuration of entrepreneurs' social capital changes as small firms mature thus seems warranted. Third, although researchers have begun to probe the generalizability of network effects (Burt, 2000), it is still unclear what contextual contingencies might condition the value of entrepreneurs' social capital. So far, most studies have focused on small firms in particular industries even though there is reason to believe that industry conditions may amplify network effects on firm performance (Koka and Prescott, 2008). Similarly, despite initial evidence that social capital might operate differently in different institutional environments (Batjargal, 2010), past research has typically focused on small firms in either established or emerging economies. Thus, to resolve conflicting findings, research is needed that can reveal how small firms operating in different environmental contexts might benefit from distinct forms of social capital. In sum, we find broad agreement that entrepreneurs' social capital constitutes a key asset for small firms, but no consensus about the conditions under which certain network properties lead to enhanced business performance. To help reconcile these theoretical debates, this study employs meta-analytic methods to quantitatively evaluate existing empirical evidence. Meta-analysis enables researchers to synthesize cumulative research findings, correct these findings for sampling and measurement error, and assess whether hypothesized relationships have been successfully replicated (Combs et al., 2011). In this sense, our meta-analysis extends past studies that have typically focused on either structural, relational, or resource dimensions of entrepreneurs' social capital by comparing their relative influence on small firm performance. We thus provide important insights regarding the extent of empirical support for the different theories, such as structural hole theory and weak-tie theory, that currently prevail in the literature. In addition, we add to the literature by uncovering new theoretical moderators that may explain some of the contradictory findings in the literature. Eden (2002) argues that meta-analysis can facilitate theory development because it enables researchers to examine hypotheses that were not testable in primary studies. Accordingly, our meta-analysis identifies firm, industry, and institutional level moderators of the social capital–performance link that have received little empirical scrutiny. In so doing, we address recent calls to unearth the contingencies governing the effectiveness of entrepreneurs' networking strategies (Martinez and Aldrich, 2011). Finally, this meta-analysis contributes by identifying methodological moderators that may account for some of the mixed results in the literature. Specifically, we consider how the use of alternative network and performance measures influence research findings and examine differences in findings between cross-sectional and longitudinal studies. By examining these methodological moderators, we are in a position to provide valuable recommendations for future empirical research on social capital in the small firm context.

By synthesizing cumulative findings and uncovering new moderators, this meta-analysis contributes toward better understanding of the contingent value of social capital for small firms and reveals how sampling, research design, and measurement may influence research findings. For entrepreneurs, our results clearly indicate the importance of cultivating personal networks rich in bridging social capital but also reveal that distinct networking strategies are needed at different points in time and in different industries and countries. For researchers, our study certainly supports the increasingly prominent role that social capital theory assumes in the entrepreneurship field but raises new questions about its temporal and contextual boundary conditions. We truly hope that these insights invite scholars in the field to further disentangle the varied roles networks may assume in the entrepreneurial process.