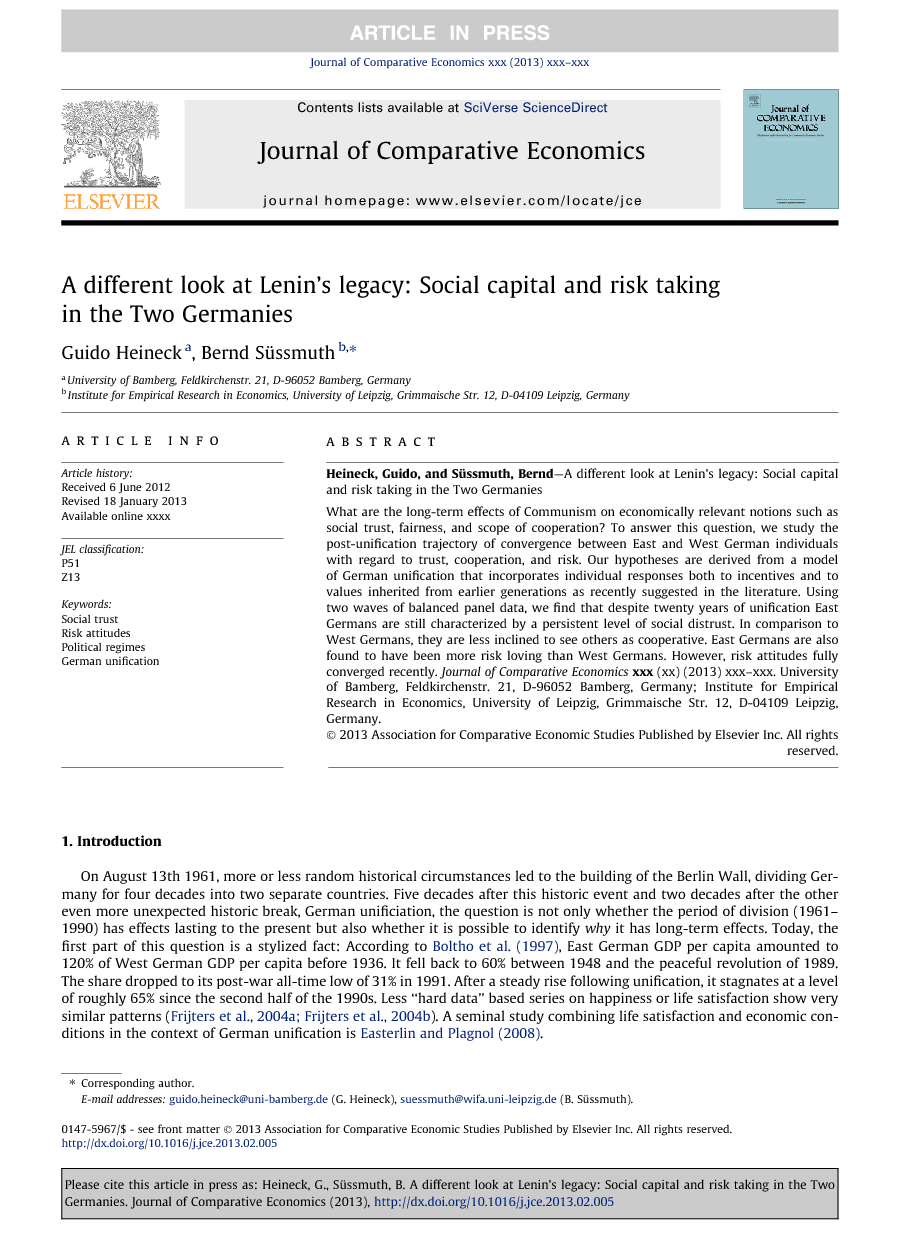 What are the long-term effects of Communism on economically relevant notions such as social trust, fairness, and scope of cooperation? To answer this question, we study the post-unification trajectory of convergence between East and West German individuals with regard to trust, cooperation, and risk. Our hypotheses are derived from a model of German unification that incorporates individual responses both to incentives and to values inherited from earlier generations as recently suggested in the literature. Using two waves of balanced panel data, we find that despite twenty years of unification East Germans are still characterized by a persistent level of social distrust. In comparison to West Germans, they are less inclined to see others as cooperative. East Germans are also found to have been more risk loving than West Germans. However, risk attitudes fully converged recently.

On November 9th 1989, when a more or less unintentional East German government announcement sent a surge of people westwards, ultimately bringing the wall down, a new chapter in German history began. For decades official propaganda in the GDR had tried to discredit the “exploitative” market-based economy and “rapacious” society of the FRG. The once omnipresent fear of denouncement and detainment seemingly ceased over night. Against this background, we addressed the question whether and if so by how much after 20 years of reunification restoration of social trust is completed, fairness and cooperativeness restored, and attitudes towards risk converged. While we find that risk attitudes fully converged in the second decade of reunification, it will take at least one generation for social trust and possibly much longer for perceived cooperativeness to converge. The implied trajectories of our estimates are shown to be in line with predictions from a model that incorporates individual responses both to incentives and to values inherited from earlier generations as recently suggested by Tabellini (2008a). This is a most remarkable result as it identifies the passing of cultural traits and values as a central channel of explanation for limited social convergence and long lasting effects from historic events in the context of German division and unification. It complements and to some extent also challenges other routes of explanation based on network externalities and scale effects (e.g. Uhlig, 2006) that require the assumption of persistence in their driving forces in order to generate discrepancies that last for several generations. Similarly, after more than two decades of an ongoing reunification process it seems not justified to argue that it is the institutional shock (as, for example, in Acemoglu et al., 2001, Acemoglu et al., 2002 and Acemoglu et al., 2005) that accounts for the limited convergence we observe for social trust as well as for individuals’ perceptions of others acting fair or being cooperative.