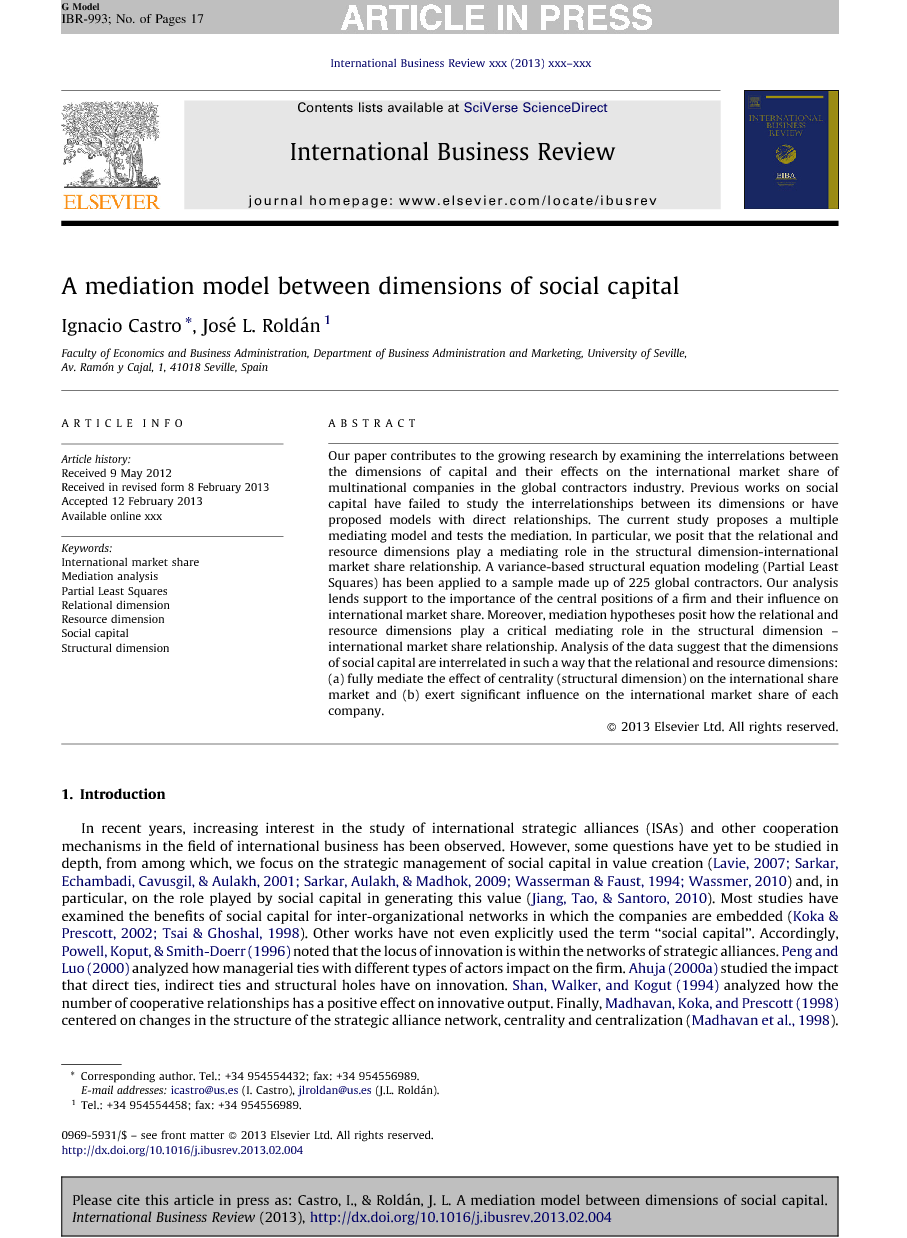 In this study, we aim to examine the social capital construct in greater depth through the application of a statistical mediation analysis. The structural dimension could be placed at the beginning of the process, whilst the relational and the resource dimensions occupy mediating positions between centrality (structural dimension) and international market share. Our results show that social capital dimensions are interrelated, in such a way that the relational and the resource dimensions fully mediate the effect of centrality on the international market share. Accordingly, the results have both theoretical and practical implications. 5.1. Theoretical implications This article is intended to respond to calls from different scholars for the need to broaden our theoretical understanding of social capital (Adler and Kwon, 2002 and Koka and Prescott, 2002). Based on this work, we have distinguished three dimensions which occupy successive stages or positions of the social capital process, that is, the structural, relational and resource dimensions. When we consider the model with the total effect (Fig. 2a), our results indicate that the more central the position of a firm in the global contractors network (i.e., the structural dimension), the greater the international market share achieved by the focal actor. However, the importance of the direct effect of the structural dimension decreases considerably in favor of the relational and resource dimensions when we analyze the full model (Fig. 2b). On the one hand, the relational dimension – a consequence of strengthening a firm's relationships and developing trust (Gulati, 1995b) – is more important than the mere establishment of an inter-organizational alliance. On the other hand, the resource dimension is the variable which has been more directly associated with firm performance (Batjargal, 2003 and Tsai and Ghoshal, 1998). Accordingly, our research shows that firms that have privileged access to partners’ resources can achieve a greater international market share than their competitors (Autio, Sapienza, & Almeida, 2000). Therefore, when undergoing the internationalization process, firms must obtain, share, assimilate and combine resources – primarily knowledge – in order to compete and to grow in international markets. In fact, the resource dimension represents the best predictor of the international market share of the global contractors’ network in our research model (it explains 18.77% of its explained variance), surpassing the direct influence of structural and relational dimensions on the final endogenous variable. Moreover, this study has helped to demystify the complex relationships between these different dimensions of social capital. Indeed, the structural model shows that all path coefficients between SD, RelD and ResD are significant. Consequently, such social capital dimensions are interrelated not only in a sequential process, but also in parallel (Tsai & Ghoshal, 1998); which is to say that the SD is significantly associated with RelD and ResD. More profoundly, we have shown that the relational and resource dimensions sequentially mediate the relationship between centrality and international market share. Our results further show that this is a full mediation. Accordingly, it demonstrates the relevance of strategic management of an alliance portfolio by the firm, in order to develop trusty relationships with valuable partners with the aim of exploiting the social capital and of achieving an international competitive advantage. Certainly, in the presence of the relational and resource dimensions, the direct impact of centrality on the international market share becomes insignificant. 5.2. Managerial implications The increasing importance of strategic alliances in the global business environment leads to the question of how MNCs should manage their alliance portfolios (Wassmer, 2010). On these lines, Mathews and Zander (2007) affirm that the competitive advantage of a firm is not due to owned assets that are exploited in international markets so much as it is due to the firm's ability to manage and to access the assets of others through inter-firm networks. A good understanding of social capital is needed to respond to this question, which means analyzing its dimensions and the interrelationships between them. In our empirical context, the results show that a firm's network position is important provided that trust is embedded in its network's ties and its partners have valuable resources which can be accessed by the focal firm. Therefore, managers take account of the way in which a certain dimension influences the other dimensions, in order to configure and manage their alliance portfolios. Managers should therefore follow a holistic approach (Wassmer, 2010) in the management of their alliance portfolio, which implies considering all the relations of the focal actor and all the dimensions and aspects of the configuration of their capital. This implies that managers should take into account, when selecting the partners and developing the relational structure or pattern, which partners are better adjusted to their strategic objectives and values. It is therefore more likely that they will develop strong and trusty relationships with their partners, in order to avoid opportunistic behaviors and to promote the exchange of resources and they should, moreover, understand which resources are necessary and valuable for their firms and, therefore, which are the most suitable partners. In conclusion, managers have to maximize network benefits and minimize network risks, and to reach this objective the managers should understand and value the interrelations existing between the different dimensions of social capital. To sum up, by identifying the dimensions of social capital and showing that relational and resource dimensions play a critical mediating role, managers will be able to manage their alliances or inter-organizational relationships more strategically and hopefully obtain better performance from social networks.