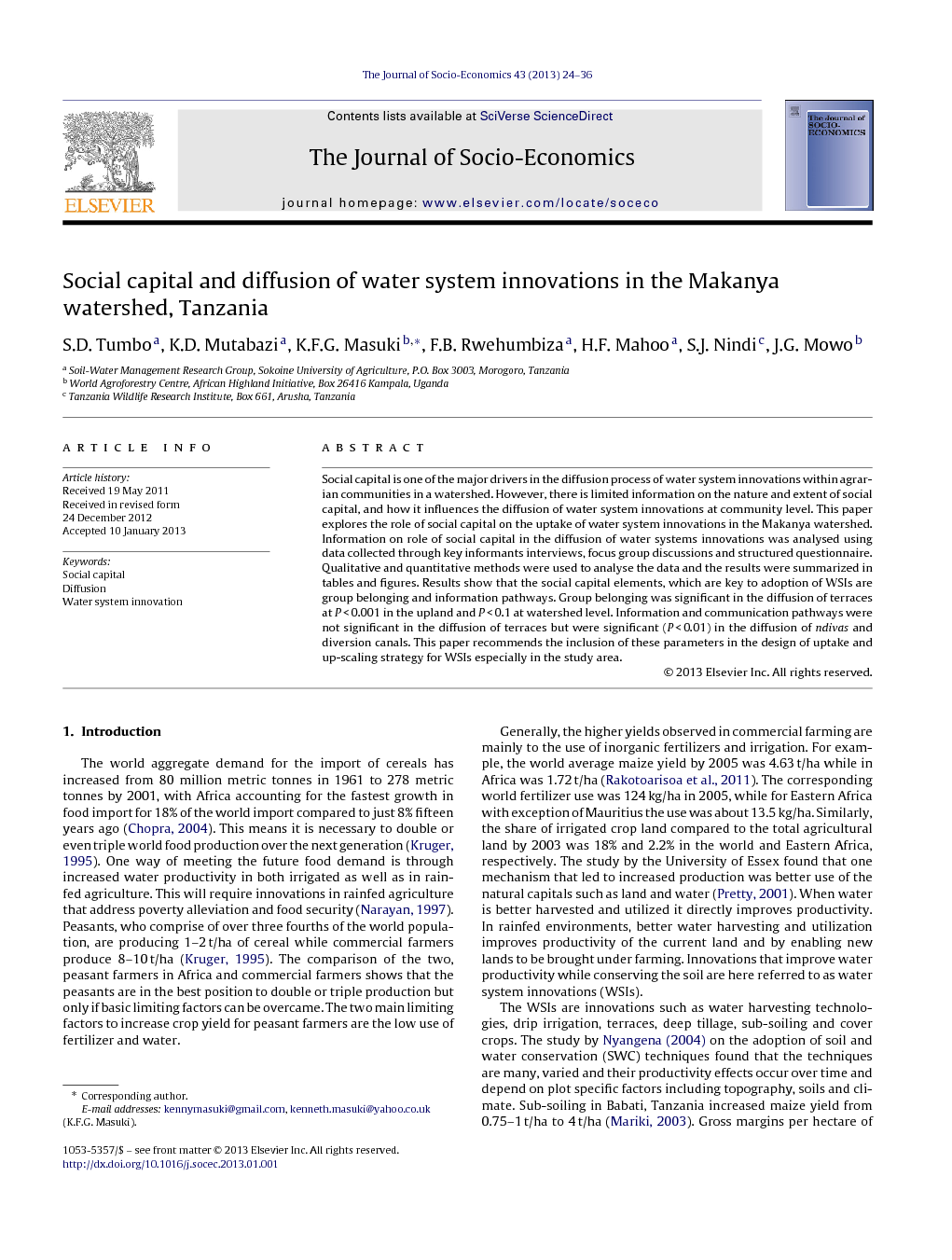 This study explored the influence of social capital variables in the uptake of innovations in the Makanya watershed. The study looked into the six social capital variables in relation to the uptake of three water system innovations, ndivas, diversion canals and terraces in respect to their higher adoption along the toposequence (upland, midslope and lowland). The descriptive analysis of the surveyed information showed that: • The watershed has a significant number of social groupings. The upland had more respondents belonging to diverse groups (water management, 57%, and livelihood improvement groups, 42%) compared to midslope and lowland. This implied that more people in the upland are exchanging ideas more frequently and therefore diffusion of innovations and possibly that's why there is higher adoption of terraces. • The level of trust of was very high among people of the same ethnic background (98% on average). Furthermore, respondents showed somewhat a higher level of mistrust on government officials at village level (15% of respondents) as well as district level (13% of respondents) compared to NGOs (6%) and projects (4%). The level of mistrust for government officials increased as one moves downstream of the watershed. • Participation in collective action reflected the characteristics of the nature of innovations in relation to the toposequence with higher level of adoption of terraces and canals in the upland and lowland, respectively. People in the upland were more willing to work on collective development activities whereas those in the lowland were more willing to work on maintenance of water infrastructure. The former is related to assisting each other in building stone and grass terraces and the later is related to cleaning water diversion canals. • Communication pathways or source of information that were recognized as source of information on innovations were seminars and radio. The importance of extension agents was found to decrease with distance away from the highway transecting the lowland • Neighbourhood and economic status were found to be the main factors for social cohesion and empowerment. Since most of the innovations require collective actions and not economic ability, this indicator will be strong in determining technology uptake. • Most farmers strongly showed that the level of inclusion in decision making is very low and therefore, their trust in the village government was also low. This is likely to affect the adoption of exogenous innovations that will be brought through the village government. The statistical approach into the surveyed information revealed that among the various social capital variables and the three innovations: • Most important predictor variable for the uptake of terraces is membership in groups at P < 0.05, with respect to social capital, and P < 0.1 with respect to social capital as well as individual/personal variables. Other social capital variables or determinants which positively correlated to diffusion of terraces were intensity of group membership, extent of interaction with different people, level of trust, extent of collective actions, information pathways, social cohesion and participation in political/governance activities. • This technology (ndivas) was highly adopted in the midslope than in the upland and lowland (25% adoption level). The identified social capital predictors for diffusion of ‘ndiva’ were the extent of interaction with the same people (P < 0.1) and information pathways (P < 0.01). Considering other variables, such as age of household head, the results in the ban is also an addition predictor of diffusion for ndiva (P < 0.05). • Membership in groups, intensity of group membership, extent of interaction with different people, the level of community trust and information pathways had positive effect in the uptake of innovations. • The study found that the universal social capital predictors along the toposequence and in terms of innovations are different with exceptional of two predictors which were group belonging and information pathways. Therefore, membership in groups, information pathways, which are universal determinants along the toposequence and water system innovations.