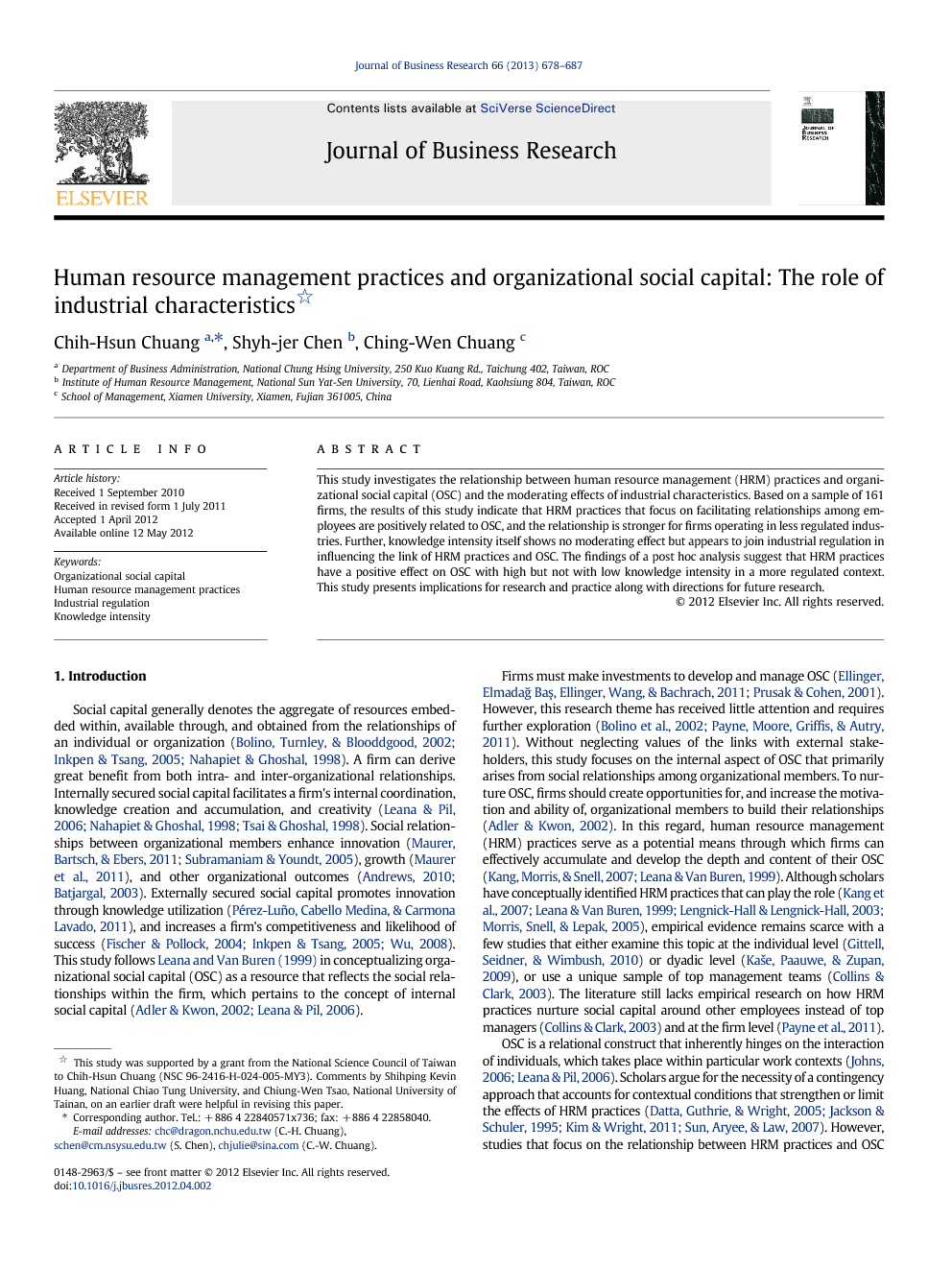 This study investigates the relationship between human resource management (HRM) practices and organizational social capital (OSC) and the moderating effects of industrial characteristics. Based on a sample of 161 firms, the results of this study indicate that HRM practices that focus on facilitating relationships among employees are positively related to OSC, and the relationship is stronger for firms operating in less regulated industries. Further, knowledge intensity itself shows no moderating effect but appears to join industrial regulation in influencing the link of HRM practices and OSC. The findings of a post hoc analysis suggest that HRM practices have a positive effect on OSC with high but not with low knowledge intensity in a more regulated context. This study presents implications for research and practice along with directions for future research.

Social capital generally denotes the aggregate of resources embedded within, available through, and obtained from the relationships of an individual or organization (Bolino et al., 2002, Inkpen and Tsang, 2005 and Nahapiet and Ghoshal, 1998). A firm can derive great benefit from both intra- and inter-organizational relationships. Internally secured social capital facilitates a firm's internal coordination, knowledge creation and accumulation, and creativity (Leana and Pil, 2006, Nahapiet and Ghoshal, 1998 and Tsai and Ghoshal, 1998). Social relationships between organizational members enhance innovation (Maurer et al., 2011 and Subramaniam and Youndt, 2005), growth (Maurer et al., 2011), and other organizational outcomes (Andrews, 2010 and Batjargal, 2003). Externally secured social capital promotes innovation through knowledge utilization (Pérez-Luño, Cabello Medina, & Carmona Lavado, 2011), and increases a firm's competitiveness and likelihood of success (Fischer and Pollock, 2004, Inkpen and Tsang, 2005 and Wu, 2008). This study follows Leana and Van Buren (1999) in conceptualizing organizational social capital (OSC) as a resource that reflects the social relationships within the firm, which pertains to the concept of internal social capital (Adler and Kwon, 2002 and Leana and Pil, 2006). Firms must make investments to develop and manage OSC (Ellinger et al., 2011 and Prusak and Cohen, 2001). However, this research theme has received little attention and requires further exploration (Bolino et al., 2002 and Payne et al., 2011). Without neglecting values of the links with external stakeholders, this study focuses on the internal aspect of OSC that primarily arises from social relationships among organizational members. To nurture OSC, firms should create opportunities for, and increase the motivation and ability of, organizational members to build their relationships (Adler & Kwon, 2002). In this regard, human resource management (HRM) practices serve as a potential means through which firms can effectively accumulate and develop the depth and content of their OSC (Kang et al., 2007 and Leana and Van Buren, 1999). Although scholars have conceptually identified HRM practices that can play the role (Kang et al., 2007, Leana and Van Buren, 1999, Lengnick-Hall and Lengnick-Hall, 2003 and Morris et al., 2005), empirical evidence remains scarce with a few studies that either examine this topic at the individual level (Gittell, Seidner, & Wimbush, 2010) or dyadic level (Kaše, Paauwe, & Zupan, 2009), or use a unique sample of top management teams (Collins & Clark, 2003). The literature still lacks empirical research on how HRM practices nurture social capital around other employees instead of top managers (Collins & Clark, 2003) and at the firm level (Payne et al., 2011). OSC is a relational construct that inherently hinges on the interaction of individuals, which takes place within particular work contexts (Johns, 2006 and Leana and Pil, 2006). Scholars argue for the necessity of a contingency approach that accounts for contextual conditions that strengthen or limit the effects of HRM practices (Datta et al., 2005, Jackson and Schuler, 1995, Kim and Wright, 2011 and Sun et al., 2007). However, studies that focus on the relationship between HRM practices and OSC neglect contextual factors, particularly the firm's external environments. The current study identifies industry as a pivotal context within which firms frame and execute HRM practices (Datta et al., 2005, Jackson and Schuler, 1995 and Kim and Wright, 2011), incorporating industrial characteristics (industrial regulation and knowledge intensity) into the research framework. This study builds on and extends existing literature (e.g., Collins and Clark, 2003, Gittell et al., 2010 and Kaše et al., 2009) by exploring employee-focused OSC and examining the relationship between HRM practices and OSC at the firm level. More importantly, this study investigates the contingent effects of industrial characteristics to identify the context in which HRM practices are likely to exert differential influence on OSC. The next section formalizes the concept of OSC and identifies HRM practices that promote relationship-building among employee and foster OSC. It also explores the potentially moderating effects of industrial regulation and knowledge intensity. 3 and 4 respectively present the methodology and results of this empirical study. Finally, Section 5 discusses the research and managerial implications of the findings and highlights directions for future research.