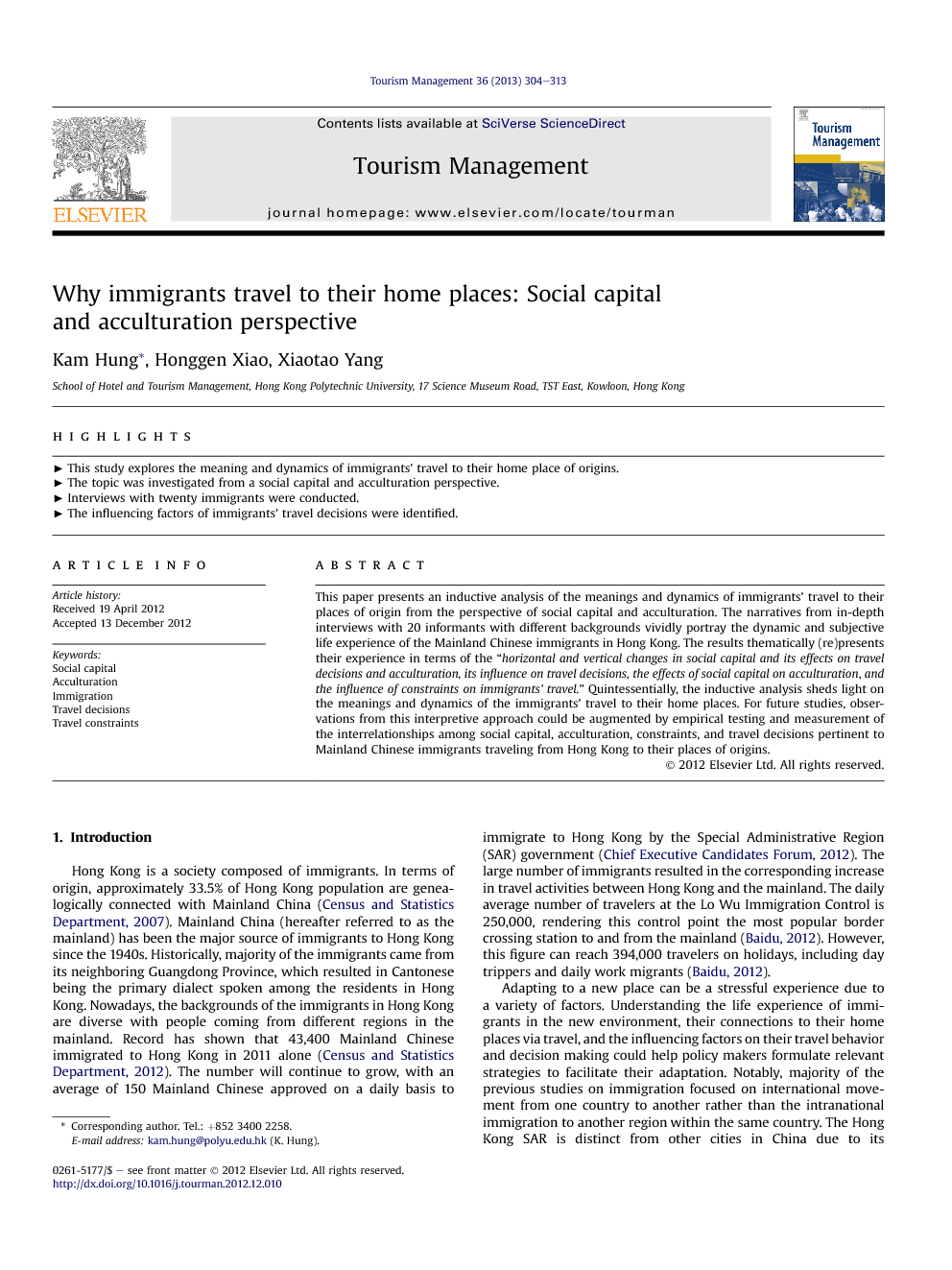 This paper presents an inductive analysis of the meanings and dynamics of immigrants' travel to their places of origin from the perspective of social capital and acculturation. The narratives from in-depth interviews with 20 informants with different backgrounds vividly portray the dynamic and subjective life experience of the Mainland Chinese immigrants in Hong Kong. The results thematically (re)presents their experience in terms of the “horizontal and vertical changes in social capital and its effects on travel decisions and acculturation, its influence on travel decisions, the effects of social capital on acculturation, and the influence of constraints on immigrants' travel.” Quintessentially, the inductive analysis sheds light on the meanings and dynamics of the immigrants' travel to their home places. For future studies, observations from this interpretive approach could be augmented by empirical testing and measurement of the interrelationships among social capital, acculturation, constraints, and travel decisions pertinent to Mainland Chinese immigrants traveling from Hong Kong to their places of origins.

Hong Kong is a society composed of immigrants. In terms of origin, approximately 33.5% of Hong Kong population are genealogically connected with Mainland China (Census and Statistics Department, 2007). Mainland China (hereafter referred to as the mainland) has been the major source of immigrants to Hong Kong since the 1940s. Historically, majority of the immigrants came from its neighboring Guangdong Province, which resulted in Cantonese being the primary dialect spoken among the residents in Hong Kong. Nowadays, the backgrounds of the immigrants in Hong Kong are diverse with people coming from different regions in the mainland. Record has shown that 43,400 Mainland Chinese immigrated to Hong Kong in 2011 alone (Census and Statistics Department, 2012). The number will continue to grow, with an average of 150 Mainland Chinese approved on a daily basis to immigrate to Hong Kong by the Special Administrative Region (SAR) government (Chief Executive Candidates Forum, 2012). The large number of immigrants resulted in the corresponding increase in travel activities between Hong Kong and the mainland. The daily average number of travelers at the Lo Wu Immigration Control is 250,000, rendering this control point the most popular border crossing station to and from the mainland (Baidu, 2012). However, this figure can reach 394,000 travelers on holidays, including day trippers and daily work migrants (Baidu, 2012). Adapting to a new place can be a stressful experience due to a variety of factors. Understanding the life experience of immigrants in the new environment, their connections to their home places via travel, and the influencing factors on their travel behavior and decision making could help policy makers formulate relevant strategies to facilitate their adaptation. Notably, majority of the previous studies on immigration focused on international movement from one country to another rather than the intranational immigration to another region within the same country. The Hong Kong SAR is distinct from other cities in China due to its independent constitution and political system. Because of these differences, relocation from the mainland to Hong Kong is commonly (and legally) regarded as immigration by the public. Thus, Hong Kong provides an interesting context for understanding the immigrants' experience in connection with their travel to their place of origins. The large number of Chinese immigrants in Hong Kong has stimulated research interest in immigration in this SAR. A wide range of topics have been explored, including the immigrants' social welfare and housing (Au, 1998; Lee, 2000), identity negotiation (Ho, 2006; Newendorp, 2010), coping and adaptation (Fung, 2005; Li, 1989; Man, 2001), and community integration (Hsueh, 1998; Sinn & Wong, 2005). However, little scholarly attention has been dedicated toward understanding the immigrants' trips to their places of origin and the influencing factors in their travel decision making. Such an understanding will definitely shed light on the immigrants' life experience in the SAR, which is essential in formulating the corresponding strategies to help them adapt to the new society. Thus, the present study examines the Mainland Chinese immigrants' life experience in Hong Kong and identifies the factors that affect their travel decisions to their place of origins.