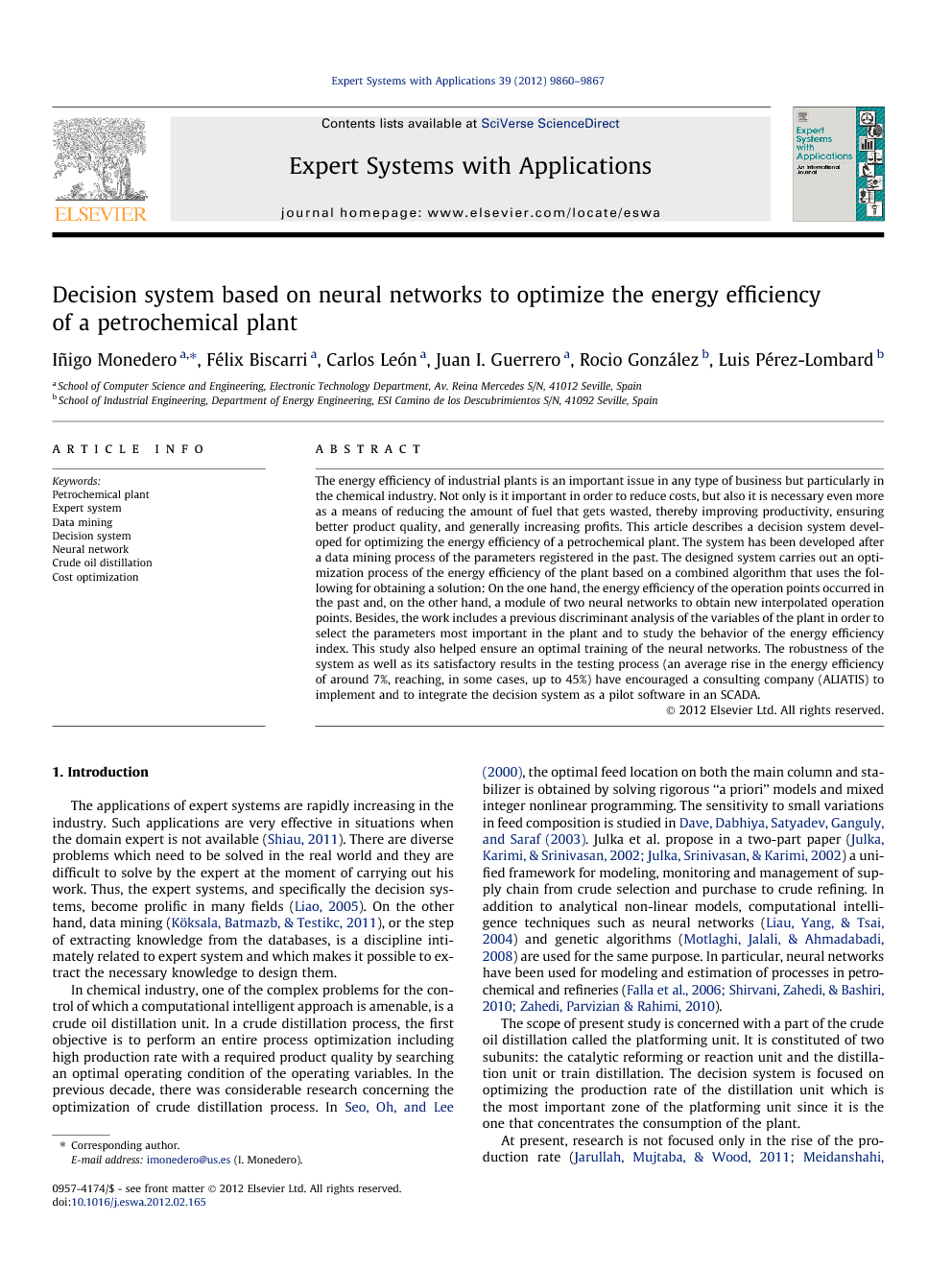 The energy efficiency of industrial plants is an important issue in any type of business but particularly in the chemical industry. Not only is it important in order to reduce costs, but also it is necessary even more as a means of reducing the amount of fuel that gets wasted, thereby improving productivity, ensuring better product quality, and generally increasing profits. This article describes a decision system developed for optimizing the energy efficiency of a petrochemical plant. The system has been developed after a data mining process of the parameters registered in the past. The designed system carries out an optimization process of the energy efficiency of the plant based on a combined algorithm that uses the following for obtaining a solution: On the one hand, the energy efficiency of the operation points occurred in the past and, on the other hand, a module of two neural networks to obtain new interpolated operation points. Besides, the work includes a previous discriminant analysis of the variables of the plant in order to select the parameters most important in the plant and to study the behavior of the energy efficiency index. This study also helped ensure an optimal training of the neural networks. The robustness of the system as well as its satisfactory results in the testing process (an average rise in the energy efficiency of around 7%, reaching, in some cases, up to 45%) have encouraged a consulting company (ALIATIS) to implement and to integrate the decision system as a pilot software in an SCADA.

The applications of expert systems are rapidly increasing in the industry. Such applications are very effective in situations when the domain expert is not available (Shiau, 2011). There are diverse problems which need to be solved in the real world and they are difficult to solve by the expert at the moment of carrying out his work. Thus, the expert systems, and specifically the decision systems, become prolific in many fields (Liao, 2005). On the other hand, data mining (Köksala, Batmazb, & Testikc, 2011), or the step of extracting knowledge from the databases, is a discipline intimately related to expert system and which makes it possible to extract the necessary knowledge to design them. In chemical industry, one of the complex problems for the control of which a computational intelligent approach is amenable, is a crude oil distillation unit. In a crude distillation process, the first objective is to perform an entire process optimization including high production rate with a required product quality by searching an optimal operating condition of the operating variables. In the previous decade, there was considerable research concerning the optimization of crude distillation process. In Seo, Oh, and Lee (2000), the optimal feed location on both the main column and stabilizer is obtained by solving rigorous “a priori” models and mixed integer nonlinear programming. The sensitivity to small variations in feed composition is studied in Dave, Dabhiya, Satyadev, Ganguly, and Saraf (2003). Julka et al. propose in a two-part paper (Julka et al., 2002 and Julka et al., 2002) a unified framework for modeling, monitoring and management of supply chain from crude selection and purchase to crude refining. In addition to analytical non-linear models, computational intelligence techniques such as neural networks (Liau, Yang, & Tsai, 2004) and genetic algorithms (Motlaghi, Jalali, & Ahmadabadi, 2008) are used for the same purpose. In particular, neural networks have been used for modeling and estimation of processes in petrochemical and refineries (Falla et al., 2006, Shirvani et al., 2010 and Zahedi et al., 2010). The scope of present study is concerned with a part of the crude oil distillation called the platforming unit. It is constituted of two subunits: the catalytic reforming or reaction unit and the distillation unit or train distillation. The decision system is focused on optimizing the production rate of the distillation unit which is the most important zone of the platforming unit since it is the one that concentrates the consumption of the plant. At present, research is not focused only in the rise of the production rate (Jarullah et al., 2011 and Meidanshahi et al., 2011) but also in the improvement of product quality (Iranshahi et al., 2011 and Rahimpour et al., 2011). In this sense, classical applications of linear control theories on the distillation unit are widely available in the literature (Jabbar & Alatiqi, 1997). Also nonlinear state estimation research (Jana, Samanta, & Ganguly, 2009) and optimal planning strategy research (Kuo & Chang, 2008) are available. The main objective of these papers was to remove impurities in the distillate (i.e., View the MathML sourceC5+ in the debutanizer column) and maintain the minimum possible amount of product (butane) in the bottom residual fuel oil to maximize the yield of the product. The aim of our work is to perform a plant energy process optimization, including an adequate production rate with the required product quality but minimizing operating cost (fuel consumption in boilers) through a data mining approach. Several research endeavors have treated consumption analysis as a knowledge discovery problem using intelligence techniques (Li, Bowers, & Schnier, 2010). In De Silva, Yu, Alahakoon, and Holmes (2011), the authors proposed an interesting Incremental Summarization and Pattern Characterization (ISPC) framework for data mining, intelligent analysis and prediction of energy consumption based on electricity meter readings. Both forms of learning, supervised and unsupervised, have been adopted in these studies (Hippert et al., 2001 and Metaxiotis et al., 2003). In Hippert et al. (2001), the unsupervised learning based on the SOM algorithm for the three tasks, namely classification, filtering and identification, of customer load pattern is proposed. Clustering has also been successful in industry applications of data stream mining, such as in Iglesias, Angelov, Ledezma, and Sanchis (2011). The intelligent control algorithms applied to the control of combustion processes have produced satisfactory results and show a great potential for growth. Previous research has shown that boiler efficiency can be optimized with data-mining approaches (Miyayama et al., 1991 and Ogilvie, Swidenbank, & Hogg, 1998). In Kusiak and Song (2006), authors proposed an optimization with clustering-derived centroids. In Song and Kusiak (2007), authors develop a data mining approach for optimizing the combustion efficiency of an electric-utility boiler subject to industrial operating constraints. Latest cited papers offer interesting researches about single boilers. These studies encouraged the authors of the current paper to offer a mining approach to optimize the efficiency of a complete distillation plant, minimizing the operating and economical constraints. Due to a close monitoring in real-time of the process is, in practice, rarely available, only information collected into an historical database and the data mining software tools were used. The expert’s performance is hidden in the collected dataset. This valuable knowledge feeds the proposed decision support system framework. It is not necessary that the global plant control model be reconfigured; the expert’s information can simply be extracted. The question that emerges is: Is it possible to extract expert information from the limited amount of data collected in the historical database, searching in past data optimal cost operating conditions? And is it possible to improve energy efficiency by the estimation of new operating condition with a decision system software tool? In this work, we present a decision system, designed through a data mining process, based on an algorithm which integrates a module of neural networks. Besides, a pilot commercial software with the system already integrated is also presented.

The present work describes the design and development of a combined decision system based on a module of neural networks for the optimization of the consumption of a petrochemical plant. The algorithm, which is based on the system, uses the information relative to the parameters registered for the plant help with a neural network module for optimizing its future operation points. Thus, this algorithm helps the operator to take decisions to improve the energy efficiency of the plant. On the other hand, a bibliographical revision of works with the same objective has been carried out. We have checked, as the use of the neural network is not everything that should be extended in the chemical industry for our particular purpose. This kind of neural structure is demonstrated as having an excellent behavior in a similar type of interpolation problems when it counts with historical data of the plant and a great number of input variables. The system implements a kernel based on two backpropagation neural networks. The main contribution of our work is how to combine the historic data of a plant with a neural network structure for generating new interpolated operation points and so to generate a decision system for the operator. There are two advantages of this model: – It is a system generated on real conditions of operation. Thus, the use of an interpolation algorithm as neural networks is only for linking the operation point in the present with operation points that had already happened in the past. This fact ensures results that are not only theoretical but also eminently practical. – It is system that can be constantly improved. This is due to the fact that the new conditions and operation points can be used to train and adjust the neural networks. Besides, the work presented in this article has been implemented and integrated in an SCADA by a consulting company. Thus, the results obtained so far are considered satisfactory taking into account the limitation of the available data for the plant. In fact, the system attains an average improvement of around 15% for the plant, which is very significant from the previous company process. Besides, these results will be improvable in the future by means of a refinement of the developed neural networks.