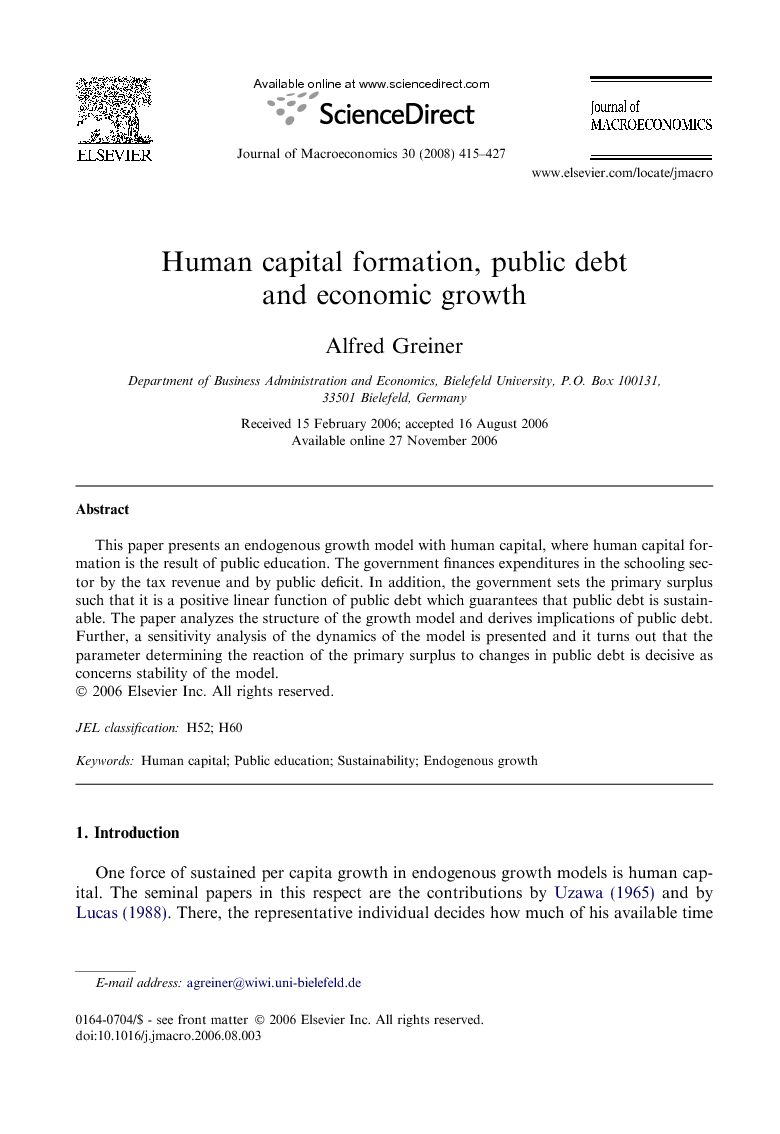 This paper presents an endogenous growth model with human capital, where human capital formation is the result of public education. The government finances expenditures in the schooling sector by the tax revenue and by public deficit. In addition, the government sets the primary surplus such that it is a positive linear function of public debt which guarantees that public debt is sustainable. The paper analyzes the structure of the growth model and derives implications of public debt. Further, a sensitivity analysis of the dynamics of the model is presented and it turns out that the parameter determining the reaction of the primary surplus to changes in public debt is decisive as concerns stability of the model.

One force of sustained per capita growth in endogenous growth models is human capital. The seminal papers in this respect are the contributions by Uzawa (1965) and by Lucas (1988). There, the representative individual decides how much of his available time is spent for producing physical output and how much is used for the formation of human capital. Rebelo (1991) extended this class of models by assuming that both physical capital and human capital enter the production process of human capital, in contrast to the model by Uzawa and Lucas who posit that human capital formation is the result of human capital input alone. However, neither of theses models allows for public spending in the process of human capital formation. Contributions, which take into account that the public sector can stimulate the formation of human capital by devoting public resources to schooling, are for example Glomm and Ravikumar, 1992, Ni and Wang, 1994, Beauchemin, 2001 and Blankenau and Simpson, 2004. In those contributions, human capital accumulation results either from both private and public services, as in Glomm and Ravikumar and in Blankenau, or from public spending alone, as in Ni and Wang and in Beauchemin. As concerns the empirical relevance of human capital, there is evidence that education is positively correlated with income growth. At the microeconomic level the positive correlation seems to be quite robust. On the macroeconomic level the findings are more fragile (cf. Krueger and Lindahl, 2001) which, however, may be due to measurement errors. So, Krueger and Lindahl demonstrate that cross-country regressions indicate that the change in education is positively correlated with economic growth if measurement errors are accounted for. Further, Levine and Renelt (1992) have shown that human capital, measured by the secondary enrollment rate, is a robust variable in growth regressions, so that building endogenous growth models with human capital as the engine of growth seems to be justified. When the government can influence the process of human capital formation by adequate expenditures, it may finance these measures by the tax revenue and by public deficits. As concerns deficit finance of productive public spending in endogenous growth models with an infinitely lived representative individual, one realizes that a deficit financed increase in public spending leads to higher long-run growth (see e.g., Turnovsky, 1995, p. 418). The reason for this outcome is that deficit finance of the government does not have any distortions in the model with an infinitely lived individual. Consequently, the growth stimulating effect of higher productive spending dominates and leads to a higher balanced growth rate. Of course, this result is independent of whether the government finances human capital or public infrastructure as long as these variables foster economic growth. However, this outcome changes if budgetary regimes are introduced into the model as in Greiner and Semmler (2000) and in Gosh and Mourmouras (2004). Budgetary regimes are rules to which the government must stick and they imply feedback effects of higher public debt, so that a deficit financed increase in public investment may lead to a smaller growth rate in the long-run. Although intuitive and realistic, integrating such budgetary regimes in economic models may seem to be ad hoc. Another way of bringing a feedback effect of higher public debt into economic models is to assume that the primary surplus is a positive linear function of public debt, as ratio to GDP, respectively. Then, deficits today lead to a rise of the primary surplus in the future, implying that the government has less scope for other, productive, spending. The motivation for this rule was provided by Bohn, 1995 and Bohn, 1998 who showed that this policy guarantees that public debt remains sustainable and who also found empirical evidence for this rule in the US. In Greiner (2007), a similar assumption was integrated in an endogenous growth model with public capital. There, the question of how much of the tax revenue must be used for the debt service as well as effects of fiscal policy for the model on the balanced growth path and particularly for the model on the transition path have been analyzed. In this paper, we present an endogenous growth model with human capital formation where the government plays a decisive role by financing school expenditures. In addition, we allow for deficit finance of the government which has not been done in endogenous growth models with human capital, as far as we know. Yet deficit financing is common in real economies and will have effects as concerns human capital accumulation when the government pays for educational spending. Further, we posit that the primary surplus-GDP ratio is a positive linear function of the debt-GDP ratio so that public debt is sustainable. We are interested in growth effects and in the dynamics of our model. The rest of the paper is organized as follows. In Section 2, we present the structure of our growth model. In Section 3, we derive implications of our model as concerns public debt and economic growth and Section 4, finally, concludes.

This paper has presented an endogenous growth model with human capital where the government finances educational spending which fosters the formation of human capital. The government may run deficits but it has to increase the primary surplus as public debt rises so that the path of public debt remains sustainable. The analysis has demonstrated that a loose fiscal policy, where the government does not pay great attention to stabilizing debt, does not permit sustained growth in the long-run, unless the government is a creditor. In this case, there is a crowding-out of private investment and sustained growth is not feasible, unless the government is a creditor and lends to the private sector, so that the latter can finance necessary investment in physical capital. On the other hand, if the government puts a large weight on debt stabilization and does not invest sufficiently in the formation of human capital, sustained growth is not possible either, unless the government is again a creditor. In this case, the government must use its wealth in order to finance necessary investment in the formation of human capital. As concerns stability, our analysis has shown that a strong rise in the primary surplus as a reaction to higher public debt stabilizes the economy. In addition, we have seen that for certain values of the reaction coefficient, cyclical growth occurs. If the reaction coefficient is set to a larger value, the economy stabilizes and converges to the constant balanced growth rate, if the reaction coefficient is set to a lower value, the economy becomes unstable. A final remark refers to the relation between public deficits and primary surpluses. As our considerations have shown, a linear increase in the primary surplus as response to higher public debt is sufficient for public debt to be sustainable. This is remarkable since it is more general than the Ricardian equivalence theorem. As concerns the question of how the government can achieve an increase in the primary surplus the Ricardian equivalence theorem which, roughly speaking, states that public deficits today imply higher taxes tomorrow, is just one possibility to raise the primary surplus. Another possibility is to keep taxes constant and to shift resources from other types of public spending to the debt service, as we assumed in this paper. Finally, in real economies an increase in the primary surplus may also be the result of higher tax revenues due to higher GDP growth which is the most desirable case because then neither taxes have to be increased nor public spending must be decreased. It should be noted that in a stochastic economy, the latter does not necessarily imply that the economy is dynamically inefficient.