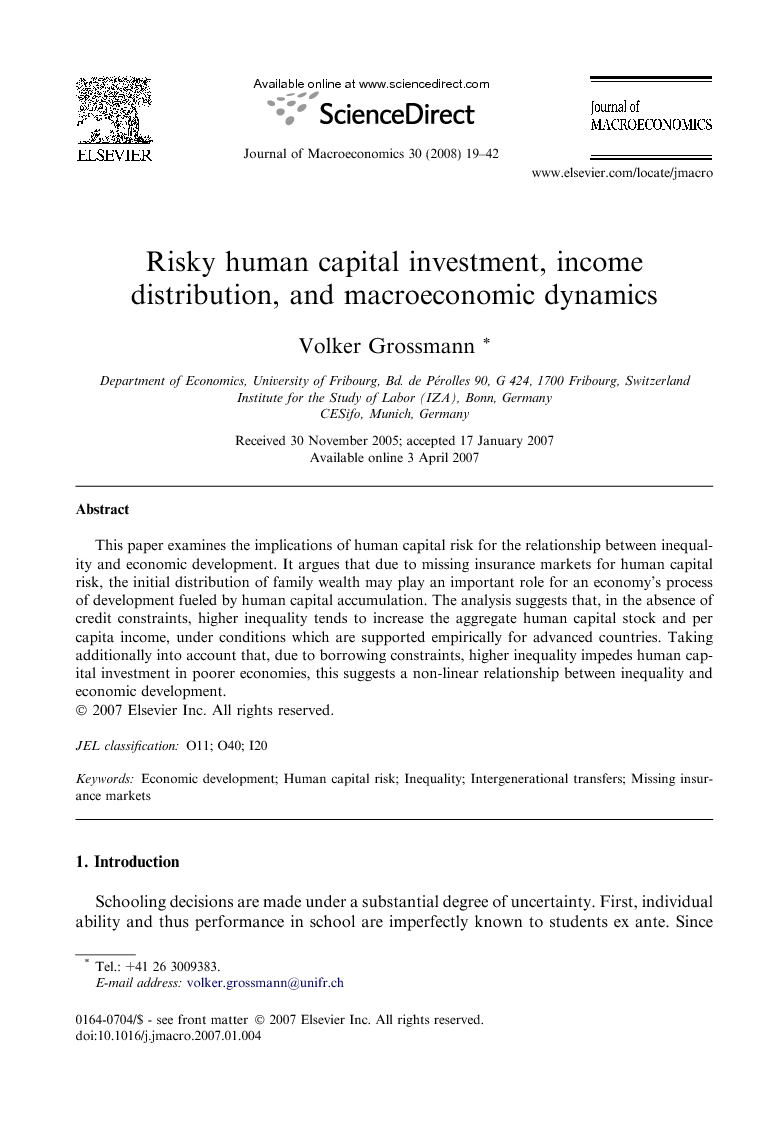 This paper examines the implications of human capital risk for the relationship between inequality and economic development. It argues that due to missing insurance markets for human capital risk, the initial distribution of family wealth may play an important role for an economy’s process of development fueled by human capital accumulation. The analysis suggests that, in the absence of credit constraints, higher inequality tends to increase the aggregate human capital stock and per capita income, under conditions which are supported empirically for advanced countries. Taking additionally into account that, due to borrowing constraints, higher inequality impedes human capital investment in poorer economies, this suggests a non-linear relationship between inequality and economic development.

Schooling decisions are made under a substantial degree of uncertainty. First, individual ability and thus performance in school are imperfectly known to students ex ante. Since school performance is an important determinant of labor market performance, this source of uncertainty transmits into earnings risk. Second, there is uncertainty about the quality of schooling, due to substantial heterogeneity among schooling institutions which may only partly be known ex ante. Third, and maybe most important, one’s relative position in the post-school earnings distribution is uncertain because unforeseen patterns of technological change and product demand shifts are not neutral across industries. Since skills are to a large degree specific to industries, this leads to uncertainty about relative labor demand within groups of workers with similar education levels (e.g., a college degree). Empirical evidence indeed strongly suggests that “there is a great deal of uncertainty regarding the returns to schooling” (Carneiro et al., 2003, p. 362).1 Since human capital risk is typically neither insurable nor diversifiable, uncertainty in the returns to education may be a dominant concern for individuals in their schooling decision, in addition to expected returns. This paper builds on the premise that risk-averse individuals face idiosyncratic, non-diversifiable and uninsurable labor income risk associated with human capital investments and analyzes its implications for the interaction between intergenerational wealth transmission of heterogeneous individuals and economic development. It is argued that due to missing insurance markets for human capital risk, the initial distribution of family wealth (or parental income, respectively) may play an important role for an economy’s process of development fueled by human capital accumulation. To focus on the role of missing insurance markets for human capital risk, the analysis mostly abstracts from constraints to borrow for educational purposes. This seems a reasonable modelling device for the analysis of advanced countries, where extensive provisions of college financial aid (like in the US) or public education finance (prevalent in Europe) tend to remove credit constraints for human capital investments for the bulk of individuals. In fact, recent studies find no evidence for the relevance of educational borrowing constraints in the US (see e.g. Cameron and Taber, 2004, and the references therein). Nevertheless, empirical evidence strongly suggests that parents’ income is an important determinant of human capital investments. For instance, Taubman (1989) reviews estimates for the elasticity of years of schooling with respect to parental income. These are generally positive and range from 3% to 80%, after controlling for parents’ education, father’s occupation, and/or children’s test scores on mental ability tests. Similarly, Solon (1999, p. 1789) concludes: “Most of the evidence […] indicates that intergenerational earnings elasticities are substantial and are larger than we used to think.” Sacerdote (2002) finds that the effect of socioeconomic status on children’s college attendance is just as large for adoptees as for children raised by biological parents, suggesting no significance of genetic factors. Plug and Vijverberg (2003) report higher effects of genetic factors (measured by parents’ IQ) on the children’s years of schooling and college attainment, although family income still has a large effect. The present framework is consistent with such evidence. It is shown that educational investment at the individual level positively depends on family wealth under standard assumptions, even in the absence of credit constraints or heterogeneity in ability. This suggests a potential role of wealth inequality for macroeconomic dynamics. The main purpose of this study is to characterize this role in terms of observable micro-relations. Therefore, apart from some illustrative examples, the utility function and education technology are held quite general. For instance, the analysis suggests that higher inequality tends to increase the aggregate human capital stock and per capita income when the individual marginal propensity to save (MPS) for intergenerational transfers is increasing in individual income and the expected return to education is non-diminishing. These conditions are supported empirically for the US. For instance, in a recent paper, Dynan et al. (2004) show that the MPS is increasing in lifetime income (see also Menchik and David, 1983). Moreover, the bulk of individuals does not seem to acquire human capital at levels where returns to education are diminishing, according to a survey by Card (1999). For developing countries, there is wide agreement that credit constraints are an important obstacle to human capital formation. Taking this additionally into account, the macroeconomic predictions of the model are consistent with evidence by Barro (2000). According to his study, there is no significant relationship between inequality and growth in a broad sample of countries. However, splitting up the sample in relatively poor and relatively rich countries, the relationship is negative in the former and positive in the latter subsample.2 The paper is organized as follows. Section 2 discusses the related literature. Section 3 sets up the model. Section 4 analyzes individual decisions and discusses existence and stability of stationary equilibria of the dynamical system. Section 5 examines the role of inequality for aggregate income dynamics in terms of observable micro-relations. It distinguishes the short-run, medium-run and long-run, and provides illustrative examples of the general analysis. Section 6 discusses the results of the paper in the light of empirical evidence on micro- and macro-relations relevant in the present context. The last section concludes. All proofs are relegated to an appendix.

The growth literature has recently emphasized the dominant role of human capital for the process of development (e.g. Glaeser et al., 2004). Human capital formation itself depends on individual education decisions, which are subject to and affected by considerable risk. This paper has examined the implications of human capital risk for the role of inequality on the process of economic development fueled by private education investments. It has demonstrated that the initial distribution of family wealth may play an important role for development even when there are no credit constraints, due to missing insurance markets for human capital risk. The analysis suggests that – when the marginal propensity to save for intergenerational transfers is increasing in income and credit-constraints can be neglected, as supported by evidence for advanced countries – higher inequality tends to increase the aggregate human capital stock in the process of development. However, for developing economies where borrowing constraints are an important obstacle for human capital investment of poorer individuals, higher inequality tends to impede the macroeconomic performance. Overall, and consistent with recent evidence, this suggests that higher initial inequality slows down growth in earlier stages of development but has positive growth effects in mature stages of development. It is important to note that even under a positive relationship between inequality and macroeconomic performance, the proposed theory does not suggest a rationale for inegalitarian policies. This is because in a small open economy there is no “trickle-down” from growth to wages. Hence, an equity-growth trade-off may arise. To examine the role of redistributive taxation for growth by taking into account interactions between intergenerational wealth transmission and educational investments under human capital risk would thus be an interesting topic for future research. Another interesting question is how the impact of a reduction in human capital risk (possibly via public policy) on the aggregate human capital stock depends on the degree of inequality in an economy.