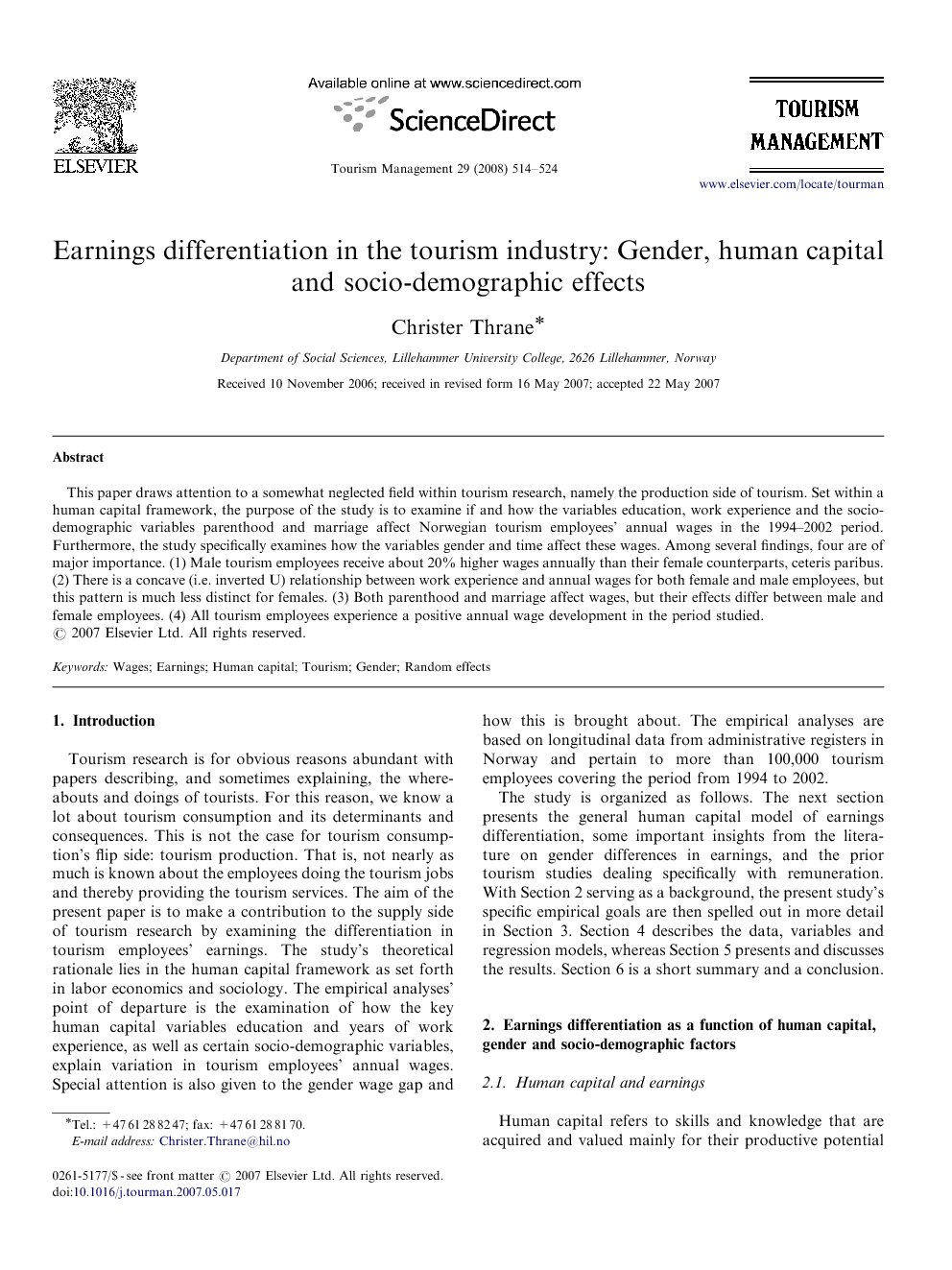 This paper draws attention to a somewhat neglected field within tourism research, namely the production side of tourism. Set within a human capital framework, the purpose of the study is to examine if and how the variables education, work experience and the socio-demographic variables parenthood and marriage affect Norwegian tourism employees’ annual wages in the 1994–2002 period. Furthermore, the study specifically examines how the variables gender and time affect these wages. Among several findings, four are of major importance. (1) Male tourism employees receive about 20% higher wages annually than their female counterparts, ceteris paribus. (2) There is a concave (i.e. inverted U) relationship between work experience and annual wages for both female and male employees, but this pattern is much less distinct for females. (3) Both parenthood and marriage affect wages, but their effects differ between male and female employees. (4) All tourism employees experience a positive annual wage development in the period studied.

Tourism research is for obvious reasons abundant with papers describing, and sometimes explaining, the whereabouts and doings of tourists. For this reason, we know a lot about tourism consumption and its determinants and consequences. This is not the case for tourism consumption's flip side: tourism production. That is, not nearly as much is known about the employees doing the tourism jobs and thereby providing the tourism services. The aim of the present paper is to make a contribution to the supply side of tourism research by examining the differentiation in tourism employees’ earnings. The study's theoretical rationale lies in the human capital framework as set forth in labor economics and sociology. The empirical analyses’ point of departure is the examination of how the key human capital variables education and years of work experience, as well as certain socio-demographic variables, explain variation in tourism employees’ annual wages. Special attention is also given to the gender wage gap and how this is brought about. The empirical analyses are based on longitudinal data from administrative registers in Norway and pertain to more than 100,000 tourism employees covering the period from 1994 to 2002. The study is organized as follows. The next section presents the general human capital model of earnings differentiation, some important insights from the literature on gender differences in earnings, and the prior tourism studies dealing specifically with remuneration. With Section 2 serving as a background, the present study's specific empirical goals are then spelled out in more detail in Section 3. Section 4 describes the data, variables and regression models, whereas Section 5 presents and discusses the results. Section 6 is a short summary and a conclusion.

Tourism is an important and growing industry in the world economy. As such, the relative lack of labor market studies in tourism, as opposed to studies of tourists, is somewhat puzzling. This paper has made an effort to balance this issue more evenly by examining one important aspect of Norwegian tourism employees’ labor market outcomes, namely their earnings. Set within the human capital framework developed by Becker (1962) and Becker (1975) and Mincer (1974), the empirical research questions concerned how the human capital variables education and work experience, as well as the socio-demographic variables parenthood and marriage, affected tourism employee's annual wages. Furthermore, particular attention was devoted to how gender and time was associated with these wages. In terms of annual wages in the 1994–2002 period taken as a whole, the male tourism employees made about 20% more than the female ones, ceteris paribus. This difference is in agreement with the gender wage gap reported in a number of previous studies. A natural question then arises as to why is this the case. According to several scholars, men generally receive higher earnings than women because they are over-represented in occupations and occupational positions that pay better, and/or more typically are employed in industries, sectors, establishments or firms with higher mean wages (Blau & Kahn, 2006; Gunderson, 2006; Meyersson Milgrom & Petersen, 2006; Petersen & Morgan, 1995; Weinberger, 1998). In other words, once the wage regressions include variables controlling for these features, the gender coefficient becomes small and (perhaps) insignificant. Still, recent research also reports a non-trivial and significant gender coefficient when the above-mentioned controls are taken into account, indicating discrimination against women (Bayard et al., 2003; Datta Gupta & Rothstein, 2005; Santos & Varejăo, 2006). Thus, future research on matched employer–employee data is called for in order to settle this score more definitively for tourism employees.8 The human capital variables education and work experience are important determinants of tourism employees’ annual wages. Based on the several hundreds of prior Mincer regressions reported in the literature, this is also as expected. Investments in education pay off even in Norway, a country that, in a comparative perspective, is known for its general low returns to education (Harmon, Walker, & Westegard-Nielsen, 2001). It is also interesting to note that educational investments appear to be more profitable for female tourism employees compared with male ones. This finding is contrary to those of Bañuls and Rodríguez's (2005) study of Spanish tourism employees, but in accordance with Dougherty's (2005) more general findings. For work experience the results support the concave experience–earnings relationship. That is, wages rise steeply immediately after career entry when the human capital investments are at their most intense, level off during midlife, and finally decrease at older ages. However, female employees’ earnings trajectories are flatter than men's (cf. Fig. 1). Part of the reason for this gender difference is that female tourism employees marry and/or have children at some point during the first part of their working life, and this interruption stalls their accumulation of human capital. Indeed, this is exactly what the life-cycle human capital model predicts (Ben-Porath, 1967; Polachek, 2006). Although parenthood and marriage are parts of the explanation for the gender-specific experience–earnings relationship, it is important to note that these choices by themselves also are associated with annual wages. According to the results of this study, parenthood is non-beneficial in terms of personal earnings for female tourism employees, whereas the opposite is the case for males. Furthermore, marriage appears to be less beneficial in terms of wages for women. A statement by Polachek (2006, p. 109) is here worth quoting: “For men, marriage and children are associated with more work, whereas for women, marriage and children are associated with less work.” Concerning the effects of parenthood and marriage, the results of this study could just as easily be summed up by simply adding to this (in italics): For men, marriage and children are associated with more work and, thus, higher earnings, whereas for women, marriage and children are associated with less work and, thus, lower earnings. It should be noted, however, that the question of causality with respect to the variables parenthood and marriage is unresolved, and that future research should address this more explicitly. The tourism employees followed in this study all experienced a positive wage development in the period from 1994 to 2002. In conclusion, this study has clearly demonstrated that human capital as well as socio-demographic variables and time are important determinants of Norwegian tourism employees’ annual wages. In addition, the study has shown that an employee's gender continues to play an important role in terms of the wage he or she receives.