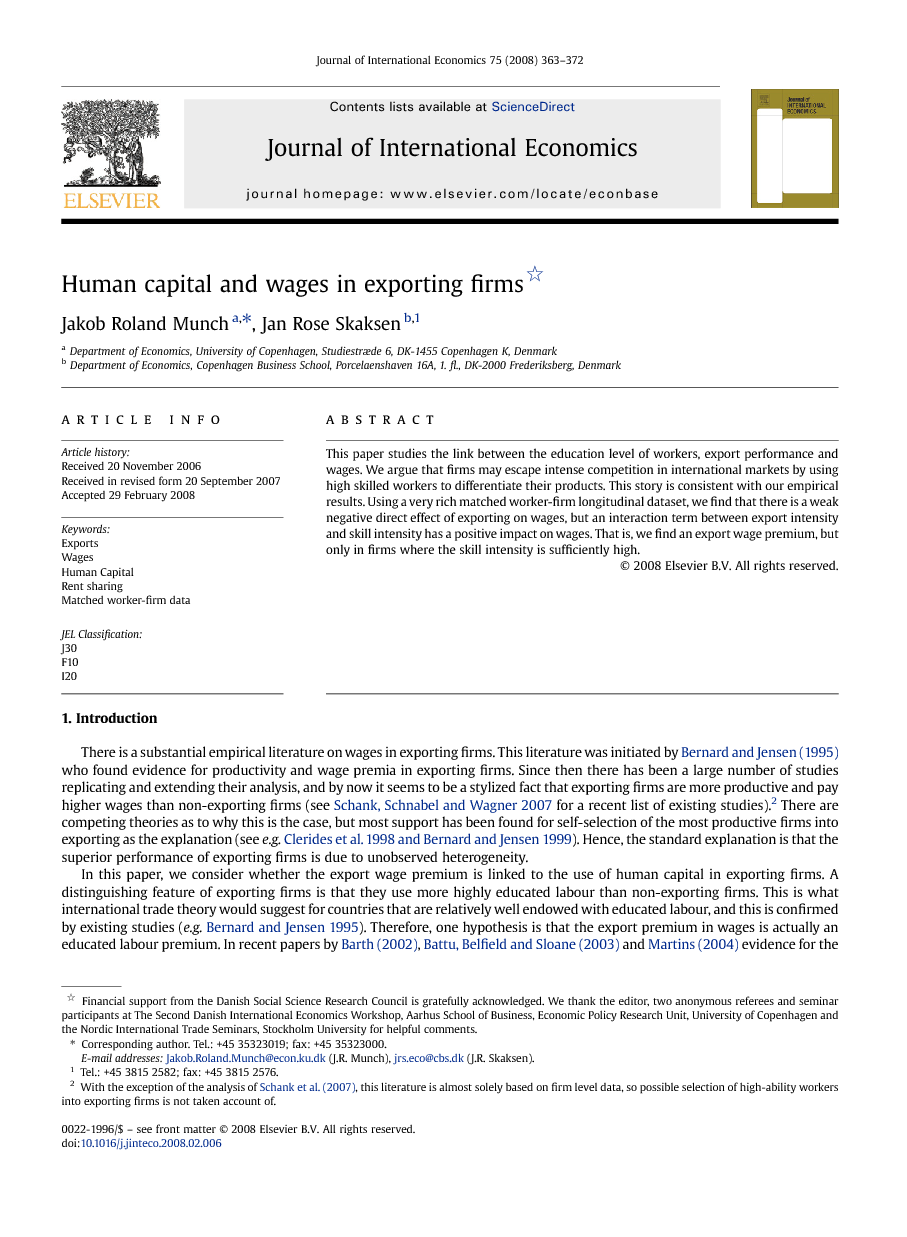 This paper studies the link between the education level of workers, export performance and wages. We argue that firms may escape intense competition in international markets by using high skilled workers to differentiate their products. This story is consistent with our empirical results. Using a very rich matched worker-firm longitudinal dataset, we find that there is a weak negative direct effect of exporting on wages, but an interaction term between export intensity and skill intensity has a positive impact on wages. That is, we find an export wage premium, but only in firms where the skill intensity is sufficiently high.

There is a substantial empirical literature on wages in exporting firms. This literature was initiated by Bernard and Jensen (1995) who found evidence for productivity and wage premia in exporting firms. Since then there has been a large number of studies replicating and extending their analysis, and by now it seems to be a stylized fact that exporting firms are more productive and pay higher wages than non-exporting firms (see Schank, Schnabel and Wagner 2007 for a recent list of existing studies).2 There are competing theories as to why this is the case, but most support has been found for self-selection of the most productive firms into exporting as the explanation (see e.g. Clerides et al., 1998 and Bernard and Jensen, 1999). Hence, the standard explanation is that the superior performance of exporting firms is due to unobserved heterogeneity. In this paper, we consider whether the export wage premium is linked to the use of human capital in exporting firms. A distinguishing feature of exporting firms is that they use more highly educated labour than non-exporting firms. This is what international trade theory would suggest for countries that are relatively well endowed with educated labour, and this is confirmed by existing studies (e.g.Bernard and Jensen 1995). Therefore, one hypothesis is that the export premium in wages is actually an educated labour premium. In recent papers by Barth (2002), Battu, Belfield and Sloane (2003) and Martins (2004) evidence for the existence of human capital externalities at the work place level is found, i.e., the wage level in firms using more educated labour increases beyond the level explained by the individual educational attainment. Thus the exporting variable may pick up such spillover effects of education, if they are not properly accounted for in the wage equation. An alternative hypothesis we consider is that there is an export premium in wages, but this premium interacts with the education level in firms. That is, the export wage premium is higher in firms using more educated labour. The existence of a link between the skill level, international trade and wages has been suggested by Schott (2004). He documents that firms producing unskilled labour intensive goods are more likely to be in direct competition with firms from low wage countries in international markets. Therefore, a higher skill intensity in exporting firms may mitigate the effect of competition from low income countries, and, if there is rent-sharing between firms and workers, this lower level of competition may turn into higher wages (e.g. Dowrick, 1989 and Slaughter, 2001). This paper can be seen as combining the literature on the exporting wage premium with insights from the literature on human capital externalities. The evidence on the existence of human capital externalities are mixed. For example Acemoglu and Angrist (2000) find no impact of average skill levels on average wages in US states, while Moretti (2004) reports a significant positive impact of the share of graduates in US cities on individual worker wages. In the present context we are interested in human capital spillovers at the firm level, and these may be particularly important because it is likely that individuals interact more and learn more from each other at this level compared to the city or region level. As mentioned, a few papers have recently found evidence of positive externalities at the firm level. Using a Norwegian panel data set of workers, Barth (2002) documents a significant effect of firm average level of education, while using cross sectional data for the UK, Battu, Belfield and Sloane (2003) find positive firm level external returns on individual wages. Martins (2004) uses a panel of Portuguese firms to also document substantial social returns to firm level education. We have access to a unique matched worker-firm panel data set with information about firms' export behavior. Our empirical approach is to analyze how wages of otherwise similar individuals depend on the export intensities and shares of highly educated workers in otherwise similar firms. In contrast to most of the literature on exporting wage premia, our data set allows us to control for observed and unobserved individual and firm characteristics such as ability of workers and productivity of the firm that are correlated with wages and export status of firms. It is likely that more productive firms select into being exporters, and high-quality workers sort into exporting firms. For example highly productive exporting firms may reward observed and unobserved abilities better than less productive non-exporting firms, causing high-ability workers to select into exporting firms. In this case, the observed exporting wage premium might simply be due to differences in observed and unobserved worker and/or firm characteristics. In our empirical analysis, we find that there is only a wage premium from exporting in firms where the skill intensity is sufficiently high, and the size of the export premium is increasing in the skill intensity of the firm. Moreover, when distinguishing between different types of labour, these effects are only found in wages of the least educated workers, whereas wages of workers with a further education are unaffected by the skill intensity and export intensity of the firm. The rest of the paper is structured as follows. In the following section, we offer some theoretical considerations about the link between wages, education and exporting. In Section 3, we describe the data set. In Section 4 we specify the empirical model and present the estimation results. Finally, in Section 5 we conclude.

In this paper we have explored the relationship between a firm's education level, export performance and wages of its workers. We have offered a brief discussion of the possible theoretical underpinning. We argue that firms may escape intense competition in international markets by using high skilled workers to undertake or improve innovation, design or branding and thereby differentiate their products. Lower product market competition, in turn, is likely to spill over into wages if there is rent-sharing between workers and firms. That is, we should find a positive association between a firm's share of educated labour and wages of the workers. Using a very rich matched worker firm longitudinal dataset we first consider two separate results from the existing literature. First, when only controlling for observed worker and firm heterogeneity, we find that firms with higher export intensities pay higher wages. However, when also controlling for unobserved worker and firm heterogeneity, no export variable has significant effects on wages. Second, in line with a small literature on firm-level human capital externalities, we find that the firm level skill intensity increases wages in the firm. This indicates that interaction with high skilled workers at the workplace may lead to learning and higher productivity and wages for others. Our main result is that inclusion of an interaction term between the export intensity and the proportion of educated workers at the firm level enters the wage equation with a significant positive effect. In addition, the skill intensity no longer has a significant impact on wages, and the export intensity has a weak negative effect on wages. Hence, a higher export intensity in firms with a very low skill intensity implies that wages fall — while a higher export intensity in firms where the skill intensity is high leads to higher wages. These results support the hypothesis that exporting firms may escape intense competition from low wage countries in international markets by using more skilled labour. Our results also show that it is only for the least educated workers that the interaction term has a significant effect on wages. Workers with further education appear to be unaffected.