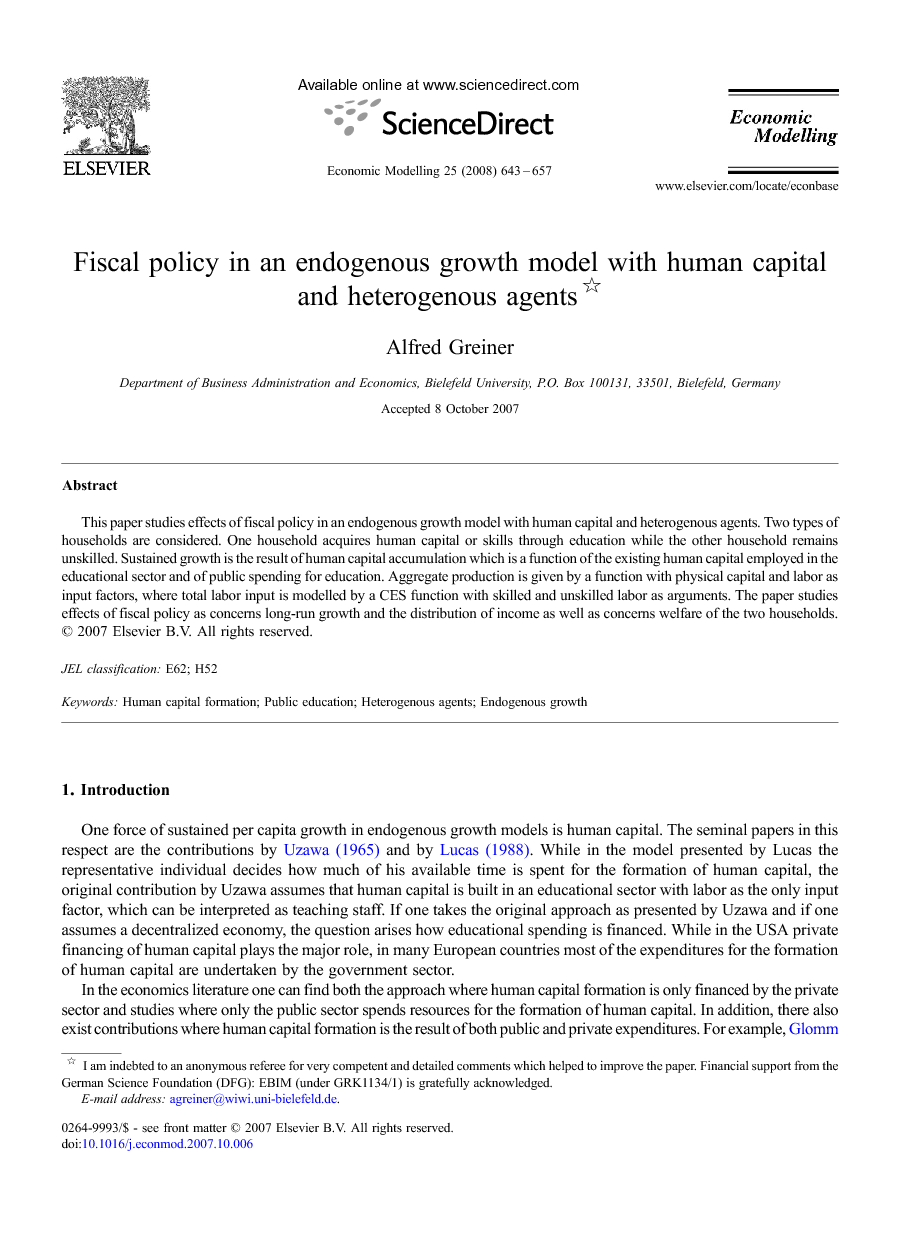 This paper studies effects of fiscal policy in an endogenous growth model with human capital and heterogenous agents. Two types of households are considered. One household acquires human capital or skills through education while the other household remains unskilled. Sustained growth is the result of human capital accumulation which is a function of the existing human capital employed in the educational sector and of public spending for education. Aggregate production is given by a function with physical capital and labor as input factors, where total labor input is modelled by a CES function with skilled and unskilled labor as arguments. The paper studies effects of fiscal policy as concerns long-run growth and the distribution of income as well as concerns welfare of the two households.

In this paper we have presented an endogenous growth model with heterogenous agents and human capital, where human capital is the result of public spending for education and of teachers, i.e. human capital, hired by the government. The labor input in the aggregate production function is modelled by a CES function. There exist positive spill-over effects of human capital in the production function which makes unskilled labor benefit from human capital accumulation of skilled labor. The analysis of fiscal policy in this model has demonstrated that, among other things, there may be over-accumulation of human capital due to too much human capital employed in the educational sector. Further, we could show that a rise of human capital employed in the educational sector raises (reduces) income inequality if the elasticity of substitution between skilled and unskilled labor is relatively small (large). Finally, we demonstrated that growth and welfare maximization may be different goals. So, there may exist a welfare maximizing labor income tax rate even when a higher labor income tax rate always raises the balanced growth rate. It should be mentioned that all of our results were derived for exogenously given labor supplies. While the assumption of an exogenously given supply of unskilled labor may be justified, this does not necessarily hold for skilled labor. So, it would be interesting to make labor supply an endogenous variable. But given that labor input is modelled by a CES function with skilled and unskilled labor as arguments, the analysis with an endogenous labor supply is far from trivial and results may only be attainable for numerical examples. Such an analysis, however, is left for future research.