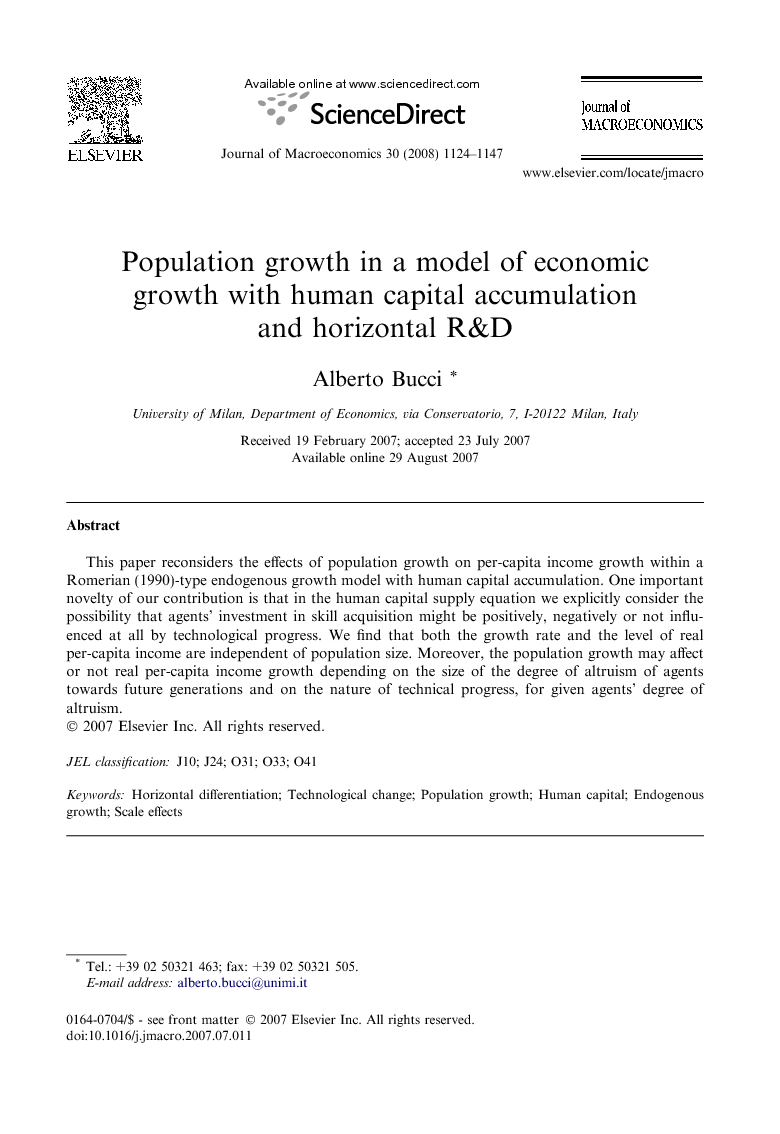 This paper reconsiders the effects of population growth on per-capita income growth within a Romerian (1990)-type endogenous growth model with human capital accumulation. One important novelty of our contribution is that in the human capital supply equation we explicitly consider the possibility that agents’ investment in skill acquisition might be positively, negatively or not influenced at all by technological progress. We find that both the growth rate and the level of real per-capita income are independent of population size. Moreover, the population growth may affect or not real per-capita income growth depending on the size of the degree of altruism of agents towards future generations and on the nature of technical progress, for given agents’ degree of altruism.

Since the early 18th century world population has considerably increased to over 6 billion people and is expected to reach 9 billion people by 2050. More importantly, “…Past and projected additions to world population have been, and will increasingly be, distributed unevenly across the world. The disparities reflect the existence of considerable heterogeneity in birth, death, and migration processes, both over time and across national populations …” (Bloom and Canning, 2004, p. 3). In this regard, it is well-known that most of the explosive population growth is mainly concentrated in developing countries, with the developed regions of the world succeeding in maintaining roughly constant the number of their inhabitants especially thanks to the migration dynamics from abroad. By taking the population growth rate as exogenous, in this paper we built an endogenous Romerian (1990)-type growth model with human accumulation, the objective being to analyze the long-run effects of population change on real per-capita income growth. One peculiarity of our contribution is that technological progress (the growth of the number of ideas) is explicitly recognized as (potentially) able to influence agents’ decision to invest in skill acquisition, the engine of economic growth in our model. Thus, and depending on whether technical change is postulated to affect positively, negatively or not affect at all human capital accumulation, we may have, respectively, “skill-biased”, “eroding” or else “neutral” technical change. Unlike the standard approach (in which population growth adds to the exogenous depreciation rate of per-capita skills), the presence of the growth rate of ideas in the law of motion of human capital acts in our model as an endogenous mechanism of depreciation or appreciation of (embodied) knowledge. This is important because it allows us in tying the effects of the population growth on the per-capita income growth to the nature and the direction of technical change. We find that, for the given type of technical progress, such effects may also significantly depend on the size of the agents’ degree of altruism towards future generations (the intuition being that this preference parameter influences households propension to save and, thus, to invest in human and R&D capital). Furthermore, we also find that, even in a framework where economic growth is explained by horizontal R&D (even though it is ultimately driven by human capital accumulation), population growth is neither necessary nor conducive to long-run growth in per-capita real income. Clearly, more work (both theoretical and empirical) is needed to resolve the ambiguities concerning the effect of population change on economic growth and to come to more definitive conclusions on this topic. As an example, from a purely theoretical point of view, it would be interesting to study how the results of this paper might change in the presence of an endogenous population growth (i.e., endogenous fertility and migration decisions). Moreover, it is well-recognized that population growth is only one (yet very partial) facet of global demographic change and that the shifting age structure of the world population is another aspect that certainly needs to be considered in the analysis. We leave these and other possible paths of study to future research.