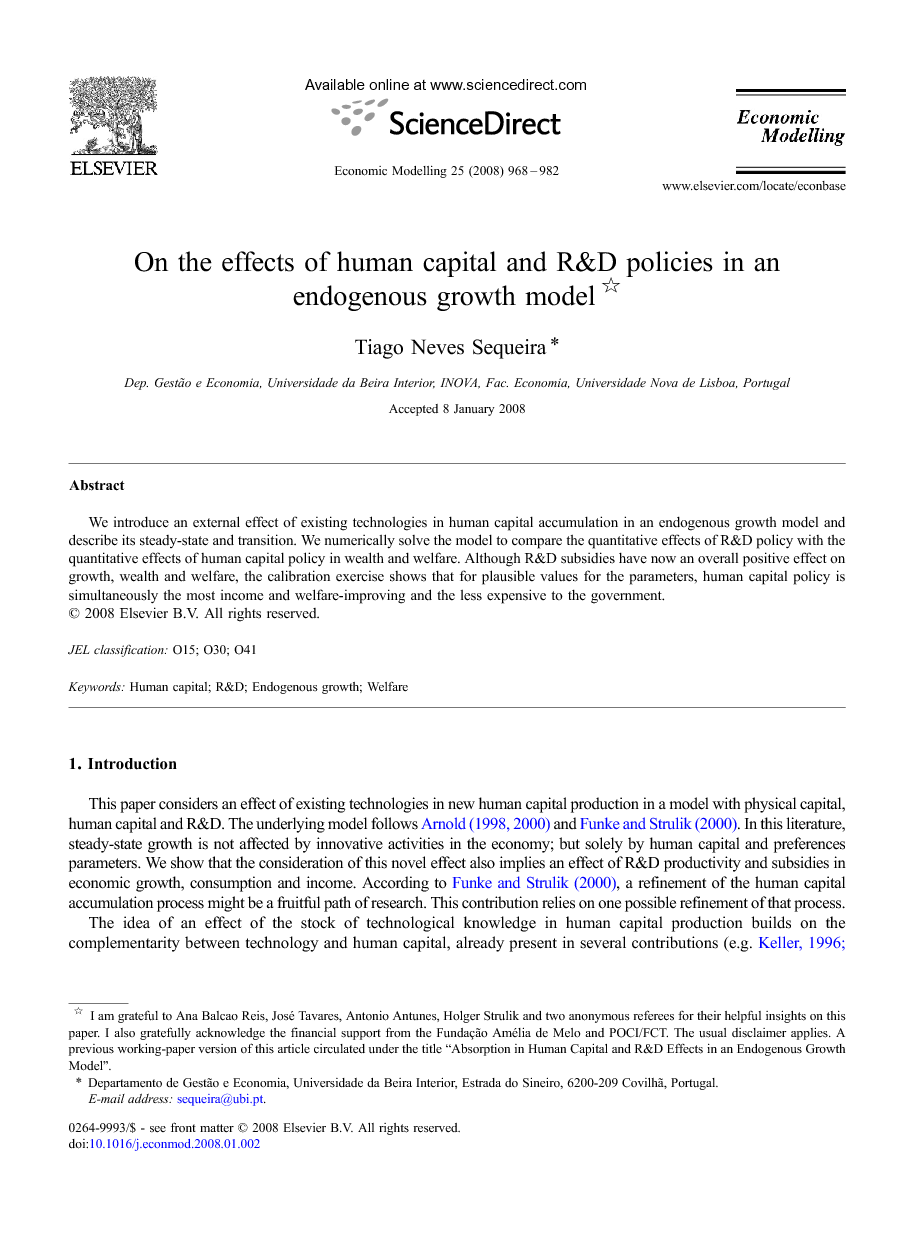 We introduce an external effect of existing technologies in human capital accumulation in an endogenous growth model and describe its steady-state and transition. We numerically solve the model to compare the quantitative effects of R&D policy with the quantitative effects of human capital policy in wealth and welfare. Although R&D subsidies have now an overall positive effect on growth, wealth and welfare, the calibration exercise shows that for plausible values for the parameters, human capital policy is simultaneously the most income and welfare-improving and the less expensive to the government.

This paper considers an effect of existing technologies in new human capital production in a model with physical capital, human capital and R&D. The underlying model follows Arnold, 1998 and Arnold, 2000 and Funke and Strulik (2000). In this literature, steady-state growth is not affected by innovative activities in the economy; but solely by human capital and preferences parameters. We show that the consideration of this novel effect also implies an effect of R&D productivity and subsidies in economic growth, consumption and income. According to Funke and Strulik (2000), a refinement of the human capital accumulation process might be a fruitful path of research. This contribution relies on one possible refinement of that process. The idea of an effect of the stock of technological knowledge in human capital production builds on the complementarity between technology and human capital, already present in several contributions (e.g. Keller, 1996 and Galor, 2005 and references therein). Some other references argue that in the final goods sector, technologies are absorpted by the production process (e.g. Eicher, 1996). Zeng (2003) studied the impact of policies in the long-run growth in a model with R&D and human capital in which R&D policies also influence economic growth. He had considered that human capital accumulation depended on both human and physical capital, a different human capital function than that used in this article. As a matter of fact, Arnold (1998: footnote 11) already mentioned that his “invariance results would no longer hold, however, if we include knowledge, A, or physical capital as an argument in the education technology”. While Zeng (2003) pursued the second approach, we pursue the first, proposing an intuitive function for human capital accumulation. Furthermore, as Zeng (2003) did not solve the model for the transition path, he did not provide a quantitative analysis of R&D and human capital policies. We intend to fill this gap. We do this calculating the whole transition path of a theoretical economy. In this sense, this article also provides an example of welfare analysis in the market equilibrium, which has not been done yet in this literature.1 In Section 2, we present the model and describe its transition dynamics and the steady-state. In Section 3, we describe the model quantitative properties and we quantitatively compare the effects of improving in education and R&D. Finally, we conclude in Section 4.

We add to Arnold, 1998 and Arnold, 2000 the consideration of technology as a source of human capital accumulation. We present the steady-state of the model, as well as its transition along a two-dimensional balanced growth path. This allowed for the influence of R&D in steady-state growth when compared to a more usual Lucas-type human capital accumulation, where R&D parameters do not influence steady-state values. This article complements that of Zeng (2003) as we include varieties (and not physical capital) in the human capital accumulation function. Furthermore, we calculate the complete transition path for the economy and focus on the effects of policy reforms using output, consumption and welfare measures and not only on steady-state growth rates. This paper also provides an example how to do welfare comparisons in an endogenous growth decentralized equilibrium, which has not been a focus of previous contributions in this literature. We carefully build a calibration exercise in which we considered a parameter for the influence of R&D policies in growth that is among the highest plausible values. The conclusions of our calibration exercises indicate that although R&D subsidies influence growth, wealth and welfare, the subsidies to schooling proved to be more income and welfare enhancing. Moreover, as in our “learning with varieties” economy human capital allocated to schools is relatively less than human capital allocated to research, the public expenditure cost of subsidizing human capital is still lower than the cost of subsidizing R&D. If a welfare enhancing public policy is to be implemented, the policy implication of our model is that even in an economy in which human capital is produced with existing technologies, a subsidy to education is both welfare-improving and cheaper in relation to a subsidy to R&D. These conclusions indicate that more important than the qualitative effect of policies are the quantitative and the relative impact of these policies. In perspective with previous models (without the “learning with varieties” effect), we would say that these quantitative results support that the models based on human capital intensive production of human capital would not introduce a high bias in quantitative predictions about growth and welfare policy effects. However, the transitional dynamics analysis reveals that both human capital and R&D policies can have positive welfare effects eventhough R&D policies have not steady-state effects. A quantitative analysis of the external effect of R&D (through “learning with varieties”) in human capital as a source of underinvestment in R&D may also be interesting as a topic of future research.