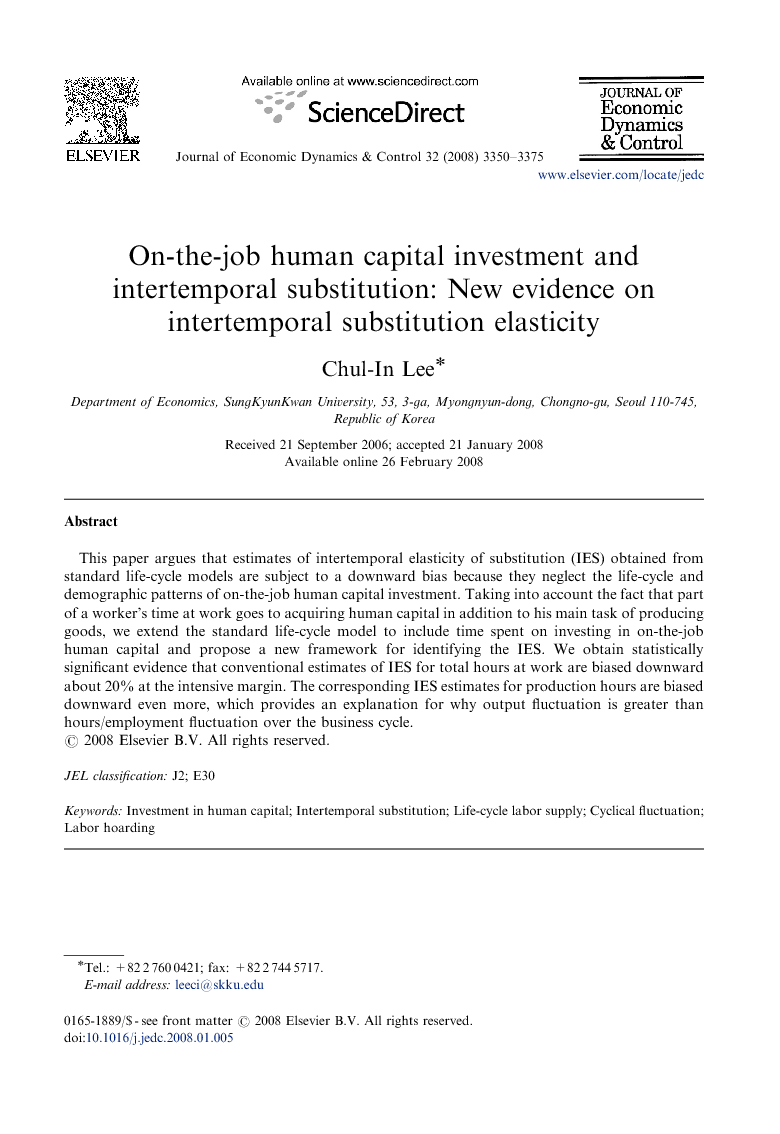 This paper argues that estimates of intertemporal elasticity of substitution (IES) obtained from standard life-cycle models are subject to a downward bias because they neglect the life-cycle and demographic patterns of on-the-job human capital investment. Taking into account the fact that part of a worker's time at work goes to acquiring human capital in addition to his main task of producing goods, we extend the standard life-cycle model to include time spent on investing in on-the-job human capital and propose a new framework for identifying the IES. We obtain statistically significant evidence that conventional estimates of IES for total hours at work are biased downward about 20% at the intensive margin. The corresponding IES estimates for production hours are biased downward even more, which provides an explanation for why output fluctuation is greater than hours/employment fluctuation over the business cycle.

Ranging from business cycles, pensions, and taxes, to welfare policies, the behavior of the intertemporal labor supply has been a central issue in various fields of modern economics.1 Motivated by its importance, many previous micro-empirical studies have estimated the response of hours to anticipated wage growth over the life cycle using longitudinal data (e.g., PSID) on prime-age working males (MaCurdy, 1981; Altonji, 1986; Lee, 2001, among others). This long tradition, however, overlooks the facts that: (i) a significant fraction of time at work (e.g., about 20% in the time-use data) is spent on acquiring skills along with producing goods and (ii) investment in human capital depends on time and individual characteristics: it tends to occur more actively at the beginning of a worker's career and may be more important for more educated workers.2 The time dependence of human capital investment has been noted as a potentially important issue by many economists (Mincer, 1974; Ghez and Becker, 1975; Heckman, 1976; Stafford and Duncan, 1985; Altonji, 1986; Mulligan, 1998, among others).3 However, the unavailability of longitudinal data on time spent investing in human capital does not permit micro-empirical studies on intertemporal substitution of the labor supply in a life-cycle model with investment in human capital. We extend the standard life-cycle model to include on-the-job human capital investment time and propose an empirical framework for estimating the IES using both longitudinal and cross-sectional data. Empirical results suggest that the conventional IES estimates using the hours variations at the intensive margin are underestimated because the life-cycle and demographic patterns of on-the-job human capital investment are not properly accounted for.4 With the distinction between hours at work and production hours, we also show that the sensitivity of production hours is greater than that of hours at work, which provides an explanation of why output fluctuates more over the business cycle than do hours/employment.5 The intuition behind our results is simple. On-the-job human capital investment is time-intensive, involving forgone production. Given that a worker's earnings arise from utilization of human capital during production time, the shadow value of production time should be constructed as earnings divided by production time.6 However, the conventional wage measure is unsuitable for our study because it is constructed as earnings divided by total hours at work, as if total hours at work were spent on production only. As a result, the conventional wage measure understates the true opportunity cost of production time. Our empirical evidence shows that this undervaluation becomes more severe for those who are in the early stage of their career and more educated. Under some conditions specified later, it leads to biases in IES estimates. In addition, another notable point is that the hours variable should be chosen carefully in accordance with the purpose of the research. In studies of the behavior of an individual's life-cycle labor supply or employment, we need to examine total hours at work, including time invested in acquiring human capital. But for a short-run macroeconomic inference on business-cycle variables such as fluctuation in aggregate output, production time may be the more relevant variable. In some instances, human capital accumulation is considered in the literature. Previous studies have used human capital variables such as age and education as instruments for wage growth (an endogenous variable in our context). For example, the pioneering work by MaCurdy (1981) and subsequent micro-empirical studies note that wages rise with human capital, and they view training and learning by experience in the labor market as the main source of human capital accumulation. But they do not consider the time devoted to investment in human capital, although doing so would seem to be a more consistent conceptualization of human capital as an investment that requires time as an input. As the data used in this paper show, individuals spend a significant fraction of their hours at work learning new skills; so we model human capital as a function of time invested in acquiring human capital and experience. More specifically, we first set up a life-cycle model with human capital in line with Ben-Porath (1967) and Heckman (1976) and then examine how incorporating human capital investment into the standard life-cycle model affects the conventional IES estimates. Next, we derive possible identification conditions by combining the information from a longitudinal database with a cross-sectional one. As an alternative way of looking at human capital accumulation, some studies consider human capital created as a by-product of market work, so-called learning by doing (LBD). Shaw (1989) presents an empirical model that considers the life-cycle labor supply with LBD. Another insightful paper by Imai and Keane (2004) addresses a possible downward bias in the IES estimates when fully taking into account LBD over the life cycle. While LBD would certainly be an important type of on-the-job learning, this paper addresses the more generally accepted form of human capital accumulation at work, on-the-job investment in human capital involving forgone output (e.g., various forms of formal or informal training at work), which is a topical issue in various fields, including labor economics, economic growth, and public finance, among others. This paper consists of four sections. Section 2 derives the intertemporal labor supply equation from an individual's optimization problem. We discuss the direction of bias from the conventional IV estimation. Section 3 presents a new estimation strategy and its validity by conducting a Monte Carlo simulation. We discuss how the 1976 SRC time-use data can be used to supplement the PSID to achieve a proper identification for the IES. Estimation results are provided in Section 4. The IES relevant to short-run business-cycle inferences is also considered with labor hoarding implications. A summary and the conclusion are given in Section 5.

While a worker's time at work is spent producing goods and acquiring human capital as well, the vast micro-empirical literature on the behavior of the intertemporal labor supply has not considered on-the-job time invested for acquiring human capital. This paper examines the behavior of the intertemporal labor supply in the presence of human capital investment and presents new empirical evidence by combining longitudinal data with cross-sectional data. The main contributions of the paper include the following. First, we propose a new framework for identifying the IES. Second, accounting for the human capital investment pattern over the life cycle in accordance with our model reveals that the conventional estimate of the IES was downwardly biased under some general conditions. Third, correcting for the bias arising from human capital investment, we obtain statistically significant evidence that conventional estimates of IES for total hours at work are biased downward about 20% at the intensive margin. Last, the sensitivity of production hours is again significantly larger than that of the usual IES estimates based on total reported hours of work, which provides an explanation for why output fluctuates more over the business cycle than do hours/employment. This evidence can also be viewed as accounting for the labor hoarding phenomenon without resorting to adjustment costs as in traditional labor hoarding models (e.g., Burnside et al., 1993; or Oi, 1962).