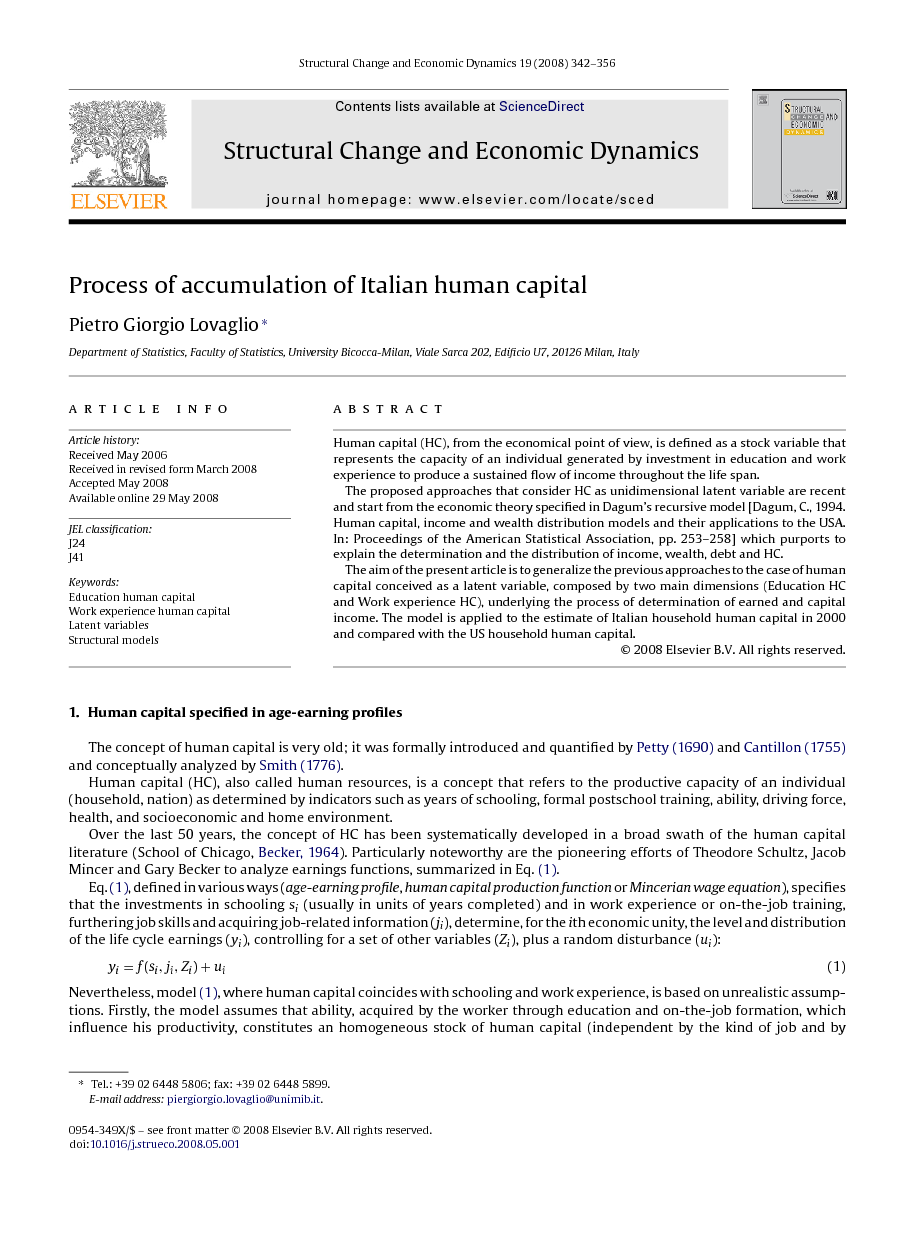 Human capital (HC), from the economical point of view, is defined as a stock variable that represents the capacity of an individual generated by investment in education and work experience to produce a sustained flow of income throughout the life span. The proposed approaches that consider HC as unidimensional latent variable are recent and start from the economic theory specified in Dagum's recursive model [Dagum, C., 1994. Human capital, income and wealth distribution models and their applications to the USA. In: Proceedings of the American Statistical Association, pp. 253–258] which purports to explain the determination and the distribution of income, wealth, debt and HC. The aim of the present article is to generalize the previous approaches to the case of human capital conceived as a latent variable, composed by two main dimensions (Education HC and Work experience HC), underlying the process of determination of earned and capital income. The model is applied to the estimate of Italian household human capital in 2000 and compared with the US household human capital.

The concept of human capital is very old; it was formally introduced and quantified by Petty (1690) and Cantillon (1755) and conceptually analyzed by Smith (1776). Human capital (HC), also called human resources, is a concept that refers to the productive capacity of an individual (household, nation) as determined by indicators such as years of schooling, formal postschool training, ability, driving force, health, and socioeconomic and home environment. Over the last 50 years, the concept of HC has been systematically developed in a broad swath of the human capital literature (School of Chicago, Becker, 1964). Particularly noteworthy are the pioneering efforts of Theodore Schultz, Jacob Mincer and Gary Becker to analyze earnings functions, summarized in Eq. (1). Eq. (1), defined in various ways (age-earning profile, human capital production function or Mincerian wage equation), specifies that the investments in schooling si (usually in units of years completed) and in work experience or on-the-job training, furthering job skills and acquiring job-related information (ji), determine, for the ith economic unity, the level and distribution of the life cycle earnings (yi), controlling for a set of other variables (Zi), plus a random disturbance (ui): Nevertheless, model (1), where human capital coincides with schooling and work experience, is based on unrealistic assumptions. Firstly, the model assumes that ability, acquired by the worker through education and on-the-job formation, which influence his productivity, constitutes an homogeneous stock of human capital (independent by the kind of job and by employers ability), secondly, it assumes that every worker possesses the same internal rate of return of education and, third, that everyone invests the same fraction of their capability to earn in formation. Various contributions in literature, starting from Griliches (1977), have discussed several problems affecting the estimates of the basic Mincerian wage equation, in particular the ability omission and selectivity bias. Many authors believe that, in Mincerian equation, the ability, having an important impact on productive potential and therefore earnings, is not perfectly described by the specified covariates. Several empirical investigations indicate that there exists indeed such a problem. The return of schooling appears to be underestimated because of this omitted variable bias (Blackburn and Neumark, 1993 and Blackburn and Neumark, 1995). Many authors (among others Griliches, 1977, Chamberlain and Griliches, 1975, Willis, 1986 and Card, 1994) consider, under different hypothesis and with different methods, the ability component. What seems to emerge from the comparison of methodologies and results is that the proxy variables used to explain the omitted components, are often disputable. To resolve the difficulties caused by unobserved characteristics many authors propose instrumental-variable (IV) estimation which includes additional variables (instruments) that affect the years of schooling, but are not correlated with omitted determinants of wages.

Until Dagum (1994), Dagum and Vittadini (1996), Dagum and Slottje (2000), Vittadini and Lovaglio (2007) and Dagum et al. (2007), sound and workable (operational) methods to estimate either the personal human capital were not available. This paper generalizes these approaches, defining HC as bidimensional latent variable (HC) and proposing a consistent estimation procedure, discussing the limitations of the traditional methods developed to estimate latent variables, specifically, LISREL and Partial Least Squares. Both approaches suffer by many drawbacks and are not applicable in this context (they do not support the presence of concomitant indicators and categorical data). Thus, a more consistent model is proposed in coherence with well-established economic theory that informs and supports the specification of relationships in the structural model. Firstly, the estimation procedure really estimates both latent variables respecting the economic definition (and the causal role in the structural model) of HC, as that stock of investment in education and work experiences (generated by formative indicators) to produce a sustained flow of income throughout the life span (reflective indicators). Secondly the LV scores have been estimated removing the effect of Wealth as concomitant block (impact on earnings, but not on HC dimensions), following essentially the Path Analysis rules that decompose the correlation between observed variables in causal (direct, indirect) and spurious effect. Finally, the proposal allows in model that estimates HC dimensions the presence of categorical indicators in the formative blocks, once having transformed their scores by maximizing the (Wealth adjusted) canonical correlation between the formative and reflective blocks. Applying the actuarial method, the monetary distribution of 2000 Italian household education human capital and 2000 Italian household work experience human capital are obtained: for each dimension, the estimation of each economic unit HC as a latent variable is benchmarked by the estimation of the average national HC in order to obtain estimates in monetary value. Finally, relationships between HC dimensions, income, Wealth and Debt are studied in a simultaneous system of equations providing a framework to advance socioeconomic policies on issues of an equitable economic growth by preventing problems of poverty and inequality. From analyzed data emerges that Education HC has less importance with regard to Work HC in producing future earned incomes, but presents an even greater level of inequality than income inequalities. Consequently, since personal HC and the market demand for that type and amount of HC determine the personal earned income, the increase of the amount of educational HC and the decrease of the inequality in its distribution will contribute to the decrease of the inequality in the distribution of earned income. Then, since personal wealth, and in a lesser extent Work experience HC, is the fundamental source of capital or property income, the decrease of inequality in the distribution of capital income seems obtainable with interventions on wealth distribution inequality, relegating the socioeconomic policies aimed at decreasing the levels of HC inequality to a marginal role. Therefore, the policies having as objective to reduce the inequalities in the distribution of educational HC and Wealth must be structural because they purport to achieve a target economic structure that would be able to generate economic processes of sustained growth with social equity. Furthermore, these policies will contribute to the realization of a dynamic process towards a steady decrease of poverty. Instead, income transfer policies, when not supported by a clear and well-designed structural policy, compound the problem rather than solving the poverty of nations. The income transfer policy alone not only does not solve the plight of the poor, it also supports a path through time that reproduces poverty from generation to generation.