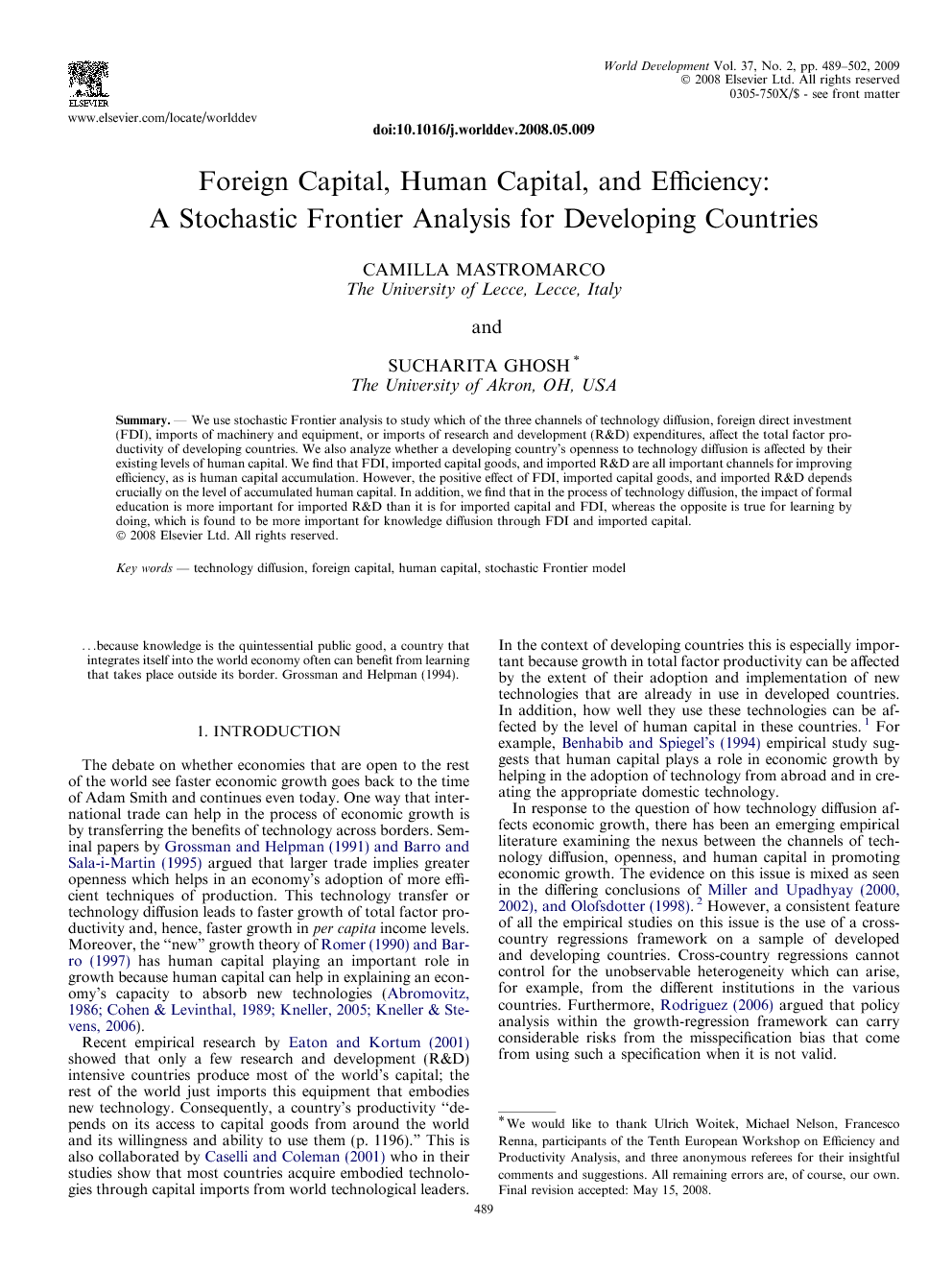 We use stochastic Frontier analysis to study which of the three channels of technology diffusion, foreign direct investment (FDI), imports of machinery and equipment, or imports of research and development (R&D) expenditures, affect the total factor productivity of developing countries. We also analyze whether a developing country’s openness to technology diffusion is affected by their existing levels of human capital. We find that FDI, imported capital goods, and imported R&D are all important channels for improving efficiency, as is human capital accumulation. However, the positive effect of FDI, imported capital goods, and imported R&D depends crucially on the level of accumulated human capital. In addition, we find that in the process of technology diffusion, the impact of formal education is more important for imported R&D than it is for imported capital and FDI, whereas the opposite is true for learning by doing, which is found to be more important for knowledge diffusion through FDI and imported capital.

According to the literature, the main channels through which the foreign technology diffusion occurs are through foreign direct investment, imports of machinery and equipment and imported R&D. Our paper contributes to the literature on the diffusion and absorption of technology by utilizing stochastic Frontier analysis and investigating all four potential sources of inefficiency, differences in human capital, differences in FDI, differences in machinery and equipment, and differences in imported R&D, for 57 developing countries, over the period 1981–2000. More importantly, this study differs from previous studies on similar topics by investigating all the three main channels which affect technology-catch up toward the Frontier simultaneously. We find strong evidence that developing countries differ with respect to the efficiency with which they use Frontier technology. We find that human capital, imported machinery and equipment, and imported R&D play a significant and quantitatively important role in explaining these differences in efficiency. Moreover, there is clear evidence that human capital affects efficiency both directly and indirectly through its effect on R&D, imported machinery and equipment, and FDI. While the growth literature underlines the important influence of human capital externalities on productivity growth, the empirical evidence on this issue is still incomplete and mixed. This research adds to the previous evidence on the human capital externalities by explicitly using various measures of human capital to better disentangle the differential impacts of the different human capital indicators on productivity. By using the Barro–Lee education data we find that the effect of R&D becomes stronger with the increase of human capital accumulation at higher levels of education and that the effect of R&D becomes very insignificant at very low levels of human capital. Another important measure of human capital is learning by doing which is an alternate source of human capital accumulation since workers can gain experience and improve productivity through working (Lucas, 1988). We find that FDI and imported capital have increasingly positive impacts on efficiency in the presence of learning by doing. This supports the view of complementarities between disembodied knowledge of multinational firms and the absorptive capacity in host countries. Given that there is little agreement on whether developing countries would do well in inviting foreign direct investment in a non-discriminatory manner, whether they should reduce industrial tariffs in particular for capital goods, and what role intellectual property rights plays in development, this paper has some significant policy relevance. The results in the paper lead us to conclude that the positive effects of multinational firms on the productivity of developing countries are not direct but through human capital. The absorptive capacity of each country provides a useful explanation for the differences in productivity. The evidence here suggests that developing countries that pursue relatively closed trade policies will not gain the benefits from technology implicit in international trade. This supports Hoekman, Maskus, and Saggi (2005) policy recommendations that argue for liberal trade policies for all countries. Furthermore, the governments in developing countries should facilitate the process of international technology transfer by encouraging the establishment of the necessary infrastructure and by providing incentives to support the development of domestic innovative capabilities.